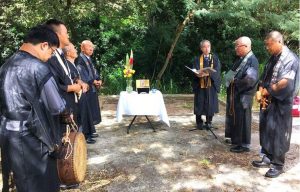 To the faces of my sleeping children

As I am taken prisoner

Into the cold night rain.

We traveled to a place long lost to history: the site where Honouliuli Internment Camp once stood.

Members of the Hawaii Buddhist Council, including Higashi Honganji Hawaii bishop Kenjun Kawawata and I, were there to conduct a special Obon memorial service last August.

Growing up in the mainland United States, the difficult World War II years conjured in me images of West Coast Japanese Americans forcibly sent to internment camps. I assumed those who lived in Hawaii escaped such fate due to their numbers and importance to the war effort. Visiting the Japanese Cultural Center of Hawai’i with my family earlier this year, I was surprised to learn even here, people of Japanese ancestry were monitored, interrogated and imprisoned. Honouliuli was the largest and longest-running of these camps, located in a remote part of Oahu that internees called jigoku dani (Hell Valley).

When we arrived, we could see why it earned its name. The hot sun beat down on backs. Little remained besides a broken old truck, metal siding from old guard shacks and a concrete foundation that once supported a camp mess hall. Nature already claimed much of the land, which was why the place was difficult to find.

As a portable altar was being set up, I recalled stories from the culture center and from Patsy Sumie Saiki’s book “Ganbare” about wartime Internment in Hawaii. I thought about the disbelief and fear first- and second-generation Japanese Americans felt following the attack on Pearl Harbor, especially after the arrest and interrogation of religious ministers, community leaders, and U.S.-born Japanese (“kibei” generation), who had attended school in Japan. They were ripped from their families and unceremoniously marched into holding camps when family, friends and their community needed them most. They had no idea when they would be released.

While we chanted “Tanbutsuge,” Rev. Kazunori Takahashi of Hompa Hongwanji Mission beat a taiko drum brought from Nichiren Mission. The drum was a piece of history from the era, inscribed with: “Prayer at Obon Service, on August 15, 1944, at the Honouliuli Confinement Camp.” The drum was used 75 years ago for memorial services for internees. Now the drum’s sound echoed back to a time when Japanese people, language, culture and religion were targeted by a fearful U.S. government. Any connection to Japan was cause for suspicion and grounds for arrest under martial law. I thought how people like myself and other ministers would have been arrested and sent away to a place like where we were now standing.

I thought of internees here and on the mainland, especially the aged and ill, who died before the war’s end, still unjustly imprisoned, never having regained their freedom. I thought of the Nisei who fought on behalf of the country that incarcerated their families, who gave their lives in Europe and on the Pacific Island islands, proving what should have been evident—loyalty to their country of birth. I thought of the shame my grandparents’ generation felt when facing an uncertain and oftentimes hostile future beyond the barbed wire.

Mostly they didn’t speak of their experiences during those years spent in camps or during a difficult period following as they reintegrated into a society that had imprisoned them. The shame of being branded disloyal and treated like an enemy took a terrible toll. With the war over, they avoided talk about the incarceration, memories of those times fading. The feeling of many former internees was “shikata ga nai”(“nothing can be done”), implying painful times are best left in the past.

Speakers at the service included Honpa Hongwanji Bishop Eric Matsumoto, Bishop Kawawata, Soto Zen Bishop Shugen Komagata and a descendent of a minister interred at Honouliuli. In their words, we could hear the calling cry of the dharma, asking us to remember and transmit the experiences of people who were interred. I felt a sense we must use those experiences towards building peace within and outside of our communities and turn those memories into a desire to ensure the tragedy of World War II internment is never repeated.

Shinran Shonin, the founder of Jodo Shinshu Buddhism, experienced a similar punishment 750 years ago when his teacher Honen and some disciples were targeted by the government. In his book, True Teaching, Practice and Realization of the Pure Land Way, Shinran wrote that when he finally found a teacher and community, the group was broken up, monks executed and others, including Shinran, banished to the countryside. Shinran’s exile changed his life, leaving him “neither monk nor layman.” Consequently, he developed a deep kinship with commoners and came to understand their struggles. He felt Amida Buddha’s primal vow was meant for everyone.

Today as racism, Islamophobia, anti-Semitism, prejudice and violence against marginalized groups of all kinds grow in this country, I hope that Japanese-Americans’ painful past inspires  solidarity with groups now targeted by hatred. For example earlier this year at Fort Sill in Lawton, Oklahoma, Star Trek actor George Takei and other Nisei former internees joined Native Americans, African Americans and Jews in protesting a plan to incarcerate migrant children at the site that once held Japanese Americans during World War II. Judging from current news stories about mistreatment, neglect and death at detention camps for migrants, history seems to be forgotten.

Designated a National Historical Monument in 2015 after decades abandoned and nearly forgotten, I hope Honouliuli becomes an educational center like California’s Manzanar, where the history of Japanese American internment is kept alive. I am thankful for the opportunity to learn about Honouliuli’s history and for the stories I heard about this painful past.