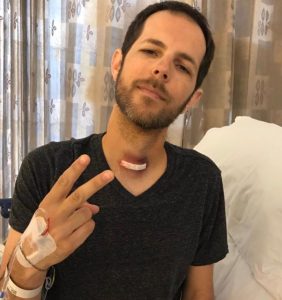 Usually in Spring, I get itchy feet—feeling the need to travel, go hiking or camping, just get away somewhere. It’s probably because I’m a schoolteacher and work gets busy. However, this year my journey took me to a place of frail health, physical weakness, and feelings of isolation.

Initially, two mysterious knots appeared on my neck that refused to vanish. A CT scan revealed a nodule on my left thyroid, as well as a parathyroid issue, responsible for unhealthy levels of calcium and possibly kidney stones.  At age 37, I was scheduled to undergo surgery just weeks after moving with my wife Alba into a new home.

The Buddhist teachings were constantly on my mind for days leading up to surgery. I meditated. I thought a lot about impermanence. Mostly I wanted to be calm. I noticed my family, friends and even doctors seemed calm about my condition. Maybe it wasn’t such a big deal. Never did I fear the worst, either losing my life or being severely impaired in some way.

Okay, I thought, this was going to be quick and easy, two-hour tops. I’d lose half my thyroid, but because I’m young, surely the other half would compensate. As I lay on the operating table, fear and anxiety engulfed me. Then, I felt the gentle hands of a nurse resting on my head, the human connection calming me.

The nurse asked what music I wanted to hear. I said Grateful Dead’s “American Beauty.” I thought, yes, this would be a simple and groovy procedure. The song Truckin’ filled my ears as I vanished from the world.

Seven hours later, I reappeared. Alba was at my bedside with a bounty of graham crackers and apple juice. The doctors found an abundance of cancer inside and around my thyroid which immediately took priority. They removed the entire thyroid gland. The parathyroid issue remained, even after hours of “poking around.”  A second surgery awaits in my near future.

Before the procedure I was an avid hiker. I could ride my bike easily between my house and Berkeley, about 12 miles of uneven terrain. I did yoga at least three times a week. At school, I was the high-energy teacher full of jokes and edginess who was impossible to ignore.

Now I was frail and unable to move around my new home. I was incapable of doing anything by myself. This weakened state lasted for such a long time. For days, I lay on a mattress on the floor because we hadn’t fully moved in. My dog wondered why I wasn’t being fun and my cat wondered why I was taking up his space.  On the Fourth of July, I wasn’t where I wanted to be—in Oregon with family and friends, celebrating the forest and each other. Instead I was laying in a dark room, with my pets, who seemingly understood my situation. I listened to fireworks, even gunfire, erupting outside my house in the neighborhood.

I eventually bounced back, regaining energy and health. Our house is a fixer upper and there’s much work ahead. We took a short trip to Maui, where I swam with a lone sea turtle before parting ways. I thought about the turtle’s challenges and they’re far greater than mine. I was feeling better, excited to return to work. Just as I get itchy feet at the school year’s end, my mind grows hungry at the school year’s start, making me long to teach again.

Buddhism returns to my thoughts. I think about karmic conditions. My treatment now is taking an “RAI,” a radioactive nuclear blast in pill form.  A doctor, gloved and masked, delivers the pill on a silver tray. It’s encased in lead and looks like a miniature missile. The doctor stands five feet away from me. I also wear gloves for protection. It’s ironic this dangerous pill consumed orally needs to be protected. I stay in isolation for three days. Meanwhile, Alba spends the week at my family’s house. Somehow amid the chaos and uncertainty, we’re expecting a baby, anticipating our lives will change forever next Spring.

From a Buddhist perspective, I am both humbled and awakened by this experience.  It’s easy to enjoy the Dharma when life goes well. When we’re young and strong, we believe we control our lives. The weakness I experienced frustrated and frightened me, but the vulnerability revealed how loved I am. I received an outpouring of visits, phone calls and letters from friends and family, apparently more worried than they appeared. So much love came my way that I couldn’t help but see it. I’m not sure what Dharma lesson I learned. I’m at a loss tying things together.

From a mattress on the floor I could see the sky turn orange and black. I saw silhouettes of trees, faces of loved ones, and my Sangha.  I’ve changed, and soon, my life will change even more when the baby arrives.  Before I stumbled upon the temple, I tried making sense of chaos I encounter on this path called life. Now I think perhaps chaos shapes me, helping me understand life.

Now I realize this past summer, I did take a trip. It was a trek filled with danger and uncertainty, but it wasn’t to a forest or mountain. It was a journey into ill-health that eventually turned inward. My souvenir is a scar on my throat, as if an errant branch scratched me as I walked by. I’m sore and my muscles are weak, but I’m getting better. The journey hasn’t ended. Life is a blank canvas, an open book. I feel my feet grounded in the Nenbutsu.

Mr. Deschenes is a member of Berkeley Higashi Honganji temple in California.