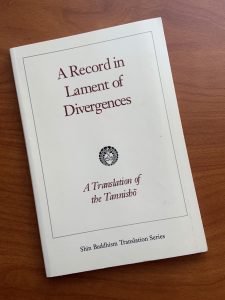 We American Shin Buddhists as “messengers” need to creatively find new and effective ways to communicate Shinran Shonin’s message in the West. As a tradition transplanted from Japan to America, the reality today facing both Higashi Honganji and Nishi Honganji is that to thrive in America—not simply survive—it must change. However, it’s not Shinran’s message that needs changing.

In reflecting upon my foolish thoughts and thinking of the past and present, I deeply regret that there are views deviating from the true entrusting (shinjin) which was taught orally by our late master, and I fear that doubts and confusions may arise among the followers who come after us. Unless we rely upon a good teacher with whom our karmic destinies are fortunately bound, how can we possibly enter the gate of effortless practice?

Yuien’s motivation for writing the Tannisho was his sadness at noting the deviations or misunderstandings among followers that surfaced after Shinran passed away. Because Yuien was a trusted disciple and possessed a clear understanding of his teaching, this work provides valuable insights into Shinran’s insights. For example in Chapter VI, he quotes Shinran clarifying a common over-estimation of one’s self-power:

“It is utterly unthinkable that among the followers of single-hearted nembutsu practice there are arguments about ‘my disciples’ and ‘other’s disciples.’ As for myself, Shinran, I do not have a single disciple. If I could make others say the nembutsu through my own devices, they would be my disciples. But how arrogant it is to claim as disciples those who live the nembutsu through the sole working of Amida’s compassion.”

Even Shinran’s son Zenran deviated from his teachings, forcing father to disown son because Zenran claimed to possess “secret teachings” (privileged information) from Shinran, among other things. This ubiquity of deviations indicates the ineradicable egoism of people, even in those trusted with propagating the teaching.

Shinran claimed Shin Buddhism presents the true teaching of Shakyamuni Buddha, which makes it a message of the Buddha himself. But often first-time visitors to our temples get a different impression, seeing instead an emphasis on Shin rituals, which are difficult to understand. In contrast, some American Shin temples are increasingly implementing Western-style English language lecture classes devoid of ritual.

Often when changes are implemented, either intentionally or unintentionally, accusations of deviation may appear, causing friction among American Sanghas and teachers, and also between American Sanghas and their Japan-based headquarters. Because ornate and often “exotic” rituals are a symbolic link to the Asian and Indian roots of Buddhist tradition, a question arises whether this lessening of the centrality of ritual in the temple experience is detrimental to the “message.”

But “deviation” per se isn’t necessarily negative. The word naturally has a negative connotation because “deviant” typically refers to unacceptable or even illegal behavior. However, “deviation” simply means departing from an established course or standard. Consider the evolution of Shin Buddhism and how the Seven Pure Land Masters clearly “deviated” from previous tradition because of various causes and conditions as they perceived the teachings were no longer effective as a path to buddhahood for common people.

Shinran’s teacher Honen was persecuted for “deviating” from Tendai Buddhism by emphasizing exclusive Nembutsu, yet this central point established an independent Pure Land school in Japan. Shinran “deviated” from Honen by emphasizing shinjin over nembutsu practice, although there’s a view that Shinran was simply clarifying the true content of Shakyamuni’s teaching.

Rennyo “deviated” from Shinran by aggressively propagating the teaching and then creating a rigidly structured institution, among other things. This institution, “Honganji,” preserved and promoted Shinran’s teachings despite considerable turmoil of the period.

About 120 years ago, Manshi Kiyozawa “deviated” from an institutionalized and conservative Tokugawa era Shinshu by emphasizing that “sprituality” isn’t tied to family lineage or hierarchical status, but rather is a subjective and deeply personal matter. It’s hard to overestimate his far-reaching influence. He interpreted and made relevant the essential teachings of Shakyamuni and Shinran, strongly influenced by the ancient Agama sutras and the Tannisho, revitalizing Shinshu for the 20th century.

Similarly, for contemporary American Jodo Shinshu followers, it’s clear our reality requires new adaptation. Not only has the 21st century brought to the forefront global issues not seen before, Westerners have unique non-Japanese intellectual and cultural traditions. Consequently if Shinshu merely is presented in its Japanese form, it will eventually disappear.

It’s crucial to critically examine the history of deviations in Higashi Honganji. To make this assessment, we must know the essence of the tradition. Looking at how this was done in the past, we see mixed results, as was the case with Rennyo. Going forward, it’s sure to be even more difficult.

But changes are coming in America. Hopefully those making changes will come from a deep appreciation of tradition. Yuien urges us to “rely upon a good teacher with whom our karmic destinies are fortunately bound,” meaning we must have a clear understanding of Shinran’s emphasis on shinjin. Then, changing the expression of the tradition—finding “expedient means” to communicate this teaching in compelling ways—won’t mean negatively deviating from it, but rather, clarifying its universal relevance for 21st century Americans.

Other stories by Rev. Hata:

Parting but not Farewell

Amida and the Statue of Liberty