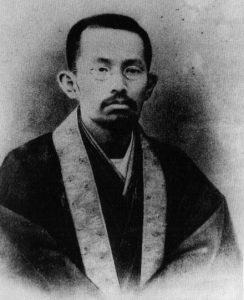 Despite a superior intellect, determination and iron will, Manshi Kiyozawa found his efforts to understand Buddhism completely futile. That’s when he grasped the meaning of life.

Rev. Kiyozawa (1863-1903) faced many hardships over the course of his short life of 40 years, constantly testing the veracity of the Buddha’s teachings, even at the cost of his health and ultimately his life. Trained in Western philosophy, he analyzed Shinran Shonin’s writings through a rational and experiential lens that brought Jodo Shinshu into the modern era. He is widely viewed as an innovative thinker whose students became influential teachers, such as Haya Akegarasu, Daiei Kaneko and Ryojin Soga.

Kiyozawa attended high school on a Higashi Honganji scholarship, then attended Tokyo University, where he studied Western philosophy. As a young man, he became principal of a temple-affiliated middle school in Kyoto, where he lived comfortably in a big house, wore fashionable clothes, smoked Western cigarettes and commuted by rickshaw.

Desiring to deeply understand Buddhism, Kiyozawa abandoned that worldly lifestyle and decided to follow severe asceticism, which he called “the minimum possible,” shaving his head, wearing only Buddhist robes and sandals, abstaining from meat and fish, and spending much time studying.

A year later, his mother passed away. Kiyozawa decided to follow an even more austere path, leaving his wife and children, practicing mendicant begging, visiting various teachers and limiting his diet to pine needles and resin, considered the humblest of all foods.

After five years of such practices, Kiyozawa contracted tuberculosis, a deadly disease. Although he pushed himself to the limits of human existence, he found himself sick, weak and unable to continue. He returned to his family and spent a year recuperating.

After somewhat regaining his health, Kiyozawa joined a reform movement that criticized Higashi Honganji leadership, which he felt focused too much on raising money and not enough on religious propagation. He and some sympathizers were expelled from the denomination. A year later, he was reinstated.

After losing his teaching position, seeing his reform movement dissolve, and facing financial problems, he moved with his family to his father-in-law’s temple, which did not need a second minister. Moreover, temple members found his Dharma talks difficult to understand and some people refused his visits for memorial services. He called himself “rosen” in Japanese, or “December fan,” referring to the uselessness of a fan in winter.

After being reinstated, Kiyozawa became the first president of what is now Otani University. However, his career was short-lived. After a student strike, he resigned and returned to his family’s home. In June of that year, his oldest son died. In October, his wife died of tuberculosis. The following April, his third son passed away. He still struggled with illness.

During this period, Kiyozawa wrote:

Kiyozawa passed away the following year. Just before he died, he wrote an essay called “My Religious Conviction,” expressing a deep spiritual awakening. He cites his trust in Tathagata, which he describes as “fundamental reality,” the source of life’s power. He wrote:

I thought at times that I had formed some ideas about my religious conviction. But one after another each of those ideas was smashed.

Such bitter experiences were unavoidable as long as I sought to establish religious conviction on the basis of logic or scholarly inquiry. After going through such a difficult process, I have come to realize that I cannot define good or evil, truth or untruth, happiness or unhappiness. Aware of my total ignorance, I have come to entrust all matters to Tathagata.

I trust in Tathagata because I realize that my intellect is limited. Except for the period when I was not serious about life, I always felt a keen desire to inquire into the meaning of my life. As a result of that inquiry, I eventually reached the conclusion that the meaning of life is inscrutable. That conclusion has led me to trust in Tathagata. Since not everyone goes through a process of inquiry in order to arrive at religious conviction, some might contradict me and say that it was not necessary to do what I did in order to gain trust in Tathagata. But I disagree. Such a course was necessary for me.

In my religious conviction I am now aware of the utter uselessness of my self-efforts. In order to realize this, I had to pursue all kinds of intellectual investigations until I finally came to the point where I recognize the utter futility of such efforts. It was an extremely painful process.

Before reaching that ultimate point, I thought at times that I had formed some ideas about my religious conviction. But one after another each of those ideas was smashed. Such bitter experiences were unavoidable as long as I sought to establish religious conviction based on logic or scholarly inquiry. After going through such a difficult process, I have come to realize that I cannot define good or evil, truth or untruth, happiness or unhappiness. Aware of my total ignorance, I have come to entrust all matters to Tathagata. This is the most essential point in my religious conviction.

Kiyozawa’s words reflect how he struggled futilely to take full control of his life. In realizing that life is created by a power beyond himself, he suddenly felt freed from worry and anxiety caused by a desire for a life that conformed to his wishes. Finally, he was able to accept life however it unfolded.

In this world that demands decisions, I cannot make up my mind to move either left or right, forward or backward. Such a person can live calmly and peacefully in this world by the fundamental source of power, which I call Tathagatha in which I trust… Nothing else can give me such tremendous happiness as my religious conviction.

Kiyozawa’s story tells us how even a person of brilliant intellect and tremendous will was blinded by belief in his own powers. His efforts to find fulfillment in a career failed. His efforts to find spiritual salvation by practicing extreme disciplines failed. Only when this belief in himself was crushed by illness, job loss, and the deaths of loved ones, did he discover life’s true meaning.

The great truth is that life—one’s existence and happiness—isn’t the result of self-centered efforts to please oneself. This fallacy is revealed when a person is stripped of their self-power efforts. This was the great lesson learned by Kiyozawa. This life actually is given by a power beyond self, a mysterious coming together of causes and conditions. This is the meaning of Tathagatha.

Rev. Yamada is editor of Shinshu Center of America and is based in Berkeley, California.