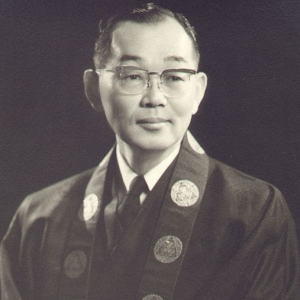 My first meaningful encounter with Buddhism came through the book “Everyday Suchness.” Why my best friend’s mother gave it to me, a mere primary schooler, I couldn’t say.

You could read that little book in a night, but its stories about everyday life and lessons stayed with me. I didn’t know Buddhism, but somehow its author, Rev. Gyomay Kubose (1905-2000), was teaching me.

Now fifty years later, I still remember certain stories, especially about a mother in California’s Central Valley, who in the early morning, always watched her son drive off to work in a vegetable truck.  “She stood there until the truck’s lights disappeared on the distant highway,” Rev. Kubose wrote. One morning, forgetting something, he parked the truck and walked through the dark fields back home.

“As he approached the house he noticed a figure in the corner of the porch near a window. It did not move… After wiping away her tears, the mother softly said, “Johnny, this is not the first time for me to be standing here. Every morning I stand here long after your truck’s lights disappear yonder, hoping that you will be safe and you will not be tempted by gamblers and drinking friends… Johnny, you will never disappoint me?”

Touched by his mother’s concern, the young man afterwards did indeed change his behavior.

Rev. Kubose wrote: “Too often we take things for granted. Though we do owe so much to our parents, too often we treat it as a matter of course. More than that we complain, and some people make their parents suffer.”

I met Rev. Kubose when I was a kid in the 1960s. He visited my friend’s house and I was invited. I guess my friend’s mom thought it a good idea. Kubose-sensei visited Berkeley from Chicago, where he founded the Buddhist Temple of Chicago. I didn’t think about it much at the time.

Little did I know he was an esteemed Buddhist teacher, born in San Francisco and raised in Japan. He graduated in philosophy from the University of California, Berkeley, and was a disciple of Higashi Honganji’s legendary teacher Rev. Haya Akegarasu, traveling with him throughout Japan and to China and Korea. He also studied at Otani University and spent World War II in a concentration camp at Heart Mountain, Wyoming.

Rev. Kubose had a knack for explaining Buddhism through simple stories with easy-to-understand lessons. His book, “Everyday Suchness, Buddhist Essays on Everyday Living,” was first published in 1967, and since then, republished multiple times (a copy I have is an 11th printing). With chapter titles such as “Happiness,” “Awareness,” “Limitations,” “Honesty,” and “Life without Regret,” it reminds me of the popular book series “Chickensoup for the Soul,” described as “inspirational stories about ordinary people’s lives.”

But Rev. Kubose’s book also dives into deep philosophical discussions about nirvana, non-dichotomization, “other-power,” and ego attachment. He freely quotes philosophers and teachers such as Hegel, Kierkegaard, Kant, and Gandhi. Trained also in Zen Buddhism, he sprinkles in Zen stories and anecdotes.

For me, his simple stories are most memorable and telling.

There’s one about a devoted Buddhist follower and his son, a university graduate who thought religion was nonsense. The son insisted his father stop going to “church,” especially when the minister didn’t seem to practice what he preached.

The father said he’d quit going if for the next two weeks, the son would keep a diary of everything he said, thought and did. Easy enough, the son thought. He honestly kept a record of his thoughts, words and actions, but after one week, he was ashamed to show it to his father.

“Well, you see son, we all think we are good and that there is nothing to be ashamed of, but if we strip ourselves and look into our own ego self, we are very selfish and we do a lot of things we do not want other people to know about. That is the very reason I go to church. I do in order to look into myself, for that true inner peace that comes from self-introspection, and as for myself, for the first time I am able to forgive or understand other people’s faults and shortcomings.”

Rev. Kubose writes, “Going to church is not learning what Buddha said or what is said in books, but being able to see what we are and living our own life according to its limitations.”

People often think Buddhist teachings are abstract, difficult to understand and hard to attain. Yet when Rev. Kubose explains them, they immediately make sense and seem within our reach.

He wrote about a friend, whom he described as “intelligent,” “a community leader,” “very capable,” and “very learned.” His wife often felt inferior in his presence. But when his eyesight began to fail, and he needed help from others, he suddenly saw his wife’s plight.

He said to her:

“I realize for the first time what you have suffered for so many years. We have been married almost 20 years. I was so stubborn; I had such a superiority complex. All your years of ill health were caused by my stubbornness. For the first time I understand real kindness, the many services you did for me which I never appreciated before.” Both of them hugged each other and cried, a cry of joy.

He was a “completely changed man. He was enlightened. He was enlightened to a completely new world. He had transcended his small petty individualism and was able to see and join in a greater world and oneness of all life. He found himself in a world of love, of friendship…

Rev. Kubose wrote, “Enlightenment was not just Gautama Buddha’s, but you too, individually, must find this new perspective in life, this new point of view in your life and in all things.”

Here’s a link to a video about Rev. Kubose’s life:

A Life of Oneness: Rev. Gyomay Kubose and the Fundamental Spirit of Buddhism (documentary video)