As I write this, we just completed our 2021 Obon summer memorial and dance. Of course, it was part “virtual,” like the Bon Odori dance and entertainment, and part “live,” like the Hatsubon and Manto-e services. In any case, Obon was successful thanks to the contributions of countless people.

Obon is our temple’s biggest fundraiser, and the donations and revenue generated by the hard work of our members allow the temple to continue to exist. However, Obon also is a time when we’re reminded of the Buddha’s teaching of impermanence, the truth-reality that all things are in constant flux, all things are constantly changing.

At the temple’s board meeting in May, I officially announced my plans to retire and that I had begun receiving Social Security benefits. I also said that, although I wish to remain a Higashi Honganji minister, I would resign from my position as full-time staff minister. I would fulfill staff minister responsibilities through a transitional period, but the date I wished to fully transition from full-time service was September 1.

My decision to resign as staff minister was actually made years ago. I informed Rinban Noriaki Ito of my wish in 2019. The primary reason behind this decision is my lifelong background as a professional musician, first with the band Hiroshima, then as a jazz musician and music professor at California State University Los Angeles. 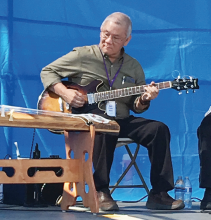 For the past seven years I served at the Los Angeles temple, and for two years before I served at the nearby West Covina Buddhist Temple. I hoped to continue my music activities while serving as minister. However, as I explained in my resignation letter to the board, both “paths” require a full-time commitment. I found out the hard way that realistically, it’s impossible to simultaneously walk both paths.

Studying and sharing the Buddha’s wisdom with others continues to be a deeply rewarding experience, but for me personally, it cannot replace studying and sharing music. My last service at the temple was August 29. I was hoping to personally thank everyone for supporting me, and also my wife Diane.

Who knows what the future holds? I personally hope that conditions arise for us to come together in the future.