Is it really? Or just illusion? What makes such images appealing to us?

The Buddha contemplated this phenomenon more than two millennium ago and called it,  “name and form” (Sanskrit: nāma-rūpa). In other words, our minds attach names to objects (and vice versa), giving what we see real existence. Consequently, desires arise, and along with them, passions.

“Name and form” are symbolized in Tibetan Buddhism’s “Wheel of Life” mandala, which shows different aspects of the human condition. One panel shows people riding a boat. People represent “name” and boat represents “form.” In order for something to exist in our minds, it must have a name and form. Thus, “name and form” become reality. 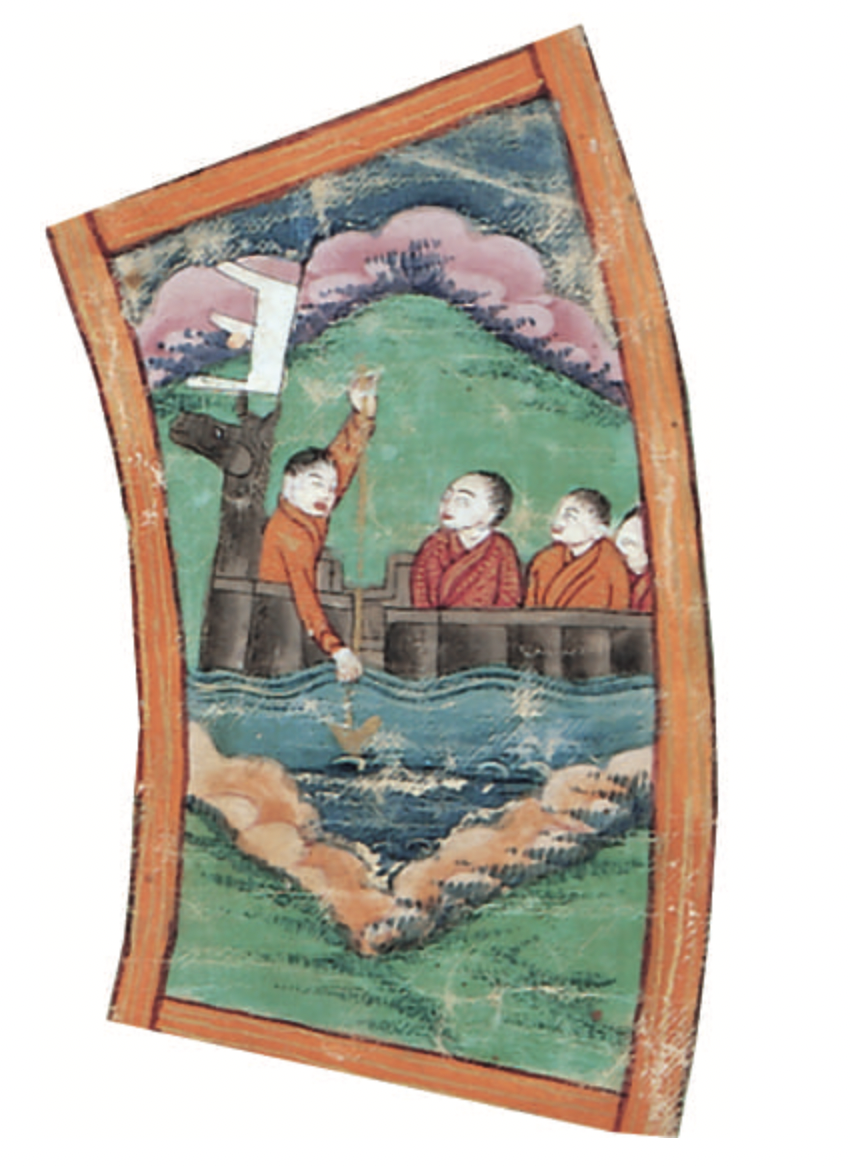 You can see how this works in our everyday life. Imagine a young woman on a beach, sipping a tropical drink, which easily conjures thoughts of “Hawaii,” “vacation,” and “good times.” It’d be nice to go there.

This type of image-making forms the basis of advertising and marketing. Brand names such as “Mercedes,” “Prada,” “Rolex,” and “Gucci” imply luxury and wealth.  Names are all around us, evoking various thoughts, desires, and feelings. For food, the words “filet mignon” make mouths salivate. Likewise for places (“home”), schools (“university”), partners (“attractive”), jobs (“high salary”), bodies (“healthy”), our activities (“productive”), the list is endless. The same is true for negative words, such as “poor,” “illness,” “old age,” and “death.”

In other words, our minds act and react to the world of names and objects. The problem is that this world becomes the only one we see. Our identities and how we think and feel are imprisoned by this world and blinded to the bigger picture of how the universe really works, in other words, “true reality.” Our life becomes defined by names and objects which are tied to status, self-esteem, possessions, wealth, love, accomplishments, happiness, and misery.

In this way, Rijin Yasuda (1900-1982), an influential Higashi Honganji Buddhist teacher felt people don’t live in a world of direct experience. Rather, they live in a world created by names and form, which are merely provisional. “Discriminating among names and objects is the basis of human existence,” he wrote.

The fundamental problem is that names don’t capture the true essence of an object. They are not the thing itself, rather, merely a representation of the thing.

Yasuda understood how thoughts and perceptions are shaped by “names,” i.e. names given to what’s essentially “nameless.” Consequently, “names” become “objects” in one’s mind, which actually may or may not exist. Names are only incidental to objects. They are not the objects themselves.

Giving an example of a flower, Yasuda said people think a flower exists before they are conscious of it. But he said the “flower” only exists because of consciousness of it.

According to Yasuda, people think the concept of flower transmits the flower that actually exists without losing its true nature. In Buddhism, this is called delusion. It’s not that there’s something that causes delusion, but that humans are deluded about the fundamental nature of consciousness.

Human passions arise because people become attached to names and form in ways that are dualistic. As long as the mind engages in dualism—judging life in terms of likes and dislikes, positive and negative—one’s mind will never be “at ease,” as Yasuda described.

Consequently, humans live in a world constructed by names and form as their “reality.” This is not “true reality,” but rather, a person’s interpretation of “reality.”

Obvious examples of this conundrum I think are actors, athletes, singers, and other famous people who sink into depression or self-destruction because their world of fame and fortune has disappeared. The same is true in our everyday world when people lose jobs or spouses, relationships break up, when they become sick, or face death. The world they thought they knew is crushed and they become lost.

Yasuda writes, “Human beings do not exist in reality itself; rather they function within the context of their interpretation [of reality]. Humans are able to function in and be concerned about the human world alone; they cannot function in a world that transcends humans. We are like silkworms who make cocoons and who live within the cocoons we ourselves make.”

In Buddhism, the true nature of reality is expressed in terms of “interdependence,” “oneness,” “impermanence” and “emptiness.” In other words, the truth of how all things are connected and how life is given by a power beyond our limited selves. To describe this great truth, Jodo Shinshu uses the terms “suchness” and “Tathagata.” In grasping the true nature of reality, one’s mind naturally is put “at ease,” according to Yasuda.

Influential Buddhist teacher Manshi Kiyozawa (1863-1903) suffered many hardships over the course of his short 40-year-life. Despite a brilliant intellect and iron will, he ended up losing his teaching position, his health, and family members to illness. During this period, Kiyozawa wrote:

After reaching rock-bottom, he awakened to the great truth of his life, which he called “trust in Tathagata.” Just before he passed away, he wrote an essay called “My Religious Conviction,” expressing his spiritual awakening, citing his trust in Tathagata, which he describes as “fundamental reality,” the source of life’s power. He wrote:

In this world that demands decisions, I cannot make up my mind to move either left or right, forward or backward. Such a person can live calmly and peacefully in this world by the fundamental source of power, which I call Tathagata in which I trust… Nothing else can give me such tremendous happiness as my religious conviction.

To me, these words express a way of seeing beyond one’s selfishness that’s fueled by “name and form.” Instead we’re encouraged to see our connection to others, to the environment, to everything around us, to the universe. This greater view of life becomes a solid foundation providing strength when the world of name and form falls apart. The words, “Namu Amida Butsu,” reminds us of this connection to Infinite Great Life.