Jodo Shinshu Buddhism is welcoming, open, and holds no secrets. Yet, some people follow a “secret” kind of Shinshu, off-limits to outsiders.

Such groups existed ever since Shinshu’s founder Shinran Shonin’s time. Called by various names, including “hiji bōmon” (secret dharma) and urahōmon (hidden teachings), members follow a tight-lipped tradition of closed-door gatherings, obscure rituals, evangelical-like sermons, and teachings considered heretical by major Shinshu denominations. Noted Buddhist scholar D.T. Suzuki reputedly as a child underwent a secret dharma ritual, following his mother, who was a member. Such groups still are active today in Japan.Throughout history, members faced suspicion, persecution, banishment and even death, for their beliefs and practices. They have no professional clergy, instead are led by individuals called “zenchishiki” (good dharma friend). In the past, both Higashi Honganji and Nishi Honganji investigated and pursued such groups for fear they were spreading misleading teachings.

Clark Chilson, University of Pittsburgh associate professor, uncovered and wrote about such groups and their secretive practices in his book, “Secrecy’s Power, Covert Shin Buddhists in Japan and Contradictions of Concealment” (University of Hawai’i Press, 2014). “From the standpoint of mainstream institutional Shin,” he wrote, “…these covert forms of Shin are deviant.” 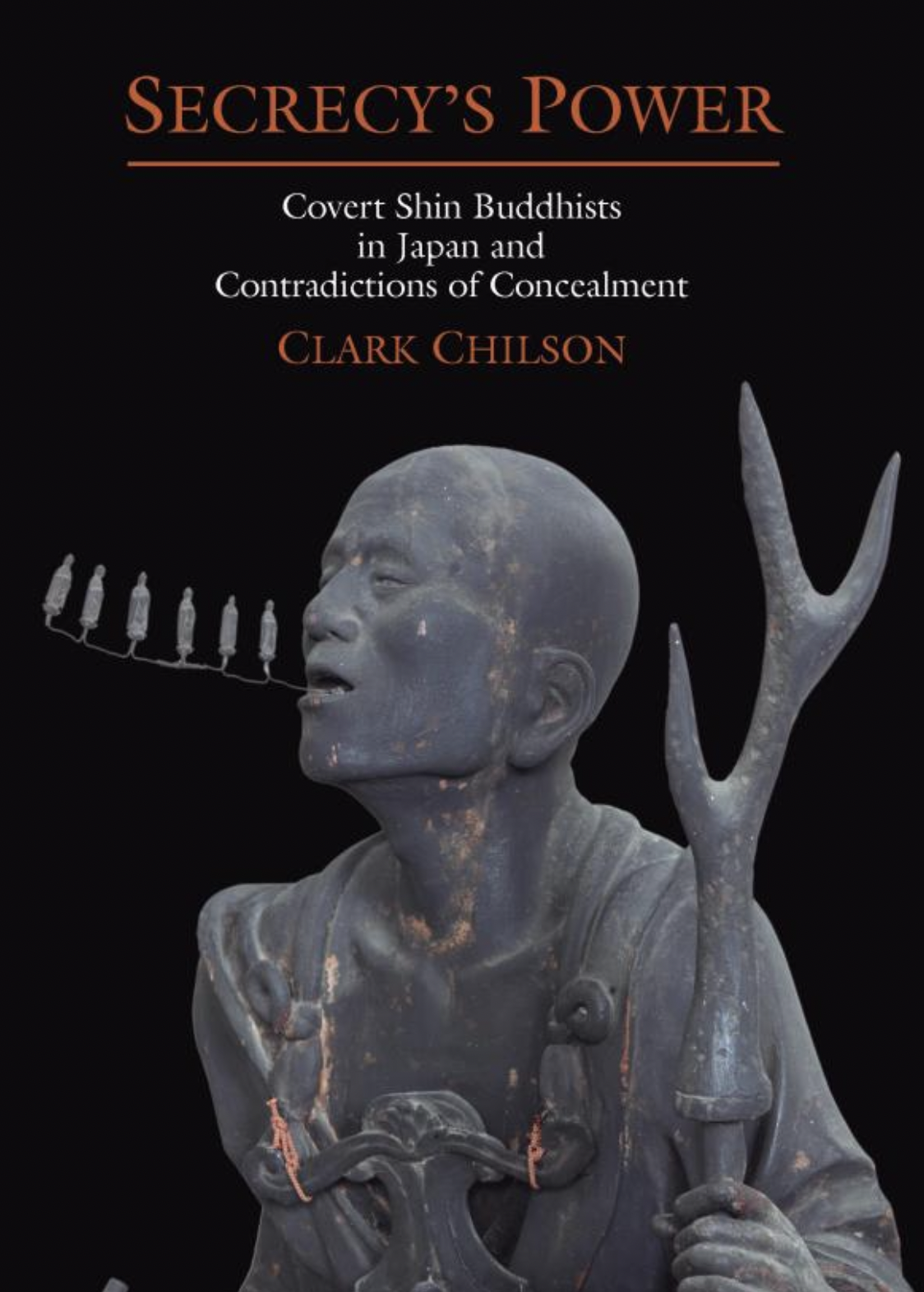 Nevertheless, “Hidden Shinshu” groups continue to perform rituals and follow their beliefs, although their numbers are dwindling. Chilson explored their history, teachings, rituals, and attraction, and why they continue to remain “secret.”

The premise of “secret dharma” flies in the face of generally accepted Shinshu teachings. Jodo Shinshu’s founder Shinran denied any secret teachings, instead humbly saying he only learned what he was taught from his master, Hōnen. In the text, Tannishō, Shinran says:

Each of you has come to see me, crossing the borders of more than ten provinces at the risk of your life, solely with the intent of asking about the path to birth in the land of bliss. But if you imagine in me some special knowledge of a path to birth other than the nembutsu or of scriptural writings that teach it, you are greatly mistaken…

As for me, I simply accept and entrust myself to what my revered teacher told me, “Just say the nembutsu and be saved by Amida”; nothing else is involved.

Moreover, when Shinran was 70 years old, he disowned his son Zenran for claiming secret teachings received from his father. In a letter, Shinran wrote:

I have heard that about ninety people who had gathered around Chūtarō of Ōbu have all followed you and abandoned the lay-monk Chūtarō, because you, having traveled there from Kyoto declared that only the teaching you have heard here is true and that all their saying of the nenbutsu for years is meaningless. How has such a thing come about?

The “secret teachings” that are widespread in Echizen province are certainly not the Buddha-dharma; they are deplorable outer teachings (gedō no hō). Relying on them is futile; it creates karma through which one sinks for a long time into the hell of incessant pain. You must never, never follow those who are still attached to these secret (teachings) and who, considering them to be of utmost importance, ingratiate themselves with others and deceive them. Separate yourself immediately from those who expound secret (teachings), lose no time in confessing them just as you have received them, and warn everyone about them.

In his research, which included interviewing leaders of secret dharma groups, Chilson found they followed alternative interpretations of Shinshu writings and teachings. According to one version, for example, secret teachings were started by Śākyamuni Buddha and passed down to the Seven Masters of Shin Buddhism, including Hōnen, Shinran’s teacher. Subsequently, Honen performed an initiation rite for Shinran in a small cave called Hotare no Iwaya.

Chilson wrote, “Hōnen’s disciple Seikaku (1166-1235) supposedly led Shinran to this cave, where Hōnen lit a candle and exhaled buddhas that Shinran inhaled. This inhalation of buddhas resulted in Shinran receiving the shinjin. After twenty years of trying to become a buddha by ridding himself of defilements (bonnō), Shinran finally reached Buddhahood as a result of this initiation.”

As for his son Zenran, he did not receive shinjin and he distorted the teachings, according to this interpretation. Instead, Zenran’s son Nyoshin preserved these “ultimate teachings,” which were transmitted for eight generations among top Honganji clergy. Breaking with tradition, Rennyo, who received these teachings, gave the teachings to nine lay disciples, such as Yoshimasu Hanshō, because he felt the clergy had become corrupt.

As evidence, Rennyo’s writings are cited. For example, he wrote:

Priests who are pillars of the Buddha-dharma have been seriously lacking in faith while companions have on the contrary undergone a decisive settling of faith.

Recently, … even priests of high position, ignorant of what our school teaches about the settled mind, severely rebuke those among their disciples who happen to go to places where faith is discussed and listen to the dharma; thus, at times, discord arises.

According to this interpretation, Rennyo condemned certain secret teachings he felt were wrong, but not all of them. In another letter, he wrote:

If there are any of you who have heard of the meaning of our tradition’s Other-Power faith and become decisively settled, you must store the truth of that faith in the bottom of your hearts; do no talk about it with those of other faiths or others [not of our tradition].

A characteristic of these teachings is the claim Shinran wrote a secret text, called Gosho. A copy of this text is kept by zenchishiki leaders and passed down to successor zenchishiki. These leaders are always laypeople because they believe taking money to perform religious services is immoral. Only zenchishiki leaders can admit new members and reveal secret teachings to others.

Perhaps the most notable characteristic is the “Ichinen kimyō” ritual, in which members are bestowed with shinjin (faith/understanding). Major Shin denominations don’t have any such rituals, considered a major shortcoming by secret groups. The ritual’s key is based on the Japanese word “tanomu,” generally interpreted in Shin as meaning “to rely on” Amida Buddha. However, “tanomu” also means “to ask” or “beseech,” which in this case means “asking” Amida for shinjin. Generally, there are no age limits for participants.

A former member recounted his experience receiving the ritual as a boy in 1942. He said: “Sensei instructed me to shout out tasuketamae (“save me!”) until I ran out of breath. I felt dizzy, but the assistant held me up so I would not fall over. Then, suddenly, I felt the blood rush from my body and, to use a colloquialism, I was only half-conscious. Then with each new breath I felt that the Buddha was entering my body. It felt like nothing I have ever experienced.

The zenchishiki leader senses whether the ritual is successful or not, and will shout out “otasuke ga arimashita” (you have been saved).

In 2001, research on a group called Kirishimakō revealed a practice that when a member passes away, the zenchishiki leader asks Amida Buddha to remove that person’s transgressions to help the deceased achieve birth in Pure Land. The zenchishiki also claims to have the ability to know whether or not a person has reached the Pure Land through a rite known as jōdo mairi (visiting the Pure Land)

Chilson cites a Kirishimakō traditional sermon that states, “for the salvation of sentient beings Amida submerged himself in a pond of blood and emerged on New Year’s Day… when Amida emerged, he spit blood up at the sky, creating the red color of dusk and dawn. New Year’s Day is the most important holy day in Kirishimakō, because it marks the beginning of salvation for all.”

Historically, some of these “hidden Shin” groups were driven underground by persecution and oppression. For example during the Sengoku “Warring Period”(mid-15th Century to beginning of 17th Century) in Japan, Shinshu groups rebelled against government authority in riots known as “Ikko ikki” (one faith uprising). Fearing such rebellion, authorities banned Shinshu in southern Kyushu, forcing Shinshu followers to hide their religious practices. Religious statues, ornaments and scrolls might be hidden in false walls in homes. Worship services were held late at night behind closed doors.

Other groups hid their activities from Honganji priests, who considered their practices heretical. Sometimes, these religious authorities investigated and punished members of these secretive groups. In 1754, a samurai following such practices investigated by Higashi Honganji was “tied to a pole and stabbed repeatedly in the chest and stomach,” according to Chilson.

Consequently the names of such groups, which could number up to hundred or more, included Futon kaburi (under the covers), Kakushi nenbutsu (hiding nenbutsu), Naishōkō (secret fraternity), and Yonaka no hōmon (Middle-of-the-night Dharma).

Another important reason for hiding their activities, according to Chilson, is a desire to protect Shinran’s “true teachings,” which may only be given to people considered “worthy.”

Not all such groups hid their activities under the cover of darkness. Chilson found that some groups formed associations with established temples, then followed their own practices away from prying eyes. A group that Chilson documents is associated with Kūyadō in Kyoto, a temple devoted to Kūya (903-972), a wandering ascetic who continuously chanted Amida Buddha’s name. Others claimed to follow Shinto, but actually adhered to their own secret Shinshu teachings.

Even in modern times, secret Shin groups continued to follow their practices, exposed sometimes inadvertently. For example at the end of World War II, the occupying forces distributed powdered milk to a malnourished populace, but in one village, some children refused to drink it. It turned out, they were from a secret Shin group that prohibited milk consumption for religious reasons. Likewise in 1959, some children refused to eat chicken in their school lunch because they were told it prohibited them from being born in the Pure Land.

Chilson found various reasons why groups keep their religious practices hidden, even when the threat of persecution no longer exits. For example, secret teachings and rituals can be found in other religions, making them not so unusual. Their traditions and rules promote and encourage secrecy practices. Secrecy also serves as a way to distinguish their practices, making them special and accessible to a privileged few. Secrecy also helps make leaders appear as remarkable teachers who possess extraordinary knowledge.

However, secrecy naturally engenders suspicion, distrust, wariness of wrongdoing, malfeasance, cults, and even strange or criminal behavior, he wrote.

The future of secret Shin groups appears uncertain and in decline, according to Chilson. The number of participants is diminishing, members are aging, and recruiting new members is increasingly difficult. Zenchishiki leaders also find it difficult to attract and train successors. Chilson felt some leaders spoke to him as a way of preserving a record of their practices.

Indeed, understanding the history and teachings of these secret Shin groups provides a fascinating look at how Shinran’s teachings have been understood,  misunderstood, and practiced by various teachers and groups over time.