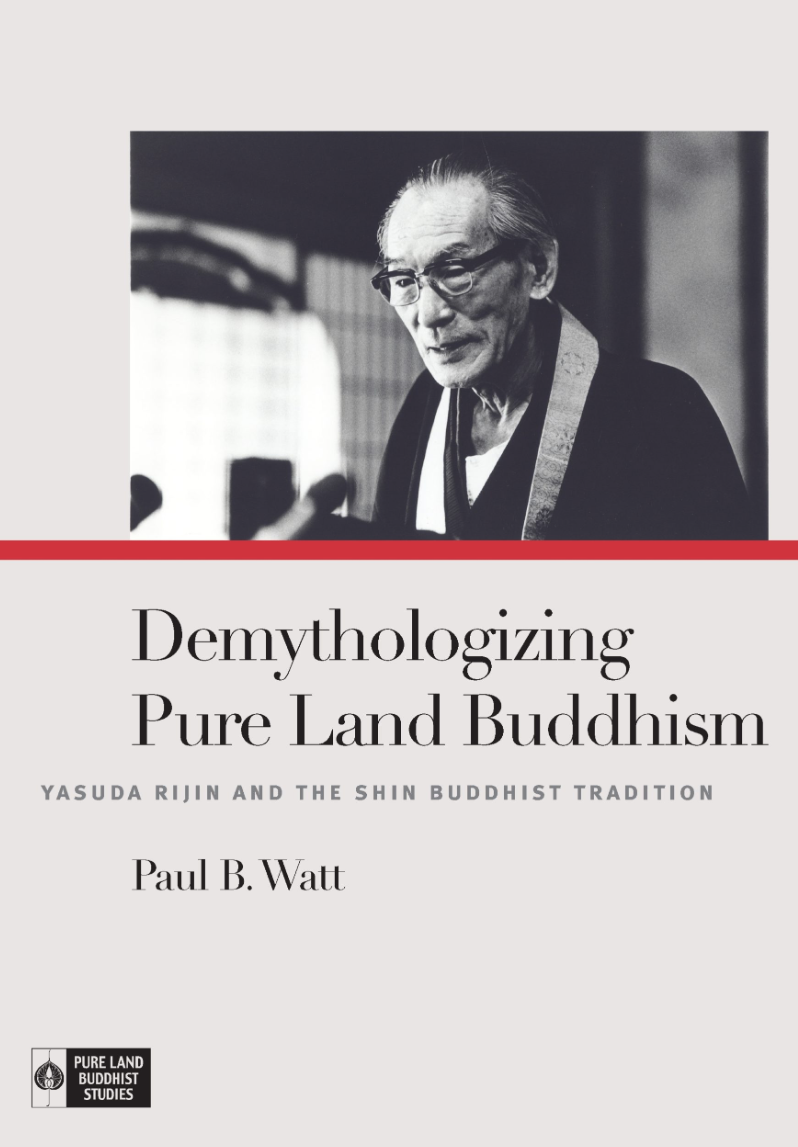 Among the most innovative—even radical—Jodo Shinshu teachers who emerged during the 20th Century was Rijin Yasuda.

Of those teachers, the most famous was Manshi Kiyozawa (1863-1903), known for his groundbreaking interpretation of Shinshu using Western thought and terminology. Following him were Haya Akegarasu (1877-1954), Daiei Kaneko (1881-1976) and Ryojin Soga (1875-1971). Their works are studied today and still debated, along with the related Seishinshugi (spirituality first) movement .

In the previous two centuries, Jodo Shinshu was stuck in a traditional interpretation represented by otherworldly Amida Buddha and an after-death Pure Land which were seemingly out of touch with modern life. Yasuda and the others dissected, analyzed and tried to make sense of Shinshu teachings in terms of the human condition. Ultimately, they felt their interpretation returned Shinshu to Shakyamuni Buddha’s original teachings.

For Yasuda (1900-1982), an ordained Higashi Honganji minister, the Pure Land and Amida were not “otherworldly realities,” but rather symbolic of an “inner reality,” that when discovered, had the power to put one’s mind “at ease.” He equated this process with discovering one’s “true identity.”

In 1960, Yasuda met noted theologian Paul Tillich (1886-1965), spurring him to clarify Shinshu for the Western world. He emphasized how, despite appearances, Shinshu wasn’t based on a Christian-like grace bestowed by an otherworldly figure. He explained karma meant, “one has a sense of responsibility for one’s existence.” In other words, “I myself create my destiny, not a deity.”

Yasuda’s perspective was shaped by Yogacara Buddhism, which delves deep into the nature of human consciousness and experience. Yogacara was founded by Asanga and his half brother Vasubandhu (4th to 5th Cent.), who Shinran Shonin cited as an important Pure Land master. Consequently, Yasuda felt people don’t live in a world of direct experience. Rather, they live in a world created by names and concepts, which are merely provisional. “Discriminating among names and objects is the basis of human existence,” he wrote.

Such mental discrimination in Buddhism is called dualistic thinking. As long as the mind engages in dualism—judging life in terms of likes and dislikes, positive and negative—one’s mind will never be “at ease,” as Yasuda described. Consequently human passions arise because people become attached to names and objects in ways that are dualistic.

Professor Lori R. Meeks, reviewing Watt’s book, described Yasuda’s writings as “not an easy read.” She wrote, “Yasuda tends to expand at length on a single insight or set of insights, often forgoing contextualization and restating key ideas multiple times, but in slightly different ways.” Watt describes them “more like meditations rather than philosophy.”

A lack of context made me wonder how Yasuda’s views apply to everyday life. Does he mean, for example, people’s attachments to wealth, status, and power—“concepts” and “names” without real basis—never lead to true human fulfillment? Stating reasoning without showing practical effect seemed to me like learning chemistry without knowing cooking when I wanted dinner.

Still, Yasuda’s analysis challenges our assumptions about what Shinshu really means, delving deep behind its words and meanings. Reading Yasuda’s essays, my university logic class came to mind. That class became an important basis for how I think, write, and analyze problems. I learned persuasive arguments must be well grounded in logic and reasoning.

The basics of logical thinking are like a math equation:

If all rubber ducks are yellow;

And I have a rubber duck;

Then my rubber duck is yellow

Yasuda applied this kind of rigorous logic, scrutinizing the meaning and origins of Shinshu terminology and concepts. Armed with this methodology and rationality, he unrelentingly tested the validity of Shinshu thought, which really hadn’t been done before.

In this light, it’s not enough to say, “Just call Amida Buddha’s name and you’ll go to Pure Land.” One must ask, “What is Amida Buddha?” “How does calling the name, ‘Namu Amida Butsu’ work exactly?” “What is the meaning of Pure Land?” “Why should I go there?” Yasuda opened the door to this kind of rigorous inquiry needed for Shinshu to be understood in the Western world.

Meeks wrote: “I also appreciated the deftness with which Watt [when translating Yasuda] draws parallels between Shin understandings of entrustment (shinjin) and the general insight, commonly articulated in Mahayana traditions, that enlightenment is ultimately about ‘the transformation of mind’ and ‘insight into the true nature of reality.’ When the Shin concept of shinjin is reduced to this definition, Watt explains, it sounds strikingly similar to Chan and Zen descriptions of enlightenment.”

Yasuda tackles Amida Buddha, not as an “other,” but rather, together with one’s self. He wrote: “Amida is one and the same with human beings. He has no form. Rather, through human action, the Tathāgata who has no form becomes form or takes form.”

Watt writes, “For Yasuda, perhaps the defining feature of Shin Buddhism is that it offers to ordinary human beings the possibility of a transformation of consciousness, the realization of the true nature of both self and reality, and the achievement in the present of a mind both at ease and engaged in the world. This, for Yasuda, is birth in the Pure Land.”

Such words transcend the notion that Pure Land is life after death. Yasuda sees Jodo Shinshu’s true path as spiritual fulfillment here and now in the form of mental peace of mind. That possibility puts Shinshu more in line with general Buddhist thought and brings much needed urgency and relevancy towards understanding Jodo Shinshu in today’s world.