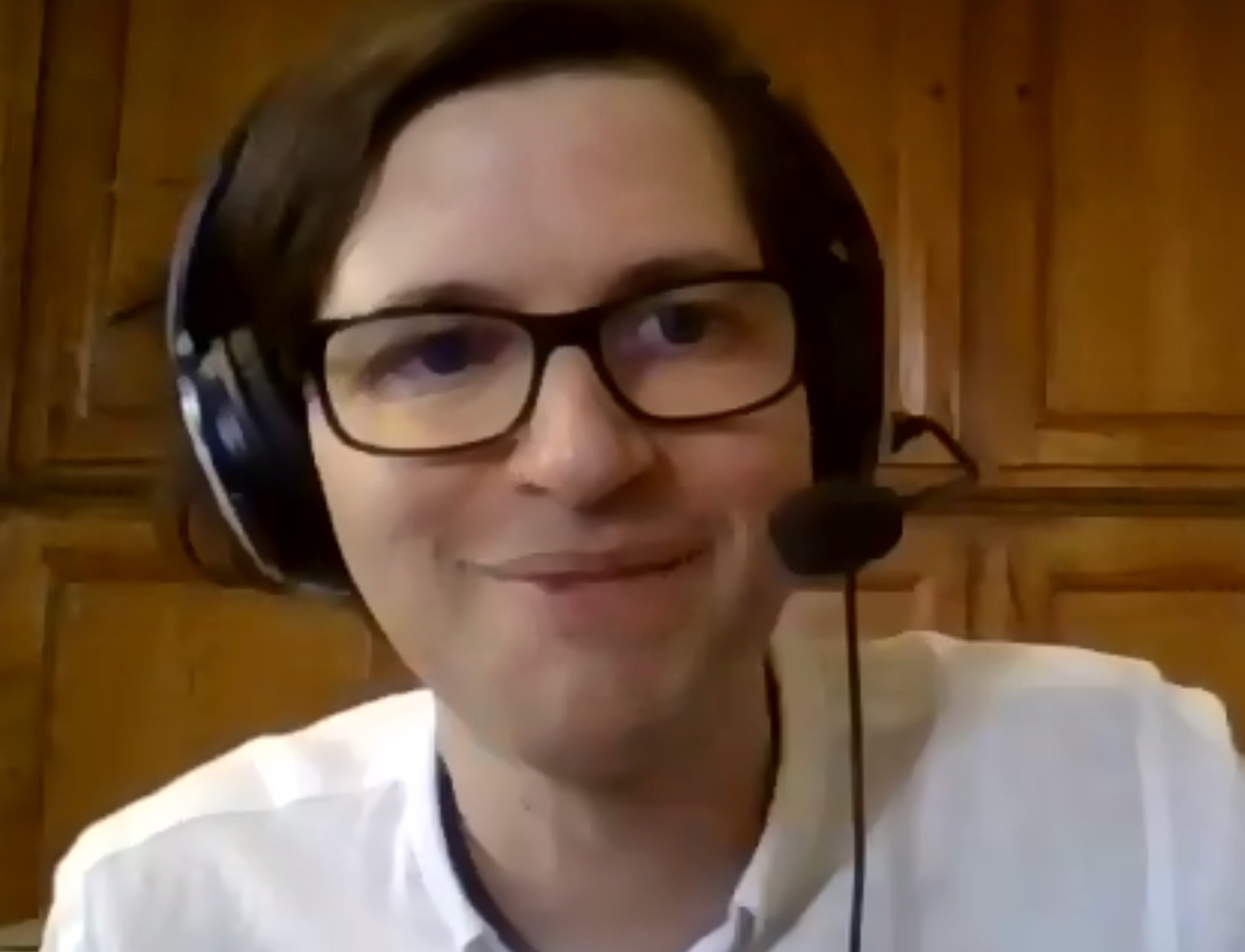 (In France, Gregory Thomas suddenly took a keen interest in Jodo Shinshu seven years ago, when he began reading all he could in English, translating works into French and eventually studying with Higashi Honganji’s Otani University professor Michael Conway. Last year, he started a French language Web site devoted to Jodo Shinshu, and also manages an active Facebook page. We recently checked in with him for an update on his activities. )

How do you see the current situation of Jodo Shinshu in France today?

In France, when people think of Buddhism, they usually first think of Tibetan Buddhism and also Zen, which is quite popular. Thai Buddhism also is here. There was a famous Zen master in France named Deshimaru Taisen in the 1970s and 1980s, whose students started their own temples here and in Europe. For Tibetan Buddhism, there are books in French about the Dalai Lama. Thich Nhat Hanh is popular here. Generally, I think French people wonder, “Is Buddhism a philosophy or a religion.” They really don’t understand the difference.

For Jodo Shinshu, it’s more complicated. There are no Jodo Shinshu temples in France. The closest resource we have is Jerome Ducor, a Japanese studies professor at the University of Geneva, who has a temple in Switzerland and has written books and articles about Jodo Shinshu and Shinran in French. Thanks to him, and his master Rev. Jean Eracle, we have translations in French of the Three Pure Land Sutras, the Tannisho, a biography of Shinran and other texts. He also wrote books targeted more toward researchers, such as a biography of Zonkaku, a descendant of Shinran who was disowned by his father Kakunyo, an early caretaker of Shinran’s mausoleum. Another challenge is these books usually aren’t available in general bookshops, although they still can be found on Amazon or in specialized bookshops.

I think we’re lucky because there are resources available for French people who seriously want to study the teachings. But we need more easy-to-read books that introduce Shinshu to French people who have only a general understanding of Buddhism. I think we need more books such as River of Fire, River of Water, by Taitetsu Unno, and Buddhism of the Heart, by Jeff Wilson. We need books in which people discover the everyday life experience of Jodo Shinshu followers.

How did you become interested in Buddhism and Jodo Shinshu?

I became interested in Buddhism after reading a book describing different traditions. Initially, Kegon Buddhism seemed interesting, but I decided to try first Theravada because it’s considered the oldest Buddhist tradition. I read a brief description of Pure Land, which made me think, “OK, this is not for me.” At the time, I also thought Buddhism was a philosophy more than a religion. I really didn’t understand what Jodo Shinshu was about.

I started with Therevada, but I soon became worried about the focus on severing human passions. I thought: “Why should I sever my passions? I like my passions. I’m a very passionate person!” I also had issues with the separation between monks and lay people. It seemed the only way to seriously walk the path in that tradition was to become a monk and leave the world behind. I really couldn’t do that.

I decided to try Zen Buddhism, but again, something felt wrong. The more I focused on my breath, the more self-centered I became. Zen was too strict for me.

While searching Wikipedia, I decided to look up Jodo Shinshu. I thought: “Maybe I missed something when I first read about this tradition. Let’s research it a bit more.” What I read made total sense—there’s no need to sever our passions; there’s no weird separation between monks and laypeople; this tradition welcomes everyone. This kind of Buddhism was less stern than Zen.

Initially, I tried to follow both Zen and Jodo Shinshu. Eventually, I focused entirely on Shinshu. I realized, “This is for me.”

What were you reading?

The first Shinshu book I read was Unno’s River of Water, River of Fire. I began reading all of the Shinshu books in English and French I could find, one-by-one: The Collected Works of Shinran, Kyogyoshinsho, Tannisho and others. But only after reading Cultivating Spirituality: a Modern Shin Buddhist Anthology, edited by Mark Blum and Robert Rhodes, did the teachings really make sense to me. The book is a compilation of essays by Higashi Honganji teachers, such as Manshi Kiyozawa, Ryojin Soga, Daiei Kaneko, and Rijin Yasuda.

Why did you start studying with Professor Conway at Otani University?

Two years ago, my company allowed me to take a six-month unpaid leave from my job as a biomedical engineer to study Japanese language in Kyoto. My goal was to eventually study Jodo Shinshu. Professor Conway allowed me to attend classes and workshops.

I’m a big fan of Manshi Kiyozawa and Ryojin Soga (influential Buddhist teachers from Higashi Honganji). Their approach was based on their personal experience. The way you interpret the teachings and the way those teachings enter your life, for me, are so important. Therefore when Professor Conway allowed me to study Soga’s teachings with him I was so happy ! We still meet monthly by Skype to study his English translation of Soga-sensei’s essays.

I think for French people, Higashi Honganji’s approach makes sense. For people who initially were Christians and are searching for spirituality, they don’t want to find the same vibe in Buddhism they abandoned in Christianity. Basically I was the same. That’s why I like Kiyozawa-sensei so much. His essay, “My Religious Conviction,” is a powerful statement. He says you can enjoy the Jodo Shinshu teachings right now in your life. You don’t have to wait until you die to enjoy this gift we’ve been given. It’s easy to do, just rely on the Infinite Compassion and Wisdom that is Amida Buddha.

What does the future hold for you?

We also began services online with the help of Rev. Jean Tetsuji from the Brazil Higashi Honganji district. On Skype, we chant Shoshinge together, followed by a Dharma talk by Rev. Tetsuji. I translated Shoshinge in French, so participants online understand what we’re chanting.

People enjoy reading about Jodo Shinshu on my website and Facebook. They sometimes ask for book recommendations or ask how they can participate in services. Usually these people tried other kinds of Buddhism but were dissatisfied. Then they discovered Jodo Shinshu. They usually don’t start with Jodo Shinshu.

I now live in a small village near the Swiss border but I plan to move soon to a larger space. Eventually, I hope to convert part of my new house into a meeting place for discussions and study classes for people interested in Buddhism. It’s important to have a physical space in France, where people can meet and discover together Jodo Shinshu.