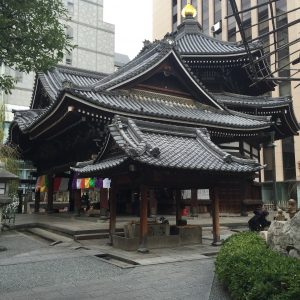 In this pandemic, you know following a stay-at-home order is tough. Now imagine Shinran Shōnin voluntarily secluding himself for 100 days.

As a researcher and translator, I’ve tried to dive deeper into the unknown, hoping to find a clearer picture of Shinran (1173-1263). Sometimes imagination helps tie disparate facts together into a unified story, which may or may not be true, but at least it’s a start. Others have done the same, even resulting in books and plays, for example Ruth Tabrah’s “The Monk Who Dared: A Novel About Shinran,” and the stage play, “Honen and Shinran,” written by Sakae Tajima, which premiered in the U.S. in 2010.

So let me take a shot at this point in Shinran’s life.

We know Shinran spent 20 years as a monk on Mt. Hiei, then left for Kyoto city, where he secluded himself at Rokkakudō temple. But why hide in the middle of a busy city? There are better, more remote places, for instance, Mount Hiei.

The generally accepted story says Shinran—frustrated by monastic life and spiritually unfulfilled—came down from the mountain to meditate before a statue of Kannon Bosatsu in Rokkakudō temple, hoping to decipher his future.

Shinran, who later became known as the founder of Jodo Shinshu Buddhism, soon afterward studied under Hōnen Shōnin, from whom he learned the Nenbutsu teaching—taking refuge in the Name of Amida Buddha—to which he devoted the rest of his life.

Many details of his life remain missing or unknown, so I’ll hazard a guess and say work brought Shinran to the city. After all, he was a trained scribe, having received an elite education on Mt. Hiei, where he mastered reading and writing classical Chinese, skills highly prized by government officials and aristocrats. His abilities certainly would’ve been in demand.

Therefore, it’s easy to imagine Shinran descending the mountain in 1201 for a commission to work on Hōnen’s Senchakushū (“Passages on the Selection of the Nembutsu in the Original Vow”), the Pure Land master’s magnum opus, comprised of many sutra quotations and commentaries written in Classical Chinese.

At the time, Senchakushū was not yet a completed work. Imagine Shinran being handed a boxful of assorted documents with orders to compile them into a consistent message. That scenario isn’t so far-fetched. Even today, scholars, scientist, judges and other experts facing a mountain of data employ research assistants doing the grunt work of reading, sorting, analyzing, and summarizing. These tasks were not just for any flunky, but rather, required the skills and intellect of a serious student of Buddhism. Think Shinran and check, check, check!

Historically, Kujō Kanezane (1149-1207), former regent and chief imperial minister-turned-disciple of Honen, requested his teacher to create the text. I imagine Kanezane hosting Shinran at his estate in Kyoto, not far from Rokkakudō. As a Buddhist project, Shinran would continue to lead a religious life, keeping to monastic precepts. I can see him each day visiting Rokkakudō as part pilgrimage, part break time, and part exercise.

We know about that time, Kanezane’s wife Tomoko passed away, prompting his daughter Ninshi (1173-1239) to enter Hōnen’s sangha community. By my reckoning, Ninshi, who was about the same age as Shinran, probably met the young monk, and maybe even (okay this may be a stretch) discovered they both enjoyed composing kanshi, poems in Classical Chinese.

I see her complimenting him on his Chinese characters (Japanese: kanji) writing. After all, he was no run-of-the-mill scribe, but gifted with an extraordinary poetic sense and language knowledge.

Perhaps Ninshi even heard her father was looking for someone to help Hōnen with the Senchakushū, so maybe she recommends Shinran.

Early in 1202, Kanezane was ordained by Hōnen into the Buddhist order. Kanezane’s younger brother Jien (1155-1228), author of the Gukansho (1220) and a senior Buddhist priest, had accepted a nine-year-old Shinran into the priesthood at Shoren-in temple years two decades earlier.

Interestingly, Kanezane also dreamed of Ninshi becoming the empress. Kanezane indeed became the Regent and Ninshi became a consort to the Emperor, but never the empress. With a shift in the power structure Kanezane’s regency ended in 1196 and Ninshi left the Imperial palace soon after. 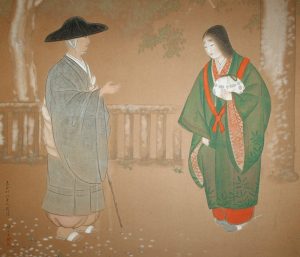 In “Life of Shinran” written by Zonkaku (1290-1373), Shinran meets a mysterious woman at Sekizan shrine in Kyoto in 1198. She discovers Shinran is going to Mt. Hiei and asks him to take her there to hear the Buddha dharma. He says the mountain is off limits to women. She exclaims that it’s odd, asking, “Have you never heard of buddha nature? Are you saying no female birds live on the mountain?” Although this episode is dubious, it’s easy for me to see Ninshi playing the foil.

According to Zonkaku, Shinran married Kanezane’s daughter Tamahi, although no other historical documents substantiate this account. By contrast, Ninshi’s existence is more documented, and given the circumstances at the time, I think Shinran must have met her at some point.

Here my imagination runs amok: Shinran’s job for several summers is working on Honen’s text at Kanezane’s home, where he always seems to bump into Ninshi. And guess what? They get along well, and maybe even, romance is in the air.

In his writings, Hōnen emphasizes how an ordinary householder can find spiritual salvation without following monastic precepts, which at the time, was like saying “commoners can be aristocrats.” Wouldn’t Kanezane have doubts? In my mind, I hear them talking:

Kanezane: “How can an ordinary married man with a family find salvation?”

Hōnen: “Just say the name of Amida Buddha and anyone can find salvation.”

Kanezane: “If that’s the case, prove it! Have one of your disciples (Shinran) marry my daughter!”

I imagine at the end of a third 100-day retreat and nowhere near finished, Shinran tells Ninshi he needs yet another 100-day retreat the following year to finalize the text. By this point, he has reviewed numerous documents and conferred with Hōnen numerous times. Ninshi hears many of these conversations.

In his writings, Hōnen expressed doubt women must transform into a male to be born in the Pure Land, as stated in a sutra. Hōnen wanted the dharma storehouse doors open to women all the way, not halfway.

I imagine Shinran taking a morning walk to Rokkakudō. Posted on a temple door is a poem (kanshi) written in Chinese:

When the devotee finds himself bound by his past karma

I will incarnate myself as a most beautiful woman

and become his object of love; and throughout his life

I will be his helpmeet for the sake of embellishing this world,

and on his death I will become his guide to the Land of Bliss.

This poem actually was recorded as Shinran’s dream by Zonkaku, but I imagine it written by Ninshi. Here we find the seeds of a new model of Buddhism, in which religious life springs from mutual love and respect between a man and a woman. Later, Shinran cites such sentiments in a hymn from his writings, Shōshinge.

In his writings, Shinran quotes this passage about Kyōshin (786-866), a devout Buddhist follower:

Kyōshin of Kako grew no hedge to the west,

always leaving that side open to the Land of Bliss.

Neither enshrining a Honzon image

nor owning any sacred texts,

to all appearances he was neither monk nor layman,

as he constantly turned his thoughts to the west

as if oblivious to all other matters.

What happened to Ninshi? I like to think Ninshi almost married Shinran. After all, by my reckoning, she got to know him well over the years. But Hōnen’s world imploded and he and Shinran were exiled to distant lands. She would not go with him.

Eshinni becomes the woman that history cites as Shinran’s wife. Ninshi’s name becomes lost in obscurity. To me, she’ll always be tied to Rokkakudō and Shinran’s 100 day-retreat. I just don’t have any proof… for now.

At least it’s interesting and fun to wonder. Any possible way of feeling closer to Shinran can’t be all bad, right?

-Rev. Yokoyama is a researcher and translator living in Kyoto, Japan.

Other stories about Shinran:

The Shinran You Never Knew

Kiyozawa: What was Shinran Thinking?