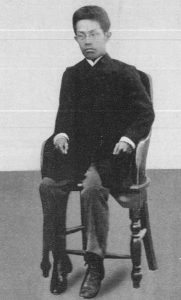 Someday I hope Shinshu teacher Manshi Kiyozawa will be widely recognized as a truly brilliant mind of the modern era. He not only entered the Shinshu Otani-ha (Higashi Honganji) denomination from the outside, his influence on religious thought extends far beyond his native Japan.

Thanks to the rigors of his early education, Kiyozawa (1863-1903) competently learned to read and write English and was curious about the greater world. A photograph of him as a schoolboy in Nagoya shows him dressed in a formal kimono, but his unkempt hair sticks out like a sea urchin. Being short in stature, his feet seemingly float from the ground.

A poor student from modest means and hoping to attend a university, he accepted a scholarship from Higashi Honganji. As a result, he became interested in studying Jodo Shinshu Buddhism as a college student and eventually began wondering about the motivation behind the teachings of Shinran Shonin (1173-1263), founder of Jodo Shinshu. What was the great master really thinking? It was at this time I believe Kiyozawa started searching for a baseline from which to understand Shinran.

At a certain point in his studies, I think Kiyozawa concluded that faith alone (Japanese: yuishin) must be the central theme behind Shinran’s writings. But he wasn’t convinced that was the only reason.

In an edition of Kiyozawa’s collected works published by Otani University in 2003, he explores the theme of morality, quoting numerous statements from Buddhist literature. Then he questions who are these people he’s quoting. In other words, what’s behind their thinking and what do they stand for? Are they talking from the standpoint of individuals who achieved spiritual enlightenment via superior intellect, discipline and effort? Or do they stand for the so-called unwashed masses with no chance for spiritual deliverance in this life?

I see a connection between these questions and when Shinran studied with his teacher, Honen Shonin. In a letter written in 13thCentury Japan, he writes:

There are the illiterate masses who do not even know

the simple letters for “good” and “bad”—

All of them are blessed within with the truest of hearts,

their knowledge of kanji such as good and bad—

They are nothing more than another fleeting form

in this empty world of lies and deceit.

(Hymns of the Dharma Ages (Japanese: Shozomatsu Wasan) No. 115)

They turn out to be those who neither know what is stilted and what is true.

With little pity or compassion for [the illiterate masses]

Fame and fortune motivates them to become teachers of the people.

(Hymns of the Dharma Ages (Japanese: Shozomatsu Wasan) No. 116)

Shinran, at age 88 years, reiterated those same thoughts in a letter written towards the end of his life:

I recall hearing the late Master Hōnen say, “Persons of the Pure Land tradition attain birth in the Pure Land by becoming their foolish selves.”  Moreover, I remember him smile and say, as he watched humble people of no intellectual pretensions coming to visit him, “Without doubt their birth is settled.” And I heard him say after a visit by a man brilliant in letters and debating, “I really wonder about his birth.” To this day these things come to mind.

(Lamp for the Latter Ages (Japanese: Mattosho), No. 6)

I feel Kiyozawa took to heart Shinran’s feeling for the masses, which is why he argued with denomination leaders at the time to focus efforts on spiritually nourishing temple members, rather than fundraising and what he viewed as materialism. His protests eventually led to his expulsion and excommunication from Higashi Honganji. He was later forgiven and died as a Higashi Honganji priest.

I encourage students and followers of Jodo Shinshu to learn from Kiyozawa, to search as he did, to find the true motivation behind Shinran’s thought, and to take to heart the true teachings.

Rev. Yokoyama is a translator of Buddhist works living in Kyoto, Japan, and former editor of Higashi Honganji’s The Eastern Buddhist academic journal. The translations in this article are entirely his own.