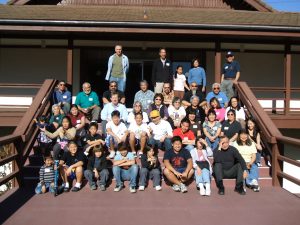 The topic was jarring: “Why I Think Jodo Shinshu Will Disappear.” Already, numbers tell the story, according to Rev. Mas Kodani, who spoke to our sangha.

About half of all Jodo Shinshu temples belonging to the Buddhist Churches of America (BCA) lack a full-time minister, and must “rent” or share one with another temple. Currently there are 60 temples on the mainland U.S., served by about 30 resident ministers.

Those numbers mean temples now mostly empty were once filled with thriving sangha communities served by their own minister. In Central California for example, Fresno temple’s two ministers oversee activities at five smaller temples in the region. Those temples once had lively sanghas and their own minister, even holding their own summer Obon dances. Through such activities, each sangha felt a strong sense of community and identity tied to their temple.

For example, to address this downward trend, several years ago BCA started a minister’s assistant program, which trains laypeople to help with temple duties. Subsequently many temples now have such assistants who sometimes serve as the primary functionary. They help alleviate the minister shortage, but don’t solve it.

One possible solution is for small temples to join together as one, combining members, resources and facilities. (ed. note: This kind of unification was successfully done in Canada, where six temples joined to create the Buddhist Temple of Southern Alberta. They pooled resources and built a large temple building in Lethbridge)

However, temple members tend to be resistant to change, Rev. Kodani said. People generally prefer familiarity, find comfort in their identity and routines, feel the established way is best, and consequently resist change. He said to move forward, people must get over being control freaks and accept impermanence, not just in life, but in Jodo Shinshu in America.

By ceding control, people may find a new source of fulfillment. Rev. Kodani gave an example of how a minister led a tour of temple members to Japan. One day the minister surprised them by saying they must go out and get lunch themselves. Forced from their comfort zone, they had to rely on the kindness of others to communicate and order meals. They later said they gained an unforgettable experience and felt gratitude for people who helped them.

That lesson would work well at temples here, Rev. Kodani said. People tend to get too comfortable with the routine of temple services, so altering them once in a while helps make people more present and alive.

A “living temple” is where members regularly interact with each other, bonding as a sangha, according to Rev. Kodani. Services, social activities and fundraisers all serve this function. Through these activities, people connect, communicate, talk and joke together, which he described as “bodhisattva play.”

Clearly understanding the difference between Christianity and Buddhism is key to our temples’ future, Rev. Kodani said. There’s a general perception that Jodo Shinshu and Christianity are similar, with concepts such as Amida Buddha and Pure Land equated to god and heaven. Consequently, Shinshu’s uniqueness has been lost, he said. Perhaps that’s why some temples have disappeared.

Of course, we live in the United States, with its strong Christian influence, so naturally we’ve learned Christian concepts and words, which have seeped into our thinking, he said. There also was the burden of Japanese Americans trying to assimilate into society after World War II.

Although temples were founded by Japanese immigrants and often taught Japanese culture, the focus must be more on Buddhism, he said. Still, certain elements of Japanese culture, such as the Japanese words said before and after meals—“itadakimasu” (I gratefully receive) and “gochisosama” (thank you for the meal)—are good to learn because they represent gratitude and appreciation taught in Buddhism.

Another key to survival is the traditional Buddhist service, such as Ohigan (Fall and Spring Equinox), Hanamatsuri (the Buddha’s birthday) and Hoonko (Shinran Shonin’s memorial). They help the sangha experience rituals and teach appreciation, steering us away from our ego-centered ways and selfishness. Programs for children, such as Senshin temple’s summer camp called Saishin Dojo, also help promote Buddhist teachings and activities.

Rev. Kodani told us the only absolute in Buddhism is impermanence—how everything is always changing—which makes me wonder about my temple’s future. At West Covina, we’re fortunate to have many activities, such as our services, social events and annual retreat (pictured), where we see our interdependence in action. Whether a chairperson or worker bee, each person is equally important in contributing towards our success. We’re also able to grow closer to each other. We needn’t agree to appreciate each other. Rather, dealing with differing views helps us learn, even if conflict make us uncomfortable. The sangha is the heart of Jodo Shinshu.

Change is inevitable, so who knows whether we’ll join with another temple or take some other form? We must be open to change despite our attachments. Meanwhile, we’ll meet weekly, stay interactive, ask sensei questions, participate in retreats, and have fundraisers. I hope we’ll continue to be a sangha and share the dharma, whatever the difficulties.

Joanie Martinez is a member of West Covina Buddhist Temple in California.