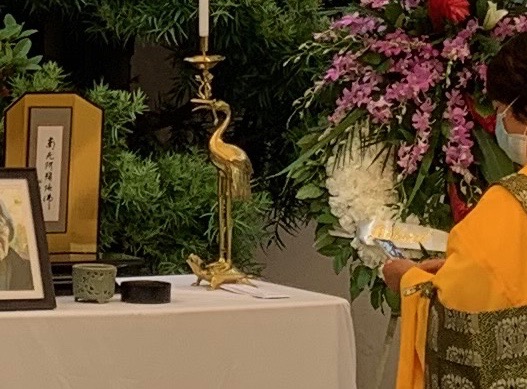 Many people feel religious rituals and ceremonies are silly and meaningless. After all, what’s the use of burning incense and chanting a bunch of words we don’t understand? But they’re important in helping to deepen our spirituality, especially in Jodo Shinshu Buddhism.

For example, Jodo Shinshu has many memorial services. When a person passes away, there’s a bedside service called makurakyo. Traditionally after a few days, there’s a funeral. After that, there’s a seven-day service, and then a 49-day service. There are different anniversary date services: 1-year, 3-year, 7-year, 13th year, 17th year, 25th year, 33rd year, and even, 50-year.

These services became common during the Edo period in Japan more than 200 years ago. During that time, rulers from the Tokugawa clan wanted to ensure stability and obedience to the state. They promoted Confucian values, which stressed harmony by observing the natural order of society, which means honoring ancestors, respecting one’s elders and grandparents, and children obeying their parents. Buddhist memorial services became an expression of these values, which was a case of cultural values shaping the Buddhism tradition.

In my experience, many Jodo Shinshu families here in the United States held funerals, 49-day services, and even, one-year services. After that, the number of people holding memorial services determined by traditional anniversary dates dropped drastically. Perhaps they’re busy, they forget or don’t think it’s important, which is unfortunate because I think memorials provide families with a strong spiritual foundation.

Often, it’s the only time when family members come to the temple, and done over time, they at least provide an opportunity to hear the Buddha dharma, the Buddhist teachings. In this way, we are encouraged to reflect on our karmic connection to one another and feel a sense of appreciation for our lives.

Ceremonies and rituals are the container keeping alive this spirit. The ceremony itself, in this case, the funeral or memorial service, calls people to come together and focus their thoughts on a special person from their past. The rituals—chanting, incense offering, bowing before the person’s picture, singing a gatha, and listening to a dharma talk, help us channel our feelings and emotions towards understanding life in a more spiritual way.

However, in our busy, modern world, people tend to think of rituals and ceremonies as meaningless or silly, because after all, what do rituals actually achieve? These activities don’t “do” anything for me, right?

In a sense, that’s true, when you compare them to our “real” world activities. In the “real” world, we work because we get paid (in other words, we probably wouldn’t work if we didn’t get paid). There must be a payout for our efforts, right? We exercise to lose weight or get into shape and look good, and eat food that tastes good or that’s good for our health. Otherwise, what’s the point?

But this is the narrow world of our own selfish perceptions. This is a world created by our desires, by our attachments, and by our thoughts about how we think the world should be.

The Buddhist teacher Rijin Yasuda said, ““Human beings do not exist in reality itself; rather they function within the context of their interpretation [of reality]. Humans are able to function in and be concerned about the human world alone; they cannot function in a world that transcends humans. We are like silkworms who make cocoons and who live within the cocoons we ourselves make.”

Like Rev. Yasuda said, I think most of the time, we live in this cocoon of a world, but when we face a crisis in our lives, especially when someone close to us passes away, or we ourselves face our own death, cracks appear in this cocoon, and suddenly this world we thought we knew—falls apart.

Yasuda said, “We think that we are experiencing reality, but not really. We do not live in a world of direct experience. Instead we have been living in a world of our own creation.”

The problem with human perception is that it’s rooted in dualistic thinking, meaning, most of the time, we only see one side, without seeing the other. For example, we either think of “life” or we think of “death.” When we see form, we think “life.” When that form disappears, we think “death.” That’s why we become sad or depressed. We see life that is limited and short. We don’t see life that is infinite and eternal.

Buddhist masters from the past say our thinking gets in the way. Our thinking—the way we see and experience the world—is heavily based on dualism, dividing up and choosing one thing over another, and not seeing life as connected and One. I think this is how rituals and ceremonies can help.

About two weeks ago, a woman, who several years ago stopped coming to the temple, suddenly contacted me, explaining that her husband, whom I had never met, was dying. She didn’t know what to do and wondered if I could visit him. Usually when people tell a minister that someone is sick, that means the situation is dire, so I immediately went to her house.

The woman greeted me and brought me into a bedroom, where her husband was lying in bed. The man was awake but fading in and out of consciousness. Other family members stood around the bed, looking distraught and sad. I sensed they felt helpless to do anything.

I was wearing a simple black robe over my regular clothes with a Buddhist sash around my neck. The sick man seemed to know I was a priest, and smiled faintly at me. I greeted him and told him I wanted to chant for him. He nodded weakly. I chanted Shoshinge in a slow methodical tone, taking longer than usual. The family members quietly listened. At the end of it, I rang a small bell, and slowly recited Nenbutsu, “Namu Amida Butsu.”

A short time later, the family sent me a message, thanking me profusely. They said the man seemed to be at peace, closing his eyes during the chanting, his breathing calming. They said that they—the adult children—were not Buddhist, nor did they know anything about Buddhism. But somehow, they felt a sense of relief, a quiet peace. Somehow, they said, the ceremony had helped.

Now I want to tell you another story. A woman from Japan who was married to an American asked me to perform a funeral service for her father. The ceremony was at her house, high in the Berkeley Hills, which had a beautiful view of the Bay and Golden Gate Bridge. I told her I would come an hour early to set up, but she told me to come just before the start time at 1 p.m. I arrived to find there was lunch party in progress, with people eating, drinking wine, and socializing. I quickly set up a small altar, and told the woman I was ready to start.

I began chanting and a few family members offered incense before the altar. I finished chanting, rang the bell and recited the Nenbutsu, “Namu Amida Butsu.” I was about to stand up and give a dharma talk, when the woman abruptly announced, “Okay, we’re finished with the service. Please everyone, get some food!”

I was shocked. But I knew that in Japan many people who are not religious feel they fulfill their obligation to the deceased just by holding a Buddhist service. To me, this service had no meaning.

In Buddhism, any service is an opportunity to hear the Buddha dharma, or Buddhist teachings. These teachings ask us to reflect on our lives and to deepen our understanding of who we are and what this life is all about. We are encouraged to follow this path through rituals and ceremonies, especially by listening to the dharma. In this way, our everyday thinking is challenged. Shifting our perspective and gaining a new way of seeing the world is key. When rituals and ceremonies are done without meaning, how we think and experience the world remains unchanged.

From our Buddhist tradition, we have received a precious gift in the form of rituals and ceremony, which help us transcend the world we don’t understand or appreciate. This is how we see that which is formless, and sense time that is eternal.