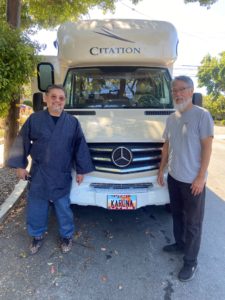 Travel across country in an RV and “spread the nembutsu,” pandemic be damned?

Was I crazy? Or maybe the crazy one was Rev. Jerry Hirano, who made the pitch. My answer: Sure!

Just what was this trip really about? Rev. Hirano recently acquired an RV to safely travel for work and pleasure. He and I first met as students 40 years ago at the Institute of Buddhist Studies in Berkeley and were ordained together in Kyoto. As Buddhist ministers, we thought we could hold a service in 48 states, invoking the words, “Namu Amida Butsu,” symbolically spreading Nembutsu (reciting the Buddha’s Name). We’d wish for peace and an end to the pandemic, and visit a bunch of Buddhist sites and Japanese American historical places. Plus, it’d be an adventure. Besides, we were tired of home confinement. We pledged to be safe and responsibly practice social distancing. The RV would certainly help, especially with license plates saying “karuna” (compassion).

On September 23, Rev. Hirano, minister of Salt Lake City Buddhist Temple, drove from Utah to California. First he stopped at Wakamatsu Farm, site of the first settlement of Japanese immigrants, the first child born as Japanese American, and the first Japanese grave on American soil. He performed a simple Buddhist service before the grave.

The next day, he picked me up and we went to the nearby Jodo Shinshu Center in Berkeley. Following strict pandemic protocols, including a temperature check and hand sanitizing, we paid our respects, as a disinfectant mist was sprayed wherever we walked.

At Berkeley Higashi Honganji temple, Rev. Ryoko Osa met us. We dutifully wore masks and bowed before the Amida Buddha statue. (Note: we sometimes dropped our masks for a quick picture.)

Crossing the Bay Bridge to San Francisco, we paid our respects at the Buddhist Churches of America headquarters, thanks to help from Rev. Michael Endo. It truly was an auspicious beginning.

After a long drive down Interstate 5, we visited Higashi Honganji Betsuin temple in Los Angeles and met with Bishop Noriaki Ito.

We stopped at Utah’s Bryce Canyon National Park, light colored rock pillars viewed by looking down on them from a cliff. On the way, we also stopped briefly on the road to gassho (put our hands together) and recite Nembutsu in Arizona.

We finally arrived in Salt Lake City, Utah, where Rev. Hirano had to officiate a funeral. We visited his temple, where he showed me the altar and gift shop run by members. 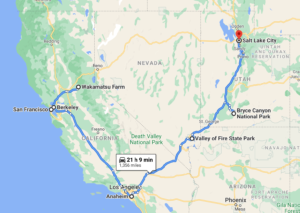