Highway billboards say much about a region. In Georgia, “The Peach State,” two giant signs declared “Only God and Donald Trump Can Save Our Country.” When entering Virginia, Joe Biden signs suddenly proliferated.

Our “Nembutsu Across America” road trip continued. Three weeks earlier, Rev. Jerry Hirano, from Salt Lake City, and I, departed California in an RV, aiming for all 48 drivable states. We’d visited Buddhist temples and Japanese American and Civil Rights historical sites, but now we quickly wanted to cover ground. Along the way, we hoped to learn more about our country and ourselves, the Buddhist teachings as our guide.

(If you missed it, read this story’s Part I and Part II)

Traveling in a pandemic presents special challenges. We didn’t eat in restaurants, chitchat with waitresses, meet locals or spend time in stores. We mostly kept to ourselves, which was easy in a mobile home. Our faces were covered when seeing others; their faces also covered, but not always. Some regions seemed business-as-usual. Restaurants and stores with parking lots full of cars and groups of mask-less people. Still much can be learned about people and places.

From Orlando, Florida (where this story’s Part II ended), we reached Myrtle Beach, South Carolina. The next morning, sunrise greeted us over the Atlantic Ocean. 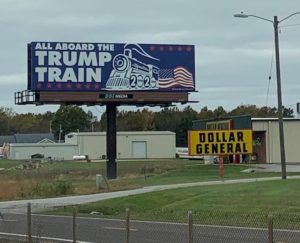 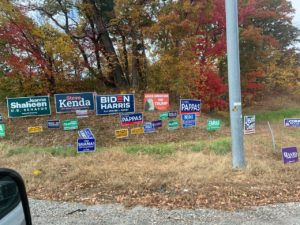 We crossed the Potomac River to Harper’s Ferry in West Virginia, where abolitionist John Brown tried to initiate a slave revolt, prelude to the Civil War in 1859. We couldn’t stop because it was crowded with tourists and had no parking. The picturesque town sits below majestic cliffs at the intersection of West Virginia, Virginia and Maryland, where the Potomac and Shenandoah Rivers meet.

We headed west through Maryland to Delaware, surprised by its vast farmlands.

Now came a quick succession of states—New Jersey, New York, and Connecticut, where we planned to stay, but were refused by an RV Park, unless we showed proof of a negative Covid-19 test. We were forced to continue driving to Rhode Island, where suddenly we felt the chill of New England’s autumn.

In Salem, Massachusetts, a memorial marked the infamous witch trials of 1692-93, when women and men were accused of practicing witchcraft and were executed, many of them tortured and hanged. This was our country’s early history of mass hysteria caused by isolationism and religious extremism, serving as a lesson for current times. Today, Salem is for tourists, with costumed revelers ready for Halloween. 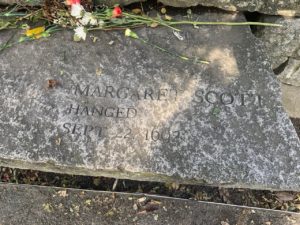 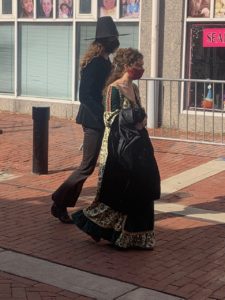 We continued up the coast, through New Hampshire, and by noon, to Maine.

The afternoon drive was back through New Hampshire to Vermont, when it started raining.

Finally we headed west through New York. We stopped at Niagara Falls at the Canadian border. (Impressive!)

Next were Pennsylvania and Ohio (Fall colors!)

We touched the bottom tip of Michigan (again more farmland).

Heading down to Kentucky, we stopped at Louisville’s Muhammad Ali Center, a multicultural center, and thought of Breonna Taylor, killed in a police raid gone wrong.

Driving through America’s Heartland shows the importance of religion in this country. The most noticeable buildings tend to be churches. Even town names sound biblical.

To streamline our trip, we relied on geographic tricks to claim certain states – e.g. hitting a patch of Texas between New Mexico and Oklahoma; touching a corner of Pennsylvania between New York and Ohio; slicing through the bottom tips of Indiana and Illinois, driving between Kentucky and Missouri.

My favorite road trick was Kansas City, where we hit two states–one side of which sits Missouri’s Kansas city, and the other side (across a river) sits Kansas’s Kansas City.

From an Iowa highway, we caught glimpse of a horse and buggy, probably Amish, Christians known for a simple lifestyle and lack of modern technology. (Didn’t get a picture).

In Iowa, the weather turned frigid. Snow began to fall, continuing into Minnesota. In Minneapolis, we visited what’s now called “George Floyd Square” (the name popped up on Google Maps and Instagram). Here, I felt a deep sense of current history and ground zero for current protests and national sentiment. It was a freezing Sunday, a few snowflakes falling, yet a crowd of people gathered near a makeshift memorial, listening to speakers. (Floyd’s killing by police, captured on video, sparked protests worldwide.)

Heading east a few miles, we crossed into Wisconsin and quickly turned around. We planned for an RV Park in Minnesota, but again were refused, learning they were closed because of the pandemic, so we stayed in a hotel.

The temperature plunged in North Dakota. Through Fargo, south to Sioux Falls,  South Dakota, then west towards Rapid City, we drove hundreds of miles through desolate, snow covered plains.

We parked in five inches of snow for the night in Presho, South Dakota. The next morning, the temperature was seven degrees. Although we stayed warm at night, the RV water froze. Whenever we stopped, the cold wind stung through our clothes. 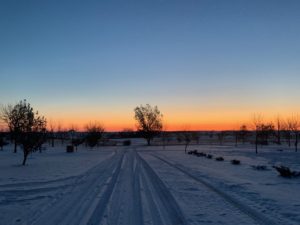 By happenstance, we pulled off to a roadside rest stop and discovered this 50-foot statue overlooking the Missouri river, near Chamberlain, South Dakota, created as a tribute to the Lakota and Dakota people. It’s called “Dignity.” 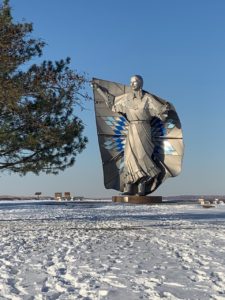 We visited Mount Rushmore and the Crazy Horse Memorial, a tribute to an iconic Native American tribal leader in the 19th century. (Crossed them off the bucket list)

With the end in sight, fatigue and homesickness descended on us. We began to pack more miles into each day, driving eight, ten, and twelve hours (Actually Rev. Hirano did ALL of the driving). We became road trip zombies.

The last day was a monster – Spokane, Washington, through Oregon, to the Bay Area in California– 14 hours and 840 miles. I was glad to get home. (Rev. Hirano still had to drive back to Salt Lake City, Utah – check out his Facebook Page). I was happy to return to my home state (great weather!)

We did it, covering 48 states in 36 days and more than 13,000 miles. Even more amazing, Jerry and I got along the entire time with no mishaps. With who else could we do such a trip? (Not my wife, who shudders at the thought)

Before the trip, friends worried we’d encounter racism and discrimination, especially in the South. On the contrary, people were friendly and nice. We saw different responses to the Pandemic, from strict protocols to business-as-usual. Almost everywhere, we felt the importance of religion, primarily Christianity. In this election year, signs of division were strong and loud.

Buddhism teaches we’re all connected and tied together. Throughout the country, people try to live the best they can, work, make a living and live in peace. We have more in common than differences.

These roads traveled, especially the Interstates – those big multi-lane fast highways – and the endless days I spent staring at them, became a metaphor. They are the karmic bonds tying us altogether. The diversity of the land, weather, and people are what makes our country special.

The Buddha diagnosed the problem long ago. We live in a world of interdependence, but our ignorance blinds us. Truly our lives are tied to our country, community, and each other. Looking back at the trip, I’m amazed at this country’s natural beauty, various communities, but also its painful history. My hope is that we’ll finally come together and realize the great Oneness of our lives.

Generally, we followed this route:

This Map Shows the Quickest (and Ultimate) Road Trip Across America