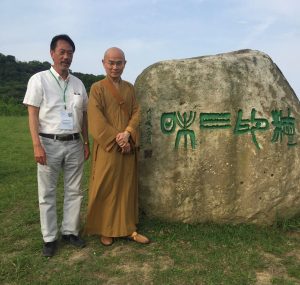 “Jodo Shinshu is for slackers,” I suddenly thought. Surrounding me were monks, nuns and some very devout laypeople. Unlike me, they looked like real “Buddhists.”

The idea surprised me. Before arriving in Taiwan, I was skeptical, having heard about money grubbing temples, rich donor favoritism, and superstitious practices antithetical to the Buddha dharma. Already the first day, I felt Buddhism’s deep influence here on the island.

I was attending an International Association of Shin Buddhist Scholars meeting last Spring. As soon as I arrived at Taipei’s main station, I walked across a busy boulevard and immediately a middle-age woman at the corner greeted me by loudly chanting, “Amituofo, Amituofo, Amituofo…” which is Chinese for “Namu Amida Butsu.”  Her piercing voice was harsh, almost as if scolding me. In the United States, I thought, I’d be hearing, “Jesus died for your sins!”

The next morning in my hotel room, I switched on the television. A monk was giving a sermon. On another channel, another monk was speaking. Back home, again I thought, they’d be Christian preachers.

Dharma Drum Institute of Liberal Studies hosted the meeting, about an hour north of Taipei by taxi. Located on Dharma Drum mountain, the university is a sprawling modern campus surrounded by trees and has an ocean view. The warm sun and fresh air added to its tranquility. 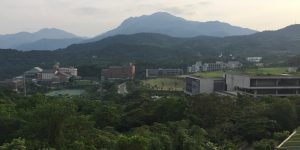 Many of the students were young monks and nuns, who have taken monastic vows. They have shaved heads, even the women, and always wear robes. Buddhist laypeople also attend, as well as ordinary students, although on this weekend, not many were visible.

Prior to coming, registration materials informed us no smoking, meat or alcohol are allowed on the mountain, and all meals would be vegetarian.

A Jodo Shinshu colleague called me about the trip and said, “Hey, let’s stay at a hot springs hotel. There’s one near the college.”

“No meat or alcohol are allowed,” he blurted out, amazed thick-headed me couldn’t see the obvious. 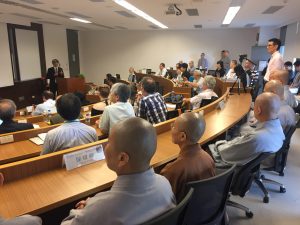 The meeting’s theme was meditation and Pure Land Buddhism, which these days is a hot topic. Generally, Jodo Shinshu teachings generally dismisses traditional meditation, instead emphasizing Nembutsu, reciting the Buddha’s Name, as sole practice. Shinshu’s founder Shinran Shonin described meditation as “self-power,” whereas he taught total reliance on Amida Buddha’s “other-power.” He referred to other paths as “sundry practices,” calling them shallow.

As for me, I simply accept and entrust myself to what my revered teacher told me, ‘Just say the nembutsu and be saved by Amida’; nothing else is involved.

If you wish to enter the Pure Land Path, you should, of the two practices, right and sundry, abandon all sundry practices and choose to rely on the right practices.

Monks and nuns at Dharma Drum practice seated meditation, observe precepts and adhere to a vegetarian diet. Even laypeople I met abstain from eating meat, meditated and chanted daily. They invited anyone staying on campus to participate in morning and evening services, held in a modern-looking temple with hardwood floors and three white sitting Buddha statues.

Somehow, I never attended any of services. They were so, uh, early in the morning.

In the school’s cafeteria, we each took a simple metal bowl and reusable chopsticks and served ourselves. A large assortment of tofu, mushrooms, vegetables, rice, nuts, fruits and other vegan ingredients lightly seasoned were available buffet-style on large trays. For beverage, a light soup or water may be scooped into the bowl after eating. Chinese Buddhist cuisine avoids using garlic and onions. 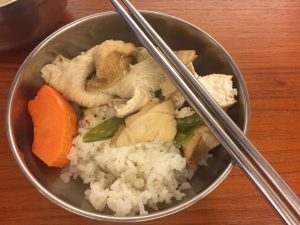 At first the food seemed bland, but I quickly became accustomed to the taste and enjoyed it. After three days eating this way, my body felt lighter, my head clearer and my stomach—which often gives me problems—was happily at peace.

The school’s lecturers gave well-informed talks espousing Buddhist teachings. Students, monks and nuns were pleasant and friendly. Lay volunteers constantly helped us, cheerfully showing us different places, and driving us around. Everyone seemed so kind and genuine. I felt they all were sincerely following the Buddha’s teachings.

In Jodo Shinshu, we say “come as you,” meaning accept ourselves—warts and all—on the Buddha’s path. Too many people take this to mean we needn’t do anything to follow this path, let alone meditate or become vegans. Many people barely attend service and how many of us say Nembutsu, “Namu Amida Butsu,” outside the temple? Do we honestly reflect on our actions and innermost thoughts, or quickly blame others for our troubles? Do we spend more time on social media than reading books about Buddhism? (Uh-oh, maybe guilty here). At any rate, trying to be “good” Buddhists is easily dismissed as “self-power” and “sundry”  practice.” 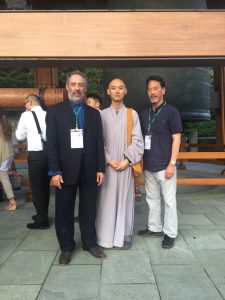 In Taiwan, I saw many Buddhists making a concerted effort to follow traditional practices. Why say they’re wrong and we’re right? Sometimes I think Jodo Shinshu people are too self-righteous. Compared to these people in Taiwan—who were sincerely trying to follow the Buddha’s teachings—I felt like a slacker.

At the meeting, scholars debated that perhaps so-called self-power Buddhist practices force us to realize our limits and help us understand truth of other-power. Already some Jodo Shinshu temples in the United States offer meditation, partly to attract new people and partly as religious practice. The idea remains controversial.

Whatever, I still feel like a slacker. Now I’m thinking, “let’s walk the Nembutsu path together,” but perhaps, we should all “try a little harder.”

Rev. Ken Yamada is editor of Shinshu Center of America