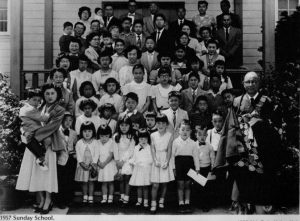 Despite Buddhism’s rise in today’s popular culture, why is membership declining at many of our temples? What’s the answer and what can we do about this vexing problem?

As a Jodo Shinshu minister in Northern California, I’ve struggled with the problem of attracting new members and increasing participation in temple activities and services. I’ve also seen people disappear. For example, a husband and wife from the neighborhood began attending Sunday services weekly, rarely missing any. But after a year, they abruptly left, announcing they next would check out a Unitarian church.

I documented many of my observations in a research paper, “Jodo Shinshu in California: Observations, Trends and Challenges,” presented at the International Association of Shin Buddhist Studies Biennial meeting at Dharma Drum Institute of Liberal Arts in Taiwan last May. You can read the full paper here.

It’s no secret Jodo Shinshu temple membership in the United States has been declining for years, and participation in temple activities and volunteerism are waning. Decades earlier, especially during years before and after World War II, families, grandparents, adults, young people and children, crowded into temples for services and social activities, evidence of which may easily be found in photographs from that era.

Even as a child during the 1960s, I remember attending Sunday services full of people, typically including entire families. Other temple activities, such as special services, picnics, luncheons, and bazaars attracted crowds. Free time after dharma school filled a yard full of kids, resembling recess at public schools. By contrast, typical Sunday services today attract just a smattering of attendees and not many children.

At the IASBS meeting, Ken Tanaka, professor emeritus of Musashino University in Tokyo, pointed out declining membership is not exclusive to Jodo Shinshu, but rather an overall trend in religious life in the United States, most notably Christianity.

According to a Gallup survey published in April this year, the percentage of people claiming church membership dropped almost 20 percent in the past two decades since 1999. About 52 percent of respondents reported they were members of a church, down from 69 percent in 1999.

Moreover, the number of people identifying as having “no religion” rose to 19 percent from 8 percent. This rise was most pronounced among the young millennial generation (born between 1980 and 2000). A third of millennials responded they had no religion.

Another survey last year found just 43% of Americans viewed religion as a core component of their identity. For Millennials and even GenXers, the most common religion was no religion at all, according to American Family Survey, an annual national survey conducted by the Deseret News and the Center for the Study of Elections and Democracy at Brigham Young University. The Nones claimed 44% of the 18–29 age group, and 43% among ages 30–44.

In many ways, this trend already was emerging 20 years ago when Wade Clark Roof documented a changing landscape of religion in his book, “Spiritual Marketplace.” According to Roof, people’s views were expanding beyond traditional religion and practices to include interest in angels, Sufism, journey, recovery, meditation, magic, inspiration, Judaica, astrology, gurus, Bible, prophesy, evangelicalism, Buddhism, esoterica and other things, creating a “spiritual marketplace” for a new generation of seekers.

I can’t help but feel in our materially abundant society, people focus more on the pursuit of wealth, status, love, and possessions, than spirituality. For me, “spirituality” means seeking life’s greater meaning beyond our everyday work, society, family, interpersonal and personal needs.

Just recently, my friend’s wife commented she was “spiritual but not religious.” This description implies a certain freedom to pursue spiritual matters without the burden of belonging to an institution, which is what religion has come to mean. It also implies people are free to choose whatever philosophies, practices and lifestyle they like or feel conforms to their worldview. In our society where freedom and independent thinking are highly prized, this course is attractive indeed. I sometimes feel visitors to the temple resemble “shoppers” perusing local houses of worship to find a good fit.

However, I think this approach has many pitfalls, foremost of which is seeking a way that merely reinforces what we already think, serving to justify our existing thoughts and actions, which tends to inflate our egos, make us more selfish and willing to attack others.

From the Buddhist perspective, the way we already think is the Number One problem. The Buddhist teachings urge us to be more introspective, make us question our perceptions, force us to examine ourselves and our motivations,  make us question the meaning of our life and to seek answers. The Buddha dharma forces us to confront our dark side and see that our selfishness and desires are the root of our suffering.

Our temples have much to offer the many people seeking spirituality. The Buddha’s teachings and words of Shinran Shonin are precious treasures that can help people find their way in life. How to connect with others and share the Dharma remain great challenges. Let us try and find a way.

–Rev. Yamada is editor of Shinshu Center of America

2 Replies to “Why is membership dropping at temples?”