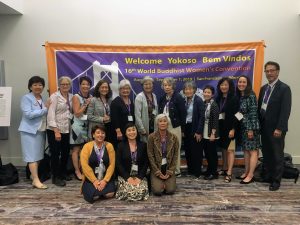 An international conference for women and Jodo Shinshu attracted a huge crowd of attendees from various countries.

The 16th World Buddhist Women’s Convention was held in San Francisco from August 30 to September 1. About 1,700 people participated, coming from across the United States mainland, Hawaii, Japan, and Brazil.

The event was held at the Marriot Hotel and was sponsored by World Federation of Jodo Shinshu Hongwanji-ha Buddhist Women’s Associations and the Buddhist Churches of America. Although a Nishi Honganji event, several Higashi Honganji members also attended, giving them a rare opportunity to interact with women from many other temples, while sharing the Jodo Shinshu teachings.

The theme of the conference was “Live the Nembutsu.” (nembutsu refers to reciting the Buddha’s name). Keynote speakers were Keiko Toro, an independent scholar from Aichi Prefecture in Japan, who spoke about Shandao’s parable of “Two Rivers and the White Path,” and Rev. Yukiko Motoyoshi, minister of Buddhist Church of Stockton, who spoke about her personal journey of self-discovery through Buddhism. 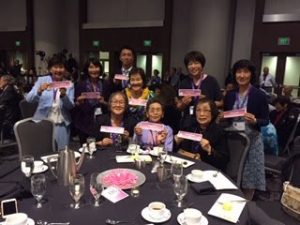 The conference concluded with a closing service on Sunday morning. Afterwards, many attendees walked a short distance to the Yerba Buena Gardens near the Moscone convention center to participate in a public display of Obon dancing, a traditional dance performed to commemorate the Buddhist “Obon” summer memorial observance.