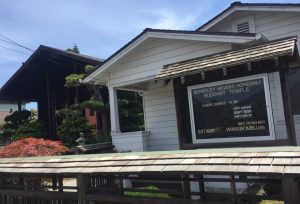 I first noticed what the Muslim prayer hall and our Buddhist temple had in common: no sign.

When I started as minister of Berkeley Higashi Honganji temple 14 years ago, my priority was to install a sign.  For some reason, none existed. Once when leaving the temple, a passerby asked if I lived there. I replied, “No, this is a Buddhist temple.” She said, “I thought this was a rich person’s house.”

A few years ago, I noticed a small building a short distance away from the temple, surrounded by sturdy metal fencing and a heavy iron gate. I thought it was an electric utility substation. One day, I saw several taxicabs parked nearby and drivers of Middle Eastern descent entering the building.  I immediately realized it was an Islamic prayer hall. But there was no sign. 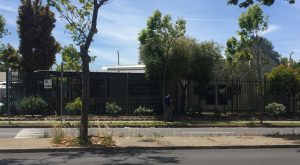 In his recently published book “American Sutra,” Duncan Ryuken Williams documents how at the outset of World War II, Buddhist temples, Buddhist ministers and temple members were viewed with suspicion. Temple buildings were shot at, burned and vandalized, ministers and priests arrested and temple members harassed. Even before the war in the 1920s and 1930s, government reports concluded Japanese American Buddhists were potentially disloyal and should be considered suspicious.

With the outbreak of war, entire Japanese American communities were forcibly rounded up and moved to internment camps far inland, their civil rights suspended. Even after being boarded and closed, many Buddhist temples were attacked and vandalized. Fortunately our temple was spared, perhaps because at the time, the building looked more like an old-fashioned schoolhouse, lacking the Japanese garden and temple-like facade, which were added years later. Also perhaps because there was no sign.

Given our shared history, I wanted to invite someone from the Islam prayer center to speak at our temple, but I had no way to contact anyone. By chance, I received a letter from the Islamic Speakers Bureau, offering public speakers. I promptly called and they introduced me to Mr. Rami Elkinawy, a volunteer at the Muslim Community Association in Santa Clara. I told him about our temple’s legacy of World War II and he agreed to visit.

In May 2017, Rami spoke at our Sunday service. I believe it was the first time we had a speaker from another religion and certainly the first Muslim. He talked about how members of his association feared vandalism and attacks, how many of them faced harassment and discrimination, and how his religion was misperceived as anti-American and demonized. “Islam is a religion of peace,” he said.

He said he understood our temple’s history of facing similar threats and challenges. With tears in his eyes, he thanked us for inviting him to the temple, welcoming him with warmth and understanding, and for listening to what he had to say. Many of us who attended service that day, listened also with tears in our eyes.

Today, we are witnessing a repeat of a dark period in our country’s history as people are attacked and persecuted because of their religion, and also because they are immigrants, branded as somehow un-American. Knowing our past and the karmic causes and conditions making us who we are today, we feel the pain and suffering of others facing the same struggles. May this wisdom inspire us to actively support those in need and to work towards creating a more compassionate and understanding world.

-Rev. Ken Yamada, editor, Shinshu Center of America. He served as resident minister of the Berkeley temple from 2005 to 2017.