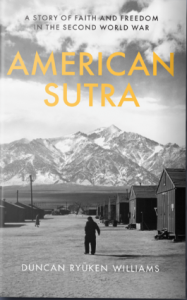 A religion labeled anti-American, its leaders arrested, buildings shot at and burned, followers viewed with suspicion. The target? Not Islam, but Buddhism.

Those events followed the bombing of Pearl Harbor, an eerie foreshadowing of current headlines and problems faced today by Muslims in America. This dark history is captured in exhaustive detail in Duncan Ryuken Williams book, “American Sutra.”

It’s an image hard to fathom, especially now since Buddhism is seen as a peaceful religion, popular among new spiritual seekers, and certainly antithetical to warmongering. Bias and prejudice against Buddhism were decades in the making before the outbreak of World War II, along with anti-Japanese sentiment, ultimately leading to mass incarceration of more than 110,000 Japanese Americans in internment camps far away from the Pacific coast.

Beginning with Pearl Harbor in December 1941, nearly two hundred Buddhist priests were rounded up in Hawaii and the U.S. mainland. In Hawaii, temples were shot at, white soldiers vandalized Buddhist statues and arsonists burned buildings. In California, temples in various parts of the state were shot at and vandalized. A temple in the central valley was ordered to remove it’s big outside bell for fear it would signal the Japanese Navy, despite being miles from the coast. In Seattle, Washington, dozens of Youth Buddhist Association members spent a night in jail for wearing pins showing the ancient Buddhist “manji” symbol, which police mistakenly identified as Nazi swastikas.

FBI raided a house near Sheldon Texas, smashing a home Buddhist altar and arresting an elderly grandfather, not releasing him until three months later, while presenting no evidence of anti-American activity. In Kauai, Hawaii, the Military Governor’s office coordinated the closure of the island’s Japanese-language schools, and along with them, Buddhist temples. Eventually, 13 of the island’s 19 Buddhist temples closed.

Meanwhile, authorities treated Japanese American Christian ministers much more leniently, arresting far fewer and detaining them for shorter periods, according to Williams. Their religious services inside internment camps typically were encouraged as “Americanization” activities. By contrast many Buddhist activities faced harsher restrictions or were repressed, and were often viewed as encouraging pro-Japan nationalism.

According to Williams, years prior to Pearl Harbor, the U.S. Army’s G-2 intelligence section, the Office of Naval Intelligence, and the FBI commissioned investigations of Buddhism as a potential threat to national security.

During the 1920s and 1930s, the Military Intelligence Department and the Army G-2 intelligence section issued a half dozen reports stressing how Buddhist temples and Shinto shrines in Hawaii “retarded” Americanization and should be considered “military liabilities” in the event of war with Japan.

A 1933 Military Intelligence report stated, “Buddhism serves as an indirect agency in keeping the spirit of Mikadoism alive in Hawaii and as one of the best mediums of pro-Japanese propaganda…we doubt whether the American citizens of alien-Japanese parentage can be truly loyal to America. It would be like asking a tadpole to change himself to a frog within an hour of his birth.”

Reports written by a few officials closely familiar with the Japanese American community refuted these fears. For example, a confidential intelligence report in 1939 concluded, “the majority of the citizen group stated they would adhere to the United States and encourage their children.” These reports were ignored.

Williams goes on to document the efforts of ministers and laypeople to keep alive Buddhist traditions and rituals in the camps, and the importance Buddhism played in their lives. He also shows how the religion evolved and changed amid pressures of war and internment. For example, Nishi Honganji denomination’s Buddhist Mission of North America changed its name to “Buddhist Churches of America,” transferring leadership to second-generation Japanese-Americans and adopting English as its official language.

American Sutra picks up its story midway through Japanese Buddhism’s history in the United States. For a fuller picture of its earlier development, particularly Jodo Shinshu, check out Michihiro Ama’s Immigrants to the Pure Land: The Modernization, Acculturation, and Globalization of Shin Buddhism, 1898-1941.

Williams is a professor of religion and East Asian languages at the University of Southern California and director of the USC Shinso Ito Center for Japanese Religions and Culture. Previously, he held the Shinjo Ito Distinguished Chair of Japanese Buddhism at University of California, Berkeley, and served as director of Berkeley’s Center for Japanese Studies. He also is an ordained Soto Zen Buddhist priest.

The tales told in American Sutra add new depth to the history of discrimination against Japanese Americans, war hysteria, and religious freedom, and provide important lessons for the great challenges we still face in today’s world.

(American Sutra: A Story of Faith and Freedom in the Second World War by Duncan Ryuken Williams, Harvard University Press, 2019)