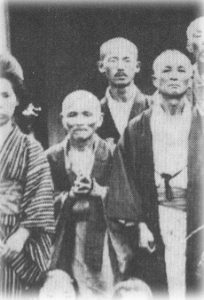 Mention the name “Saichi Asahara” and people will say, “Who?” Of course, most people never heard of him.

Saichi was born in a small fishing village in Shimane, the only prefecture of Japan’s 43 prefectures without a railway system until a few years ago. Even now, he’s nothing more than an old man living in dire poverty, eking a living by making geta (wooden clogs). There’s a reason why I’m introducing this somewhat uncouth old man from rural Japan to readers of this precious journal.

Who’d suspect Saichi stands at the forefront of seekers following the spiritual path laid by Shinran Shonin? Who’d think he’s the embodiment of Jodo Shinshu? What I’m saying may be coming from my own bias. Nevertheless, I feel fortunate to have met him. To me, he represents the essence of Buddhist love and happiness. Below, I’ve gathered a unique collection of his poems written in his local Shimane dialect. Through them, Saichi speaks kuchi-ai, unfiltered. We should savor his words. I’m in no position to analyze his religious beliefs. My only intention is presenting these poems in his own words.

Let me explain a little about the life he lives now.

This year (1919) Saichi I think is 70 years old. His preordained occupation seems to have been geta maker. You may think each morning, he walks to a local temple, attends morning service, and returns home to work. He doesn’t. Actually, he secludes himself in a two-tatami workroom and untiringly applies himself. You may think he’s the kind of person who works—not out of duty or for money—but to repay the Buddha’s kindness to him. He’s not. He can’t imagine paying back gratitude. Rather, he has no choice but to work filled with joy and happiness. A poem he wrote says:

Saichi, his last moments over and done with,

his funeral over and done,

now lives with Namu Amidabutsu in this world

Here, he’s the personification of ki-ho ittai, oneness of seeker and dharma. The Buddha’s power integrates us into Totality of universal self, transforming his workshop into rhythms of wood shavings from geta, layer after layer. Amid the activity, he recites Nenbutsu, and work becomes Nyorai’s doing.

He dwells in the Buddha world of love and happiness. Whenever his mind empties of thought, a poem arises and he scribbles words on wood shavings. The kuchi-ai poems accumulate by day’s end. Before dinner he places the shavings before a home altar, and copies the words in hiragana on a blank notebook. Rewriting deepens his understanding and feelings. These poems now total some twenty notebooks. Poems below come from these journals.

From September 1913, he began expressing this way his Buddhist experience of love and happiness. Probably about this time he became a person of faith. We cannot forget an extraordinary effort made him a person of faith, a process set forth long before. It’s said Shinran Shonin grasped truth of Other Power the moment he saw Honen Shonin’s warm smiling face. Nonetheless, Shinran Shonin first endured years of strict religious practices on Mount Hiei. Great effort brought him to a noble threshold of faith. Saichi Asahara also endured much, reaching a similar place.

At age eighteen or nineteen, Saichi became increasingly concerned about his future and sincerely began seeking Truth. After a meandering forty-year journey, he reached an impasse in search of life’s meaning. He was 64 years old. At times desperate, he nearly abandoned everything, even religion. His efforts seemed futile, like piling up pebbles only for them to be knocked down and scattered. How he felt hitting rock bottom is unimaginable.

Such people can only appear before Nyorai of thusness, sonomama, “just as they are.” That’s why the Buddha—understanding such difficulties—gave us Amida Buddha’s exalted teachings.

“If the way which I have pointed out as leading to this result seems exceedingly hard, it may nevertheless be discovered. Needs must it be hard, since it is so seldom found. How would it be possible, if salvation were ready to our hand, and could without great labour be found, that it should be by almost all men neglected? But all things excellent are as difficult as they are rare.”

In this way I feel Amida’s light shined on Saichi Asahara, enveloping him in Totality. Now local people respect this living myokonin. Rare is the person who instills religious awareness in others. He grasps Truth while composing poems seemingly without effort. These poems express his feelings “in his own words” (Japanese: kuchi-ai).

As last year ended, influenza spread in city and country alike. Saichi probably then composed this next poem.

When catching a cold, cough comes out.

Saichi caught a cold of Seeker and Dharma,

and cough of Nenbutsu comes out again and again.

When awakening to Namu Amidabutsu,

however often Namu and Amida, or Seeker and Dharma meet,

Why that’s impossible, you take the cake,

As for “Ain’t that something,”

Ain’t that something isn’t about Saichi.

Ain’t that something is Oyasama.

Your heart, my heart, perfectly fits heart to heart,

making a Child who saves me.

Your kindness is more than I deserve, filling my heart with joy.

My dear, without asking me first, camped in my heart,

taking this person, this person filled with deluded thoughts and attachments, epitomizing hardheartedness,

you kindly made me Jewel of salvation of living beings,

If Compassion didn’t find me,

I’d be falling, falling through darkness,

that moment Namuamidabu shined light on me

and blew me away.

you served a feast, feast of Namu Amidabutsu,

through this meal you raised me.

You ensured me safe passage home

from the floating world.

Your kindness is more than I deserve,

filling my heart with joy.

Hey, Saichi, you are so miserable.

but I see sparkles,

that’s what I am, miserable.

still seeing sparkles of Compassion, are ya?

I’m seeing ’em from inside Compassion.

I told that Child not to go out, popping out again!

With nowhere to go, popping from my mouth.

Going out again, popping out saying,

This old Self of mine has delusions piled up,

Aah, what a great feeling!

Hey listen, there’s something to tell you,

When sitting at the foot of a high seat listening to a sermon,

in my breast, joy rises up.

This Namuamidabu is something else!

That’s something else, don’t you think?

Arigatai te ya no

this old heart of mine in Namuamidabu asks what I’m asking.

Those who understand are few.

On this Ho-onko, our birthday was celebrated!

On this Ho-onko, our ages became one!

If we become two, my turn to become Mida.

Oh wow, this taste is something else!

Your kindness is more than I deserve, filling my heart with joy.

happy happy I am, Namu Amidabutsu.

How happy I am, Namu Amidabutsu.

It’s something else, Namu Amidabutsu.

It’s something else, Namu Amidabutsu.

This old Self of mine, no good, no good.

If feeling “This is really something else” were real,

if feeling “I’m so happy” were real, I wouldn’t feel this way.

even if “I feel happy” is only faking,

even if feeling “Oh this is something else” is only faking,

this old Heart of mine is only faking.

Anything and everything is faking. Just one lie atop another,

no matter how many, still lies atop lies.

The more there are, the more faking. No juice flows because it’s faking.

Asamashii no mo was ga janai

Asamashii no mo, hito no mono

Tho’ burdened by guilt,

my guilt’s tears of sorrow in the Six Letters.

Tho’ burdened by sin, my guilt’s tears of joy in the Six Letters.

Namu’s the misery, Amida’s the joy.

It’s Namu Amidabutsu of tears of sorrow and tears of joy.

O Saichi, what to do when you can’t be happy?

the heart born from Oyasama’s heart,

Oya’s experienced in these things, somehow it works.

Editors note: Myokonin are people who are unworldly, lack formal education, and pious, but whose spirituality comes directly from the heart. The great Buddhist scholar D. T. Suzuki first introduced them to the West through his writings.

Among them, Saichi Asahara (1850–1932) is particularly notable for thousands of poems he wrote expressing his Jodo Shinshu faith. A woodworker by trade in Japan, he used simple kana writing on wood shavings and scraps, later copying them to grade school notebooks.

Edatsu Teramoto (1898–1953) first met Saichi at his uncle Kenkyo Umeda’s temple Anrakuji in Shimane prefecture, Japan. He wrote about Saichi in the Japanese magazine Honi (issue November/December 1919), which published some of Saichi’s poems for the first time.

Teramoto later met D. T. Suzuki in Hawaii in 1949 and also in Los Angeles the following year, helping him to interpret the difficult to understand parts of Saichi’s poems.

The poems appearing here were first published in the Japanese magazine Honi, November 1919. The introduction and verses were translated freely into English by Wayne Yokoyama, February 2019. A Romanized version of Saichi’s original writings in Japanese is included.

Rev. Yokoyama is a translator of Buddhist works living in Kyoto, Japan, and former editor of Higashi Honganji’s The Eastern Buddhist academic journal. The translations in this article are entirely his own.