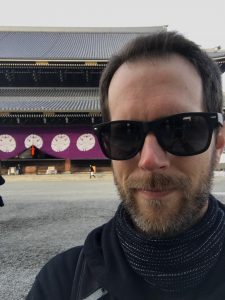 Karma sent me to Japan. At least that’s how I felt after visiting Higashi Honganji’s main temple in Kyoto. And karma allowed me to encounter Shinran Shonin and Jodo Shinshu.

I often thought my life was random. I’m a schoolteacher but my interests and curiosity lead me in different directions. I protested against injustice where I live in Berkeley, California, organized summer camps for Roma children in Albania, supported dog rescues and worked for animal rights.

For the past few years, I’ve been going to Berkeley Higashi Honganji temple, where I first learned about Jodo Shinshu Buddhism. When I heard about a retreat for laypeople at Higashi’s mother temple (“Honzan”), I jumped at it. Last November, a small group of us representing different temples in Higashi’s North America District traveled to Kyoto, visiting various historical sites connected to Jodo Shinshu and staying at the main temple for a three-day retreat.

Our lecturer was Professor Michael Conway of Higashi Honganji’s Otani University. He spoke about various aspects of the teachings, including karma—the innumerable causes and conditions shaping our life.

It made me think: If Germany hadn’t beaten Argentina in the 2014 World Cup, I wouldn’t have drank beer, then afterwards, stumbled into a pet store. I wouldn’t have brought home a puppy I’d take on walks around my neighborhood in South Berkeley. I’d walk with that crazy puppy for an hour every day. One day, we walked on Oregon Street, right in front of the Berkeley temple. Fortunately it was open; I went inside and have been going ever since. I found a Sangha.

Just a few years later, incredibly I found myself outside of Founder’s Hall at Honzan, wrestling with the proper pronunciation of my new Buddhist name. But there I was, doing just that.

While growing up in the 1980s, Japan to me meant video games, eight-bit adventures and seeing the names of the games’ creators flash on the screen. But I’d soon trade those games for grunge and alternative music, followed by punk, which oddly, sparked my interest in Buddhism. Random, right?

Or was it karma? Karma and all its causes and condition seem chaotic. At least now, that’s how I feel. This feeling may frighten some people, especially if they’re raised believing some ultimate plan rules their life, that some supreme being steers this vessel called life through rough waters.

When I accepted this wasn’t the case, I expected to enter a new era of Nihilism. But I didn’t. Instead it’s an era of Nenbutsu. At Honzan, I came to realize it means liberation.

When Shinran Shonin descended from Mt. Hiei as a failed monk, he ended up spending almost a hundred days at Rokkakudo Temple, which now is hugged tightly between modern office buildings in downtown Kyoto. That’s when he began to learn from common people and their struggles in everyday life.

Shinran must have thought these people clearly had little chance to attain spiritual enlightenment. Clearly they lacked dedication, discipline, resources and time to sit for hours in meditation, shave their heads, take monastic vows and live peacefully on a mountain. How unfortunate and sad they’ll never understand ultimate truth. What Bombus!

Wait a second! I’m one of them. I’m a Bombu, a foolish and ignorant person.

So here come my nihilistic questions and feelings. I’ll save you the trouble of hearing more about this flood of brain chatter. Now, I feel profound respect and bow before the awakened One of Immeasurable Light and Life—Amida Buddha. Maybe if I repeat Namu Amida Butsu a hundred times I’ll feel as good as I did in Kyoto. If I do, I might be closer to Amida Buddha, my innermost aspiration.

Okay, I know it doesn’t work that way. From what I’ve gathered so far about Shinran’s teachings, Nenbutsu is not a goal we achieve, rather it’s a path we walk throughout life.

I think it’s truly what we all want and need, but lose sight of over and over. I think we all want to be compassionate and to save other sentient beings—even while drowning in birth and death, drowning in life. Bills come due, family members get sick, routines kill time, and we make mistakes. Apocalyptic fires darken the sky.

While a storm brews and the waters in which we sail swell and thrash about, I feel Nenbutsu isn’t an answer that solves everyday problems, rather, it’s a path liberating us spiritually.

Now I’m back home from Japan, remembering when I was a little boy trying to get a video game to work. The Nintendo console refuses to read a cartridge, a TV screen flashes, emitting little sound bites. Frustrated, I take out the cartridge, blow on it, trying to shake off dust. I re-insert the game, hit reset again and again, then give up. Taking a deep breath, my mind goes blank, not realizing I’m really part of so much more.

Joseph Deschenes is a member of Berkeley Higashi Honganji temple in Berkeley, California.