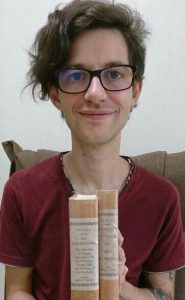 First I thought, “I’m definitely not interested in that Pure Land thing.” Now I hope to share Jodo Shinshu in my home country France.

Raised an atheist with no personal interest in religion, I started my working life and began living on my own. I gradually began feeling a lack of purpose. I read about the Beat Generation—including writers in the 1950s such as Jack Kerouac and Allen Ginzberg—and their interest in Buddhism, which piqued my curiosity. I bought a “Buddhism for Dummies” book and learned about the Buddha’s life and various teachings.

After reading the book, I remember saying, “I’m not sure which tradition to choose, but I know for certain I’m not interested in that ‘Pure Land’ thing.” I also thought of Buddhism more as a philosophy than a religion.

I learned about Theravada Buddhism and began sitting meditation. There were no Theravada temples where I live in France, so I studied largely from books. Soon some questions bothered me: “How can I get rid of passions? Am I capable or even willing to get rid of them?” I also began feeling the monastic way was only for select people to free themselves from suffering, which seemed unfair. Buddhism was supposed to be a path open to everyone.

I turned to Mahayana and Zen Buddhism. I meditated twice a day and after awhile, I realized something was wrong. Instead of calming me, I felt increasingly arrogant and selfish.

In 2013, I visited Japan and discovered for the first time Buddhism as a living religion. I visited Kyoto and saw the one thousand Kannon statues at Sanjusangendo temple, astonished by the amount of work and devotion required to create such a wonderful place. It changed my view that Buddhism was only a philosophy.

However, it was a small Amida Buddha statue that most moved my heart. The Mikaeri Amida Buddha at Eikando Zenrin-ji temple is posed with head turned, looking back, as if to say, “No one will be left behind.” 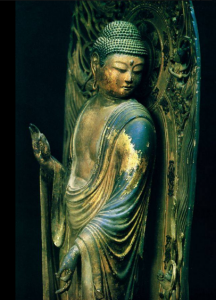 After returning to France, the image of Mikaeri Amida stuck in my mind. I researched Pure Land Buddhism and found information about Shinran Shonin.  Shinran wrote, “In reflecting on the great ocean of shinjin, I realize there is no discrimination between noble and humble or black-robed monks and white-clothed laity, no differentiation between man and woman, old and young. The amount of evil one has committed is not considered, the duration of any performance of religious practices is of no concern.” This exactly was the answer to my concerns about Theravada and Zen Buddhism. I wanted to know more, so I read more books about Jodo Shinshu, mainly in English.

There are some Jodo Shinshu books in French, thanks to the translations and works of Jérôme Ducor, a Swiss Jodo Shinshu priest, but they’re limited in number.

Still, I wondered, “What is Amida and the Pure Land?” I couldn’t believe literally the descriptions in the sutras. Nevertheless, I could feel something when putting my palms together in gassho, entrusting myself to Infinite Compassion and Wisdom.

I began reading the writings of Manshi Kiyozawa and those of his disciples. I read many times the book “December Fan: Buddhist essays of Manshi Kiyozawa.” I treasure his essays such as “My religious conviction,” especially when saying, “when I am aware of liberation through Power Beyond the Self, the way to live my life become clear to me.”

These writings provide a modern day way to understand teachings from the past, making them deeply meaningful today. I decided to study more.

In 2018, my company allowed me to take a six-month unpaid leave from my job as a biomedical engineer to study Japanese language in Kyoto. My goal was to eventually study Jodo Shinshu. Otani University professor Michael Conway allowed me to attend classes and workshops. He introduced me to the head minister of Okazaki Betsuin temple. Before my stay ended, I participated in a ceremony to receive a Dharma name (Japanese: kikyoshiki), receiving the name (信之) shinshi, which means “faith” and which also contains a character from Kiyozawa’s name. 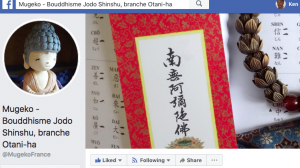 In the near future, we hope to launch a French website to post in articles, translations and information. French people will soon be able to learn about Kiyozawa, Ryojin Soga, Kenmyo Takagi, Daiei Kaneko and other important Shinshu teachers, as well as Shinran Shonin and Rennyo Shonin.

I hope more French-speaking people will become interested in Jodo Shinshu. Maybe we can even start a small dojo in the French countryside where I live.

I’m sure many people would be interested in Jodo Shinshu, helping them to live a more meaningful life.