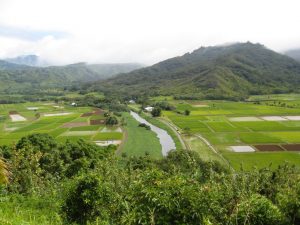 In Hawaii, a health treatment center’s sign welcomes people with, “We understand the connection between the body, mind, and spirit,” reminding me of Shin Buddhist teacher Ryojin Soga, who said, “My life connects with mountains, river, and land.”

Recently this year, a Buddhist minister, who worked as a hospital chaplain in Japan, visited me and wanted to see how patients were treated in Hawaii. We went to Waianae Cost Comprehensive Health Center and during the visit a big question arose in my mind.

The center is located in an ideal location, sitting on a hill with a view of a vast ocean. Behind the hospital is a mountain range, providing a watchful eye from behind. Just above the hospital are unique walking trails designed for “healing.” Just above the entrance to the trails is the sign that quotes the center’s chairman Anthony Guerrero,  “We understand the connection between the body, mind, and spirit. Our beautiful landscaping and walking trails encourage quiet reflection, and offer an opportunity to heal more than just the physical level.”

The center was built for more than curing one’s physical problems. Being there, I suddenly became aware of the question, “Who Am I.” In other words, the center made me become aware I exist only because of innumerable supports I receive. These include support of the ocean, mountains, trees, rivers, and innumerable living beings. Because of all these things combined, I am able to live here and now.

When asking, “Who am I,” I am reminded of an exchange program I once organized between Hawaii and Hokkaido, Japan. Through the program, temple members, community members and Hawaiian friends visited Hokkaido for cultural exchange.

It taught me that I also live because of my connection to the “Walk for wellness, Walk to learn” environment. I was so moved when the Hawaiian leader acknowledged this truth to the group. Reflecting on it later, I was amazed at the similarity between this Hawaiian way of introducing oneself and with a traditional Japanese style of writing letters.

Traditionally, it was natural for Japanese people to think about how their existence connects with nature. In the traditional Japanese letter writing style, the writer first begins by describing nature, and then by describing the relationship between themselves and nature. The main subject was presented only after the first two descriptions.

Nowadays, many people have forgotten about this traditional style. Modern Japanese people tend to start letters writing about themselves and continue with the subject of themselves. We tend to think we exist independent of nature, but it’s actually due to nature’s support that we exist.

Thinking about these things really helped me answer the question “Who Am I?”

What do you think?