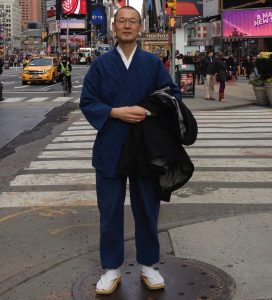 Shakyamuni Buddha, founder of Buddhism said, “Our lifetime is filled with suffering.” He sought a path to free our selves from suffering. He experienced total calmness through deep sitting meditation, awakening to universal truth leading to spiritual freedom. I think this kind of meditation can help us overcome our differences in today’s world.

These days there are many conflicts dividing our world related to politics, religion, race and gender. It seems there’s increasing discrimination between people with different religions and opinions. Even within families, workplaces, communities and schools, communication is lacking. We humans live amidst a sad and miserable state of affairs.

Meditation can help. I recommend meditating the following way.

I think the biggest conflicts between human beings comes from our big brains, in other words, we put too much trust in our thinking. Our thoughts tend to split the world in two, dividing everything into opposites: right and left, white and black, man and woman, good and evil, happy and unhappy, Christian and Muslim, enemy and friend.

The Buddha explained this kind of dualistic thinking characterizes human nature, ultimately resulting in conflicts within our selves and other people. When dualistic thinking gets beyond our control, we become angry and begin to hate, reject, kick out, abuse, mistreat, insult and perhaps even physically harm others. These tendencies are inherent in human nature, which means all of us potentially may act this way.

We learn from Shakyamuni Buddha how to transcend dualistic thinking to realize a mind filled with equanimity and peacefulness. I think practicing sitting meditation in our daily lives, filling the lower belly with power, helps to contain our dualistic and discriminative thinking. This activity is accessible to everyone, helping us find peace and equanimity within ourselves and ultimately with other people.

I’d like to recount a story about Honen Shonin (1133-1212), who’s considered the founder of the Jodo (Pure Land) sect of Buddhism in Japan. Honen was a great Buddhist teacher. When he was nine years old, a samurai warrior attacked his father. As he lay dying, his father told him, “You may have a strong desire to avenge my death. Do not seek revenge on another man. I will soon die. Please seek the true world in which this other man and I together are saved without fail.”

These words caused young Honen eventually to become a Buddhist monk. For many years, he strived to find such a world. Finally at age 43, he encountered the Buddha world called Hongankai, or “vast sea of Buddha’s Original Prayer.” Honen began teaching there’s a world of great unconditional compassion in which our self-centered ego and dualistic thinking are broken and becomes one flavor, where friends and enemies together are saved without discrimination.

Honen composed this verse: “The moonlight shines everywhere, but it dwells only in the heart of one who feels grateful for it.”

The Buddha’s deep compassionate prayer, which certainly wants to save our minds, always shines softly like moonlight. The light breaks our self-centered desires and dualistic thinking and lets us enter a vast and peaceful world, where Buddhists, Christians, Muslims, Jews, atheists, black people, white people, brown people, communists, prisoners and others live together in diversity. Just as the world has innumerable rivers flowing into a vast ocean, they naturally become a single salty taste. This is a world unclouded by divided and dualistic thinking.

and most wonderful wonderful!

and yet again wonderful…”

Therefore by meditating deeply and listening earnestly to the Buddhist teaching in our daily lives, we may discover this wonderful world and live peacefully in diversity, walking hand-in-hand with each other.

Finally, I’d like to quote the following hymn composed by Shinran (1173-1262), the founder of Shin Buddhism, a disciple of Honen) to express the Buddha’s world.

“The wheel of light of liberation is limitless. All are touched by this light. Buddha says it frees us from concerns with ‘is’ or ‘isn’t.’ Return your life to the awakening that brings true equanimity!”