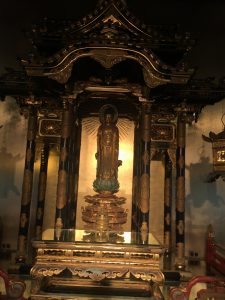 We learn much about the Buddhist teachings by understanding the meaning behind our temple’s altar and ornaments. First, let’s be clear: Amida Buddha isn’t an idol we worship.

The Amida Buddha statue standing on the altar is a symbol of infinite wisdom and compassion. You may know the Buddha’s most famous teaching that says, “Nothing is permanent, everything is changing.”

This impermanence teaching was expressed when terrorists destroyed huge stone Buddha statues in Afghanistan in 2001. If you remember, Buddhists did not fight with the terrorists. Because Buddhists understand all things are impermanent—especially ancient statues—we should not become attached to them.

During a Sunday service, someone asked me why Amida Buddha’s eyes are half-open and half-closed. The answer symbolizes how Amida Buddha lives in this world. 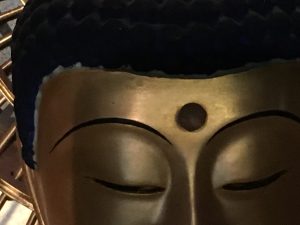 If our eyes are completely closed, we cannot see the real world. If our eyes are fully opened, we are swayed by the real and “defiled” world. Amida Buddha’s eyes symbolize how we seek life’s truths, while also seeing truths of the defiled world.

The Buddha taught us “to live like a lotus.” Lotus flowers are beautiful, but those flowers can only grow in a muddy pond. The mud represents this defiled world and our suffering. The mud nurtures the lotus, which allows it to blossom. In the same way, we awaken to life’s great truths because of defilements, because of suffering.

On the altar’s right side is a picture scroll of Shinran Shonin, who is founder of Jodo Shinshu Buddhism. Here too we may learn from Shinran’s eyes. Despite seeking spiritual truth, he spoke honestly about his own worldly desires.

Although Buddhism teaches that three poisons—anger, greed, and ignorance—afflict everyone. Shinran admitted how he was personally afflicted by these poisons. 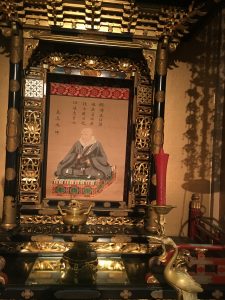 Therefore, the defiled world is not an objective problem, but rather, it’s a subjective problem. Shinran did not insist he was pure and others are dirty, but said his eyes were clouded by anger, greed, and ignorance.

I’m reminded of the great Shinshu teacher Rev. Ryojin Soga, who understood deeply Shinran’s teaching. Rev. Soga’s philosophy of living and understanding truth was not limited to the study of Buddhism, but rather, extended to reading newspaper accounts of real world events, such as murders, accidents, theft, drug abuse, alcoholism, sexual assault, harassment, and corruption.

In thinking about perpetrators of these acts, Rev. Soga always thought he shared similarities with these people. He didn’t judge them because he knew he potentially could commit the same crimes, given certain karmic conditions.

In the text Tannisho, Shinran said, “Under the influence of our karmic past, we human beings will do anything.” He also said, “Even if you are called a cow thief, never act as if you are a good person”

When I look sincerely at myself, I agree with Shinran. We aspire to live in a pure way, but Shinran knew he could not. Instead, he preferred to live in this defiled world with others. Shinran’s eyes do not look down or up, but instead, look equally at others on the same level.

When I reflect on Shinran’s words, I think his way of life is most mature. It’s really immature to personally seek a pure way, a so-called “right” way, while ignoring our true self and ignoring our fellow human beings.

What do you think?