I once visited Thich Nhat Hanh’s Blue Cliff Monastery in upstate New York. When I was about to leave, a friend gave me a calligraphy written by the famous teacher that said, “The Pure Land is here and now.”

I immediately thought, “Oh, this is a koan (Zen riddle) that Thich Nhat Hanh is giving me.” The koan asked, “Miki, what does Pure Land mean to you? 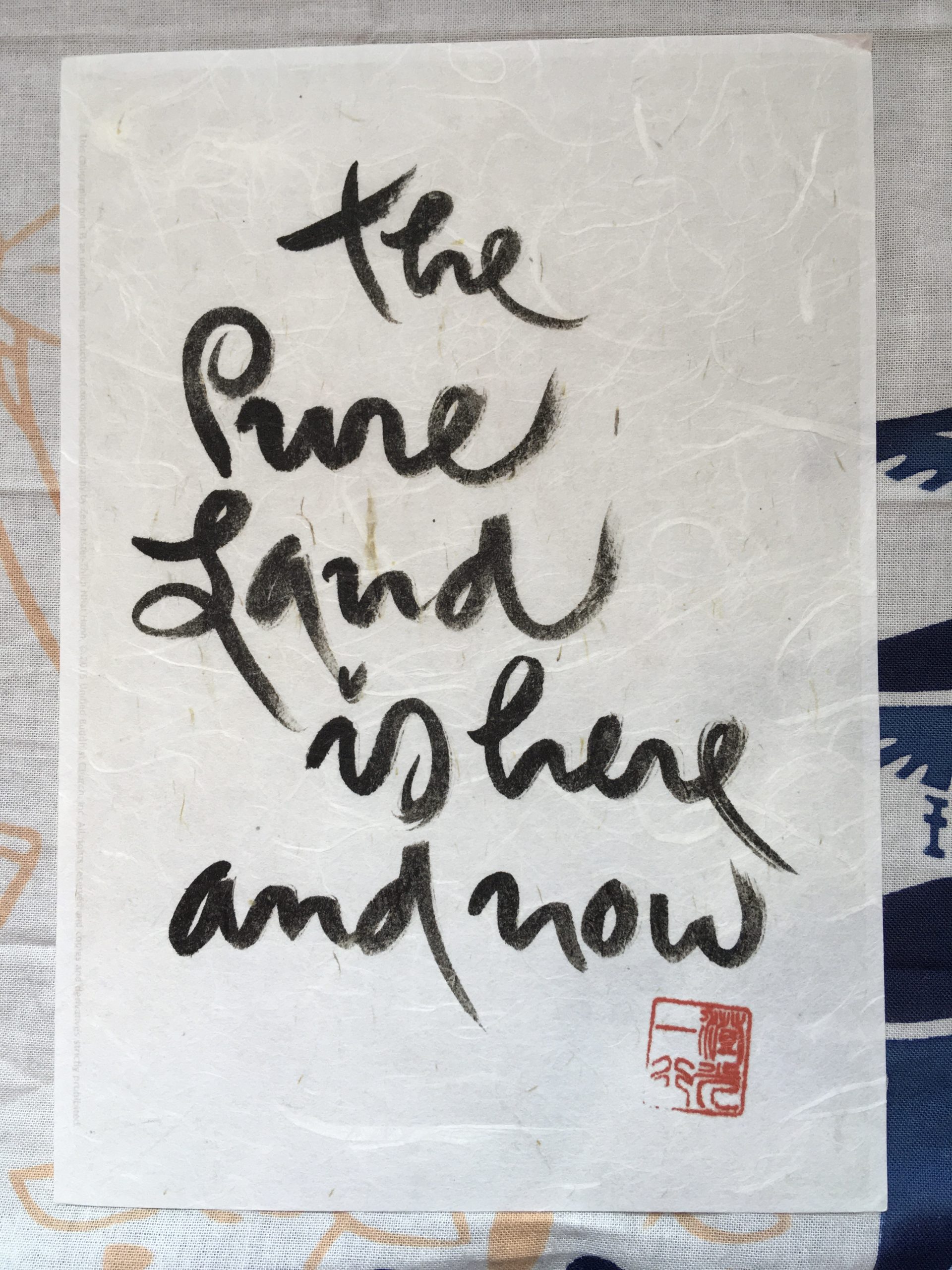 Before my visit in 2019, I read his book, “The Other Shore – A New Translation of the Heart Sutra with Commentaries.” I learned much and felt the master’s warm heart, loving kindness, and transcendental wisdom, like bodhisattva Guanyin (Kannon), who helps people everywhere realize true peace within.

At the monastery, I experienced various mindfulness practices, including sitting-meditation, slow walking-meditation, and silent meal times. His calligraphies hung from walls, such as, “Enjoy the present moment” and “This is it.” They were bits of satori (enlightenment) from a Zen master. But his silent voice nagged me: “Miki, are you living in the Pure Land here and now? Are you enjoying the present moment?”

Returning home, I heard this voice as I walked the streets of Manhattan and rode the subway. I wished I could’ve visited him in Vietnam, where I’d bow deeply and say:

“Thay (“teacher”), my heart already lives in Pure Land here and now. I can’t always enjoy the present moment because my mind flies to the past, future, and other things. Still, Pure Land is here and now. It’s the Buddha Land where Amida works 24 hours a day, 365 days a year, to save the defiled me. This doesn’t happen after my death. This is happening now. This is it! Namu Amida Butsu!”

Ancient sutras describe Pure Land—“Land of Supreme Bliss”—as a place where Amida Buddha works to save all sentient beings. It symbolizes Ultimate Truth, perfect peace, and happiness. Traditionally, it’s said one attains birth in the Pure Land after death through the power of Amida Buddha.

In 12th century Japan, Shinran Shonin studied these Buddhist scriptures and wondered how he could possibly attain spiritual awakening. He realized, it wasn’t through his own limited powers, but rather, from Amida’s power. He wrote books, letters and hymns based on his understanding. A hymn states:

Since I have heard Amida’s transcendental Vow of his Compassion to save us,

and our defiled bodies filled with blind passions are not changed,

my heart is living and playing in the Pure Land.

Although a bonbu (foolish person with blind passions), Shinran felt the Pure Land in his heart. In a letter, he wrote:

One who truly cherishes faith (awakening) in Pure Land, although one’s body is shameful, defiled and wicked, the heart already is equal to Nyorai (Tathagata/Buddha).

One who cherishes faith (awakening) in Amida is already and always living in the Pure Land within the heart.

Shinran felt Pure Land isn’t a physical place where one goes after death. Rather, it’s spiritual awareness of Amida’s working, in other words, Nirvana or enlightenment. “Pure” means undefiled by self-centeredness and blind passions, thanks to Amida’s great compassion and transcendental wisdom.

“Born in Pure Land” means awakening to Amida’s vow to save all sentient beings. It means feeling in our hearts Amida’s compassion while living in a confusing world filled with anxieties and suffering. It’s liberation from samsara, or transmigration, caused by blind passions and delusions, created by past karma. It’s spiritual freedom in this life.

We find our inner self when namu-amida-butsu is pronounced once and for all. My conclusion is that Amida is our inmost self, and when that inmost self is found, we are born in the Pure Land.

Now, regarding the Name (namu-amida-butsu), Shinran states, “Once the Name is pronounced, that is enough to make you be born in the Pure Land.” Birth in the Pure Land is an event that takes place while we are still living in this life.

Let us now turn to Shinran and see what he says about the naturalness and spontaneity in living. The following passage is paraphrased from the Letters of Shinran:

In order for the devotee to be saved by Amida and welcomed to the Pure Land through pronouncing the Name, namu-amida-butsu, in all sincerity, the devotee cannot know what is good or bad for him. All is left to Amida. That is what I, Shinran, have learned.

Anyone can walk the Pure Land path because everyone has Buddha-nature—the potential to become awakened by Amida’s universal prayer. Shinran’s teacher Honen, touched by this heart of Amida, wrote:

Moonlight shines everywhere, but it dwells only in the heart of the one who is grateful for it.

Those who truly attain Faith (Awakening) in Amida,

as they pronounce Amida’s Name (namu-amida-butsu),

always being mindful of the Buddha,

wish to respond to the great benevolence.

Jodo Shinshu Buddhism emphasizes Namu Amida Butsu, which usually is translated as “I take refuge (or entrust) in Amida Buddha.” But really, Namu Amida Butsu means Amida Buddha is calling us. Think of it as “Release yourself to ‘Amida,’ or ‘Infinite working of the universe’ or ‘Power beyond self.’”

When the Buddha’s call awakens me to the realization that “I’ am nothing but a manifestation of Infinite Power with no permanent self, I can’t help but say—with gratitude and joy—Namu Amida Butsu.

In the book, “The Other Shore,” Thich Nhat Hanh explained the “self,” or “I,” doesn’t exist by itself. Rather it exists because of innumerable connections to other things. He called this
“inter-being.” This is the essence of all Buddhist teachings.

For me, Namu Amida Butsu expresses “non-self,” the “me” manifested by Amida, Infinite Power beyond self (i.e. “Other Power”).

Shinran wrote Shoshinge (Hymns on Nenbutsu of True Awakening) explaining the essence of Pure Land teachings. In Shin Buddhism, these hymns are chanted daily, similar to how the Heart Sutra is regularly chanted in Zen Buddhism. Shinran composed many insightful verses describing Amida’s untiring Great Compassion, such as:

When one moment of thought filled with joy rises,

One attains Nirvana even without destroying evil passions.

Just as all waters flow into the ocean and gain one salty taste.

The mind-light that takes all in keeps them always illuminated and well protected.

Though the darkness of ignorance is already broken through,

The dense clouds of greed and infatuation, of anger and hate,

Keep on hovering over the sky of true faith.

Behind the clouds, the brightness reigns and there is no darkness.

One who gains faith see Buddha, respects him, and is filled with joy,

He leaps, crosswise, over the five evil forms of existence.

That even when beings who are defiled and confused are awakened to the faith,

They will realize that birth-and-death (samsara) is Nirvana itself.

Let even the vilest criminal pronounce the Buddha’s Name,

And be convinced for himself: “I too am under Buddha’s protection;

Though I am not able to see him because of my eyes being obscured by evil passions,

The Great Compassionate One is, all the time, untiringly shining upon me.”

During daily morning service, I chant Shoshinge. In these verses, I’m reminded how Amida brings me to the Other Shore (Pure Land) of spiritual salvation in this life, despite my heavy and sinful karma. Here and now, I’m embraced by Great Compassion. Naturally, Namu Amida Butsu flows from my mouth. This is my greatest happiness.

Zen monk Ryokan, who lived in Japan two hundred years ago, composed a favorite poem of mine. It says:

Stop calculating in one way or another.

Release yourself to Amida’s original vow.

Just be mindful of the present moment.

Don’t return to the past, nor worry about the future.

My mind flies to the past, the future and to various things. Delusion disturbs my mind. Ryokan reminds me, “Miki, here is everything. Focus on the present moment!” Immediately, I’m taken to Pure Land (the Other Shore).

We must have a spiritual basis that goes beyond ethics and that enable us to be calm in any given situation. We must arrive at the great spiritual peace that will enable us to live calmly in the present moment.”

We are absolutely within the hands of Power Beyond the Self.

Ah, liberation through Power Beyond the Self! How my awareness of it frees me from this world of delusion and suffering! How it makes me enter the Pure Land of peace and tranquility! At this very moment I feel myself being liberated through my awareness. If it had not been for Shinran’s teaching about liberation through Power Beyond the Self, I would never have avoided confusion and despair. Thanks to his teaching, I can enjoy my life in a bright ocean filled with serene winds, even though I am in darkness filled with waves of defilement.

“We are absolutely within the hands of Power Beyond the Self.” To me, this means the same as “Pure Land is here and now.” Kiyozawa enjoyed the present moment when he wrote, “I can enjoy my life in a bright ocean filled with serene winds, even though I am in darkness filled with waves of defilement.”

When I think deeply about this, I conclude that it is precisely because I do not rejoice in nenbutsu, when I ought to be dancing with joy, that I feel all the more assured of birth in the Pure Land. It is our blind passions that keep us from rejoicing when we should rejoice. The Buddha, knowing that this would be so, said that we are all foolish beings filled with blind passions. That is how I know that Amida’s compassionate Vow was made for people like us, and so feel all the more trust in it.

(Strategies for Modern Living, A Commentary with the Text of the Tannisho, Alfred Bloom transl.)

In his book “The Other Shore,” Thich Nhat Hanh wrote:

So we don’t have to go and look for nirvana, because nirvana is our true nature — the nature of no beginning and no end, no birth and no death. If we are able to touch our true nature, then we transcend all fear, all anger, all despair, because our suffering is born from these notions: birth and death, being and nonbeing, coming and going, same and different. Nirvana is not the object of our searching, and we do not need to enter nirvana because everything is in nirvana already. Our reality is the reality of no birth and no death. Our reality is the reality of no coming and no going. We are perfectly in nirvana. We have been nirvanized from the non-beginning.

What do you think about these words? I think they are insightful Dharma words rooted in his deep experience with Zen. Similarly in Shoshinge, Shinran wrote:

That even when beings who are defiled and confused are awakened to the faith,

They will realize that birth-and-death (samsara) is Nirvana itself.”

“When one moment of thought filled with joy rises,

One attains Nirvana even without destroying the evil passions.

Just as all the waters flow into the ocean and gain one salty taste.

I’m so grateful to my friend who gave me Thay’s calligraphy, which opened my eyes to his teachings and mindfulness path. Although he has passed from this life, I will continue to learn from him.

Both Shinran and Thich Nhat Hanh share similar feelings, reminding me of Thay’s koan to me:

“Enjoy the present moment. The Pure Land is here and now. This is it!” I respond by saying, “Namu Amida Butsu.”

To me, this is the message Shakyamuni Buddha gave to us. Thich Nhat Hanh also must have received it. We live in the Eternal Now, the present moment. The wondrous working of Infinite Power, Amida, creates this moment. Let’s be mindful and live this Dharma accordingly. Here and now is everything!