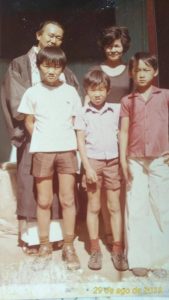 In Brazil, Rev. Marcos Sawada grew up in a temple and hated the life that came with it. It always seemed busy and there was no privacy. He thought his father, a minister, was selfish and egotistical. The last thing he wanted was to follow in his father’s footsteps. His father and mother, also a minister, wanted at least one of their children to enter the priesthood. “Every time I refused because I really had an aversion to even thinking of becoming a minister.”

The world has a curious way of shaping a life. In the end, Marcos followed his father’s path, not only becoming a priest, but also moving to a foreign country to spread the dharma. In July, his father passed away at age 99. Marcos now sees his father as a true Jodo Shinshu follower. “He continues protecting me and guiding me as the light of Buddha’s Wisdom and Compassion,” he says. “Thank you dad.”

Far from the small town in Sao Paulo, Brazil, where he was born, Marcos currently is minister of Kaneohe Higashi Honganji temple in Hawaii. He speaks to members in English and Japanese, using his native Portuguese at home.

While growing up in the 1960s, his father gave the whole family, altogether, rides on a small motorbike—Marcos, his two brothers and mother. They didn’t have much money, so his father improvised in many ways, for example, making kites for the kids and sharpening his own knives. He also made Japanese sweet beans and different sauces for barbecuing meat. He liked to drink beer and Japanese sake.

Still life was tough. His parents always seemed to be working, people always seemed to be visiting, there never was enough money, and the family struggled. “I really used to think that living in a temple meant a life without privacy and lots of problems,” Marcos says. “I wouldn’t have recommended anyone to live at a temple or become a minister.”

As a child, Marcos loved sports and dreamed of becoming a soccer player, but realized he was too short. He majored in physical education and pursued work in professional soccer. He eventually achieved his goal by working for a professional soccer organization in Japan. But he grew frustrated and disgusted with the politics, money influence, and backroom maneuvering of professional sports. He quit. He decided to switch course and study Buddhism, attending Doho University in Nagoya, Japan, eventually becoming ordained by Higashi Honganji.

He came to realize that, without his knowing, his parents nurtured him with Buddhist teachings while growing up. Every morning, they sat before the altar and chanted. “They kept loyal to the Buddha’s teachings. My big foundation of Buddhism was right there in their daily life.” 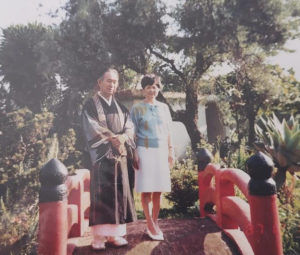 His father often traveled long distances to perform services and meet people in faraway places where Japanese immigrants established communities. His old car periodically broke down on rough roads in the middle of the jungle, incessantly worrying his mother. Nevertheless, people looked forward to visits by “sensei” and hearing the Buddha’s teachings. In Brazil, ministers are regularly transferred between various regions. With little money, the Sawada family lived in four different temples.

His father’s devotion was tempered by World War II. Drafted into the Japanese army, his mother implored him to return alive. “I’ll die in your place,” she said, “but come back alive”—words defying the nationalistic “kamikaze” spirit of sacrificing one’s life for emperor and nation.

At war, his father every day read the “Tannisho,” a classic Jodo Shinshu Buddhist text explaining Shinran Shonin’s teachings, helping him reflect on the harsh conditions and making him question the meaning of human life, thoughts he recorded in a journal. When his superiors saw what he wrote, he was severely punished.

When the war ended, his father returned home and discovered his mother had died. Such were the karmic conditions he could not escape.

“Looking at my parents, they were always busy, working hard and facing many difficulties,” Rev. Sawada says. “Although it was a life full of hardship, I saw a serenity in them like light shining amid impermanence.”

In the book, “Everyday Suchness,” Rev. Gyomay Kubose wrote how water flows easily and softly around barriers, changing shape as needed, but always retaining its essence. Marcos first read the book when he was fourteen. His parents’ lives were like water, an ideal Marcos struggles to attain.

When water is put into a round bowl, it becomes round. Water is not stubborn, as some men are; it adapts itself according to the situation. Yet, at the same time it remains water and never changes its own essence.

“Water is very humble. It always seeks the lowest level. It never tries to be on top or show off but goes to the bottom. The lowest level is the most safe, natural and peaceful place.

Reflecting on his own life, Marcos says: “My mentor was my father, Rev. Nobuyuki Sawada, along with my mother, Rev. Ritsuko Sawada. They gave me my foundation in Buddhism. I learned from them about dedicating one’s entire life towards spreading the Buddha’s teachings.”

The Art of Listening

A Volcano and Power Beyond Self