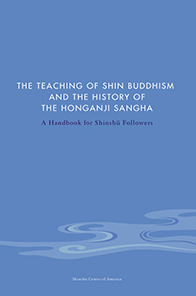 Somebody once told me she learned Buddhism from books and alone tried to practice its ideals. She also tried to teach her kids Buddhism. It was all quite difficult and trying. She said, “It’s hard to be a Buddhist by yourself.”

She joined a Sangha, a Buddhist community, and found support, encouragement and friendship.

Among the Buddhist three treasures – Buddha, Dharma, Sangha – perhaps the most neglected is Sangha. As the Buddha taught, Sangha is most precious.

In Jodo Shinshu Buddhism, sangha has kept Shinran Shonin’s teachings alive through the ages so we now may learn from them. For us, sangha is our denomination, Shinshu Otani-ha, also known as Higashi Honganji.

Higashi Honganji recently published an English edition of a book to help guide and inform our sangha and its leaders called The Teaching of Jōdo Shinshū and the History of the Honganji Community, A Handbook for Shinshū Followers.

This book is a primer for understanding the importance of sangha today, providing context and historical background on how the sangha and religious organization evolved over the years, beginning with Shinran. It also provides an overview of Shinshu teachings and history, daily rituals, Buddhist name ceremony, home altars, and altar ornaments and decorations.

Today, Higashi Honganji actively promotes Dobo-kai activities (gatherings of fellow seekers to listen to the Dharma). The purpose is to help Sangha members deepen their understanding of Shinshu, help them reflect on their lives and to appreciate Shinran Shonin’s teachings. This is the meaning of being a Shinshu follower.

Encouraging followers to study and find personal meaning may be a given and common sense, but historical events and the current of the times sometimes distracts or sends adrift the organization’s focus and mission. As the book recounts, Honganji’s history is filled with violent conflicts, upheaval and disasters. In 1465, the main temple was attacked and burned, forcing Shinshu patriarch Rennyo to flee Kyoto. In the 16th Century, a 10-year battle with military leader Nobunaga Oda ultimately caused a split resulting in Higashi and Nishi Honganji. In the 1890s, Higashi Honganji focused primarily on fundraising after incurring a huge debt from rebuilding after a fire, spurring Buddhist teacher Manshi Kiyozawa to launch a reform movement focusing on doctrinal studies. During World War II, the denomination was complicit with government campaigns, even encouraging young men to sacrifice their lives for the war. In 1995, the denomination issued a “No-more-war” resolution, apologizing and repenting for its wartime actions.

The origins of today’s Dobokai movement began in post-World War II Japan, according to the book. The country was ravaged, having just lost the war, poverty was rampant and confusion reigned everywhere. Kiyozawa’s student, Rev. Haya Akegarasu, was appointed to Higashi Honganji’s top supervisory post as Chief Administrator in 1951 and encouraged people to lead a life based on Shinshu teachings. A few years later, Hōgan Miyatani assumed the mantle, saying “It is very clear we have lost the seriousness of seeking the path of Buddhadharma and have become remiss in our bound duty to clarify the teaching for the sake of self and others.” Miyatani said the denomination should be “the wellsprings of the place for those who seek a peaceful state of mind (anjin) for humanity worldwide.”

On Shinran’s 700th Memorial in 1962, the Dōbōkai movement formally launched. Then Chief Administrator Shin’yu Kurube declared three major points. The first was that “Buddhism is charged with the higher mission of clarifying the true awareness as a human being that modern Europe could not achieve and of addressing the fundamental problem of humanity.” And “while they try to establish democracy based on the individual’s self-awareness,” he said, “it is in the end the egoism of that individual’s self-consciousness which is impossible to overcome.” As history unfolds itself, he said the movement arose out of the deep wish of humanity to resolve its irresolvable problems.

The second point was that “a community of religious faith, that is, a society based on the teaching should be the foundation of the true community for humanity and be the principle of society in the real world.”

The third point addressed how Shinshu temples historically were viewed as a family religion based on tradition. Instead, individuals should seek personal meaning through Shinshu, thus the slogan, “From a family religion to the religion of individual awareness.”

According to the book, “the Dōbōkai movement promoted by our denomination the Shinshū Ōtani-ha was a pure faith movement that responded to the deepest demands of the times and society, and through it sought to be a congregation that gave back its share to humanity. This is the basic direction in which our religious congregation began to proceed in modern times.”

Today, the Dōbōkai spirit is promoted by activities such as monthly discussion groups at temples, lay retreats at the mother temple in Kyoto, local retreats, seminars, lectures and study classes.

This book contains basic information about Shinran’s life, an explanation of the contents of Shoshinge (chanted at most services), which also provides an outline of the Jodo Shinshu teachings. There are also explanations about how to set up a home altar and the meaning of the different objects.

The appendix contains information about organizational bylaws, religious corporations in Japan, and an organization chart of Higashi Honganji, which is more information than most people need, but there’s also a timeline listing dates of important and interesting events, such as the appointment of the first female temple head priest (1992), an anti-war declaration (1995), and The Great Northeastern Japan Earthquake and Tsunami relief efforts (2011).

This book is indispensable for serious students of Jodo Shinshu, a useful guide for anybody who follows the Higashi Honganji tradition of Jodo Shinshu and a good reference to always keep at hand.

-Rev. Yamada is editor at Shinshu Center of America.