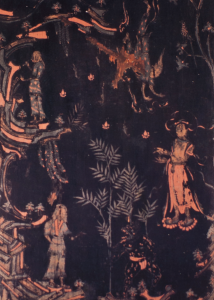 Ultimately, we will die. Before then, how can we live the most meaningful life?

This thought inspired me to read a Jataka tale called, “Boy Ascetic of the Himalayas” (Japanese: Sessen-dōji). This is not merely an ancient story from India. To me, this story is the Buddha urging me to confront my greatest anxiety—death.

Jataka Tales are stories about the Buddha’s past lives, similar to fairy tales for kids, typically simple lessons about virtues such as honesty, friendship and compassion, with talking animals, birds and spirits, and always featuring a character who learns an important lesson. By gaining wisdom this way over many lifetimes, this character eventually becomes the Buddha. One such story is called, “Boy Ascetic of the Himalayas.” The tales goes:

In a former life, the Buddha was a boy ascetic (Sanskrit: brāhmin) living in the snow-covered Himalaya mountains, seeking spiritual truth. The god Indra saw the boy and decided to test his understanding. Disguised as a devil, Indra approached him and recited a verse: “All phenomena are impermanent; this is the law of birth and death.”

The boy ascetic was surprised to hear this verse and wanted to hear the verse’s second half. The devil said to him, “I’m so hungry and weak. I can’t say any more until I taste human flesh and blood.”

The boy ascetic replied, “Okay, if you tell me the second half of the verse, I will offer my body to you. I promise.”

The devil saw the seriousness of the boy and recited the verse: “When we transcend birth and death, we experience Nirvana of eternal peace and happiness.”

The boy ascetic rejoiced at hearing these words, saying, “This is exactly the truth I’ve been desperately seeking at the risk of my life.” He immediately carved the verses on a rock for future generations, wishing to save them from their sufferings.

“I’m now ready to die,” the boy said. Keeping his promise to become food for the devil, he climbed a tall tree and leaped to certain death.

Impressed by the boy’s sincerity in seeking truth, the devil suddenly transformed back to his original body as Indra and caught him softly in his arms.

The boy ascetic was saved.

Indra proclaimed: “Oh wonderful! Really wonderful! You are a true Bodhisattva and in the future you will surely become a Buddha, saving all sentient beings without fail.”

How do you like this story? Is it relevant to your life? I’d really like to know what you think.

Of course, this story is fiction, not fact. Yet, it struck deeply in my heart. After reading it, I thought, “This story is about me! This tale exactly represents the essence of all Buddhist teachings!”

This tale reminds me of a story about a myokonin named Doshu. Myokonin are devout followers of Jodo Shinshu, who are deeply pious and wise, but typically appear as commoners, leading simple lives. To me, Doshu represents the true Buddhist spirit.

After intently listening to Rennyo’s sermons and taking those words to heart, Doshu felt he could finally meet his true parents, through the words, “Namu Amida Butsu” (I take refuge in Amida Buddha (Tathagata)).

Doshu was extremely serious about walking the Buddhist Path. To keep on this path, he wrote down reminders, known as “Twenty-One Resolutions.”

Resolution One: “Never be careless about the most essential matter, the afterlife, as long as I live.”

Resolution Two: “If I am distracted by thoughts other than the Buddha-dharma, think of myself as shameful and turn away from them immediately.”

I try to keep these reminders firmly in my mind. I always seem to forget my “most essential matter,” the afterlife, and transmigrate in this world of birth-and-death (Sanskrit: Saha), filled with delusions and sufferings caused by my blind passions.

What on earth is this most essential matter, the afterlife?

It’s knowing that I’m mortal and must die sooner or later without fail. When will it happen? In 30 years, 20 years, one year, tomorrow or tonight? I just don’t know.

This really is the meaning of the verse: “All phenomena are impermanent; this is the law (Sanskrit: dharma) of birth and death.”

I want to be liberated from this truth of impermanence. I want eternal life. This is my most essential matter, the afterlife. If I cannot attain spiritual liberation, then my life will end in vain, despite whatever money I have, however good my health is, however much people praise me, and however much kindness my family and friends show me. My life is impermanent and this is the dharma, the truth.

The boy ascetic finally heard the verse’s second half: “When we transcend birth and death, we experience Nirvana of eternal peace and happiness.”

When I awaken to Amida’s Eternal Life becoming me, I immediately transcend  my mortal body and mind, and can live in a world of spiritual freedom beyond birth and death.

It’s awakening to the truth that “Now, I am being lived by the infinite working of time and space beyond this self, since beginning-less time.” In Jodo Shinshu, this power is called “Amida,” which means immeasurable and eternal life. I become aware my existence is the manifestation of Amida’s Eternal Life.

In other words, my life is liberated by Amida’s Eternal Life. “Now, Amida’s Life is living me! Namu Amida-butsu….”

For me, the Boy Ascetic’s message reaches me as Amida Buddha’s Primal Vow (Japanese: Hongan) beyond time and space.

Shinran expresses it this way:

Since I have heard Amida’s transcendental Vow of Compassion to save us,

and our defiled bodies filled with blind passions are not changed,

my heart is living and playing in the Pure Land.

Yes, I am mortal, I am impermanent, I am defiled, but simultaneously I can live freely in the world of spirituality beyond birth and death in Amida’s Pure Land.

Where I stand—here and now—I see an answer to the most essential matter, the afterlife, thanks to “Namu Amida-butsu.”

I deeply bow down to the Boy Ascetic.  Namu Amida Butsu

1. This story of the Boy Ascetic of the Himalayas also is found in the Mahaparinirvana Sutra, Fascicle 14.

2. This story was painted on theTamamushi Shrine ( 玉虫厨子 Tamamushi-no-zushi)  in Horyu-ji Temple in Nara in the seventh century. (pictured above)