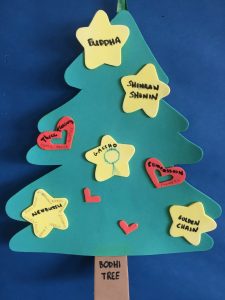 Buddhists officially don’t celebrate Christmas, but many of them decorate trees that suspiciously look like the holiday tree. The running joke is that they’re really “Bodhi” trees.

Of course nothing prohibits Buddhists from enjoying the festivities, but in December we also have an important observance: Bodhi Day, which commemorates the Buddha’s enlightenment.

As the story goes, Prince Siddhartha abandoned a luxurious palace life and searched six years for spiritual truth, practicing harsh ascetic austerities, including extreme forms of fasting and meditation, until he collapse from exhaustion. Nursed back to help with food offered by Sujata, a young village girl, Siddhartha resolved to sit in meditation under a tree until he found an answer.

Bodhi Day traditionally is observed on December 8. Many of our Higashi Honganji temples commemorate Bodhi Day on that day, or a Sunday close to that date.

Bodhi Day is a nice way to celebrate our connection to the historic Buddha, who lived in India some 2,600 years ago and the universal truths that he understood and taught to others, which we follow today. These truths include impermanence, interdependence, and the Oneness of all life.

More importantly, Bodhi Day serves as a reminder and encouragement for each of us to come to our own spiritual awakening, so that we may truly appreciate our lives and the lives around us.

We also have other Buddhist holidays commemorating important events in the Buddha’s life. Our Hanamatsuri service in April celebrates the Buddha’s birth and Nirvana Day in February, observes his passing into Nirvana. Southeast Asian sects of Buddhism typically observe Vesak Day depending on the lunar calendar in April or May, which commemorates the Buddha’s entire life in a single holiday.

To attend a Bodhi Day service, please refer to our calendar for dates and times, or contact your local temple. Happy Bodhi Day everyone!