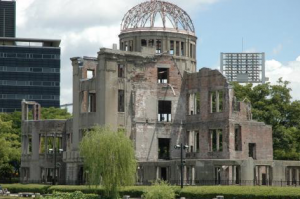 A mass shooting occurred again in August. This time it was in El Paso, Texas. On that day while driving home from our temple camping trip, I listened to the radio news.

A 25-year-old mother shielded her two-month-old son. She was shot. They were at a Walmart store, shopping for back-to-school supplies. “From the baby’s injuries, they said more than likely my sister was trying to shield him,” a woman said. “When she was shot, she was holding him and fell on top of him. That’s why he broke some bones. He pretty much lived because she gave up her life.”

Of course nobody knows what happened exactly at that moment. There’s a possibility the mother shielded her baby without thinking.  It may have been a mother’s conditioned response.

While listening to the news, I recalled tragedies of the World War II atomic bombings of Hiroshima and Nagasaki. Many people burned and perished lying atop one another. I imagined parents and grandparents trying to protect their children and grandchildren without even thinking.

For most Japanese, August is a special month to think about human life. Atomic bombs were dropped on Hiroshima on August 6 and on Nagasaki on August 9. Japan surrendered on August 15.

When I was growing up in Japan, there were many TV programs in August devoted to memorials related to the bombings and to events promoting World peace. I watched many movies and TV programs about World War II. There even were anime films about the horrors of war, such as Grave of the Fireflies (Japanese: Hotaru no haka). Perhaps you’ve heard of it.

According to Buddhism, complex conditions make us hate others. There are political and historical conditions. However, the primary reason why human beings hate each other is because we are foolish beings.

Politics may be debated but there is no single answer on which everyone agrees. Too many things in this world we don’t know whether they’re true or false.

What’s certain is that human beings are fools. I am foolish. It’s imperative to come to this understanding. The Buddha taught within each of us are Three Poisons: Greed, Anger, and Ignorance. These poisons cause suffering and make us disregard the sanctity of human life.

If we understand and are conscious of our Greed, Anger, and Ignorance, we’ll be more respectful of life—both the lives of others and our own.

Consider greed. We really don’t need to consume so many natural resources. After all, originally, we possessed nothing.

Consider anger. It’s hard to forget you hate someone. In history, ethnic hatred has been passed down from generation to generation.

Consider ignorance: People often forget it’s human to make mistakes. We think we are right and others are wrong and therefore we’ll fight wars.

Individually, we cannot overcome Three Poisons by ourselves.

We need help. This help is the Buddha’s voice encouraging us to gain wisdom. It’s the voice of people who came before us, including our teachers, family members and friends, who have passed away. They even include people who we don’t know, such as those who perished in Hiroshima, Nagasaki, and El Paso.

I think they would tell us to create a world of peace and understanding. Their wish represents a great Wish for humankind. To me, this is the meaning of Hongan, Amida Buddha’s great wish for us.

I’d like to share a letter written by a young army officer near the end of World War II. On May 4, 1945, Corporal Nobuo Aihana took off from Chiran air base in Kyushu, Japan, for an attack near the island of Okinawa. He died in battle at age 18 years.

In a letter to his stepmother, Corporal Aihana wrote:

How are you? Thank you for what you’ve done for so long. You raised me since I was six years old. Although you’re my stepmother, I never felt mistreated the way people often think of stepmothers.

You were a mother who looked after me with loving care, a kind mother, a precious mother. I was happy.

But I never once called you “mother.” I resolved many times to say the word, but I must’ve been weak-willed. Please forgive me. How sad you must have been.

This letter, along with Nobuo’s scarf, military sword, and other items were kept together at the family’s Buddhist altar. Aki, his stepmother, considered the letter her most precious treasure.

Nobuo’s brother Shunichi returned to Japan from China in June 1946 and learned of his younger brother’s death. After reading the letter, Shunichi resolved to honor his brother’s wish to treat his stepmother like his real mother.

If we think deeply and connect with voices from the past, then World War II doesn’t seem so long ago. Those mass shootings are not so distant. They involved people who are very much like us. They have something to teach us. We have a connection to them.

In this way, if we listen to the voices of people who have passed away, they help guide us. Their voices represent the Buddha’s voice, guiding us to the world of wisdom and compassion. In this way, we walk the Buddha’s path.

Rev. Osa is minister at Berkeley Higashi Honganji in California.