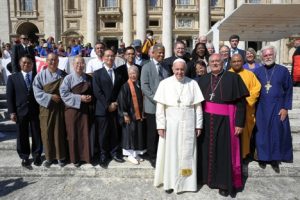 While visiting the Vatican recently, I heard Pope Francis using the words “ego” and “liberation” several times, making me think he was giving a Dharma talk. Even in Italian, I could hear the nembutsu coming through the Pope’s words.

I was privileged to attend the General Audience ceremony at the Vatican in Rome, Italy, in September. Every Wednesday morning at the Vatican, there is a “General Audience” for which people must obtain tickets. When held outdoors, attendance rises to as many as tens of thousands of people.

I was as part of a Buddhist-Catholic delegation from the U.S., presenting a request for funding of the Green Housing Project, construction of environmentally responsible buildings for people in need in Los Angeles, Chicago and Brooklyn, New York. Higashi Honganji is involved in the Los Angeles project.

We presented the request at the Pontifical Council for Interreligious Dialogue on Tuesday, and then on Wednesday our group had VIP seats at the General Audience. After the ceremony, we were first to have a photo taken with Pope Francis.

In his homily given in Italian, I heard the Pope say the words “ego” and “liberation” several times. In the official English summary (one of several languages, each read by a native speaker after the homily), there wasn’t much mention of liberation from ego, but the subtitles of a video clip show the Pope talking about what was essentially the Buddhist Three Poisons – greed, anger and ignorance.

Even in Italian, I could hear the nembutsu coming through his words. He told the audience to open our hearts and share in great compassion with all beings. To me, this message is what Jodo Shinshu calls Namu—bowing down to Amida Buddha and transcending the tyranny of ego. The Pope’s message wasn’t about sin and damnation as one would imagine of stereotypical Christian sermons. Rather, it seemed a call for self-examination and going forward on a path of “Now, life is living you,” which has been our Shinshu Otani-ha denomination’s theme.

After the General Audience, group members began taking their places for photos. Pope Francis came to greet us, pulling from his pocket a memorial card with a photo of late Cardinal Jean-Louis Tauran, who was active in building partnerships with various religious groups, particularly Buddhists. Cardinal Tauran headed the Buddhist-Catholic dialogue that Bishop Noriaki Ito and I attended in Rome three years ago. He held up Cardinal Tauran’s picture to express his appreciation to us in carrying on the work of his longtime colleague.

I was amazed how upbeat and energetic the Pope appeared—almost aglow—despite the heavy pressure he currently faces. Although he greeted us as a group, he made eye contact with each of us that exuded the feeling, “I’m so happy to see you!” The only English he spoke was “Please pray for me.” He didn’t say it in sadness, but more like a cheerful “okage-sama de,” a Japanese expression that means, “Because of your support and encouragement, I have the strength to get things done for the good of others.”

Many of you out there may be critical of the Pope and the Roman Catholic Church, but for me in the presence of this man, Pope Francis, I felt what Higashi Honganji teacher Manshi Kiyozawa calls “Power Beyond Self,”  (the Jodo Shinshu term “hongan riki”). Like I did at the Vatican, we can find much inspiration from around the world and from non-Buddhist religions, which to me is evidence of the universality of the nembutsu teachings.

Rev. Nakai is minister at Buddhist Temple of Chicago, in Illinois.