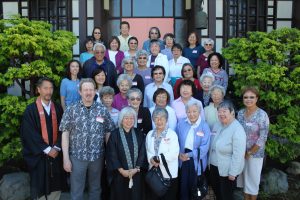 Women play a big role in our temples today and I think the reason why is rooted in Jodo Shinshu Buddhist teachings and history.

Today in the United States, women serve in temple leadership positions such as president, board member, chairperson, committee member, and Dharma school teacher. In our North America district, we now have three women assigned as resident ministers, up from none just a few years ago. Buddhist women organizations have supported our temples for decades through their efforts, fundraising and activities.

The contribution of women is not surprising considering their importance in Jodo Shinshu history and development. For instance, a legendary story about Shinran Shonin (considered Jodo Shinshu’s founder) some 800 years ago recounts how as a novice monk-in-training on Mt. Hiei, he regretfully turned away a woman wishing to hear the Buddhist teachings, explaining how the mountain retreat was restricted to men. He later openly married Eshinni and had children with her. He met with people from all walks of life, including both women and men. Scholars later learned important details of Shinran’s personal life through Eshinni’s letters. Shinran’s daughter Kakushinni, donated land for her father’s ashes, which eventually became the first Honganji temple.

About 150 years later, Rennyo Shonin, considered the “second founder” of Jodo Shinshu, also married and had children. His writings focused increasingly on women, especially after the deaths of his wife and daughter. In his letters, Rennyo constantly emphasized how women were assured spiritual salvation.

The views of Shinran and Rennyo were shaped by the “Sutra on the Contemplation of the Buddha Amitayus” (also called “Meditation Sutra”), a central scripture that serves as a foundation for Jodo Shinshu. The sutra tells the story of Queen Vaidehi, who was imprisoned by a son that wanted to usurp the throne. In her suffering, Queen Vaidehi calls out to the Buddha, who appears before her in prison. The Buddha instructs the queen on practices leading to salvation.

In this sutra, we find a woman as the focus of the Buddha’s teachings. Typically in these stories, men are the focus and they are the ones who become disciples. But in the meditation sutra, a woman is the central focus.

Because of this history and these teachings, I think it’s no accident women are active at our Jodo Shinshu temples. They have become key temple members and a big reason why our sangha consists of both families and individuals.

However, someone pointed out to me that big challenges remain for women within our temple denomination organization in Japan, and their numbers fall short at the higher echelons. There’s been progress but there’s still a long way to go. At local temples as well, I’m sure there’s still progress to be made.

In these times of inequality and discrimination, let us find strength in our Jodo Shinshu teachings, which promote equality and non-discrimination. Let us try to practice what we preach at our temples, within our sangha and in the greater world.

Rev. Yamada is staff editor of Shinshu Center of America and is based in Berkeley, California.