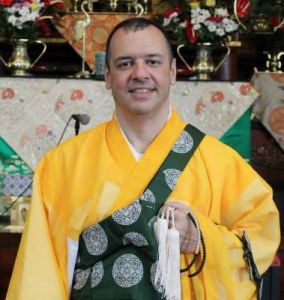 Higashi Honganji landed in South American a generation later than in North America and Hawaii, which perhaps explains why our growth lags. Still, it’s a reminder we face a long road ahead to grow and thrive in our South America district, especially if we want to train and ordain new ministers.

I believe we may work towards building a brighter future by focusing on three pillars—formal planning, consistent execution, and globalization—using technology as a leading tool to bring our efforts to fruition.

Goals include establishing a long-term plan to train and ordain new ministers. We also need to promote current basic ordained ministers with “tokudo” certification to the full working minister’s certification of “kyoshi.”

However, we also must take into consideration that these ordinations cannot be done only in Japanese; they also must be conducted in languages native to the foreign districts outside of Japan, which for us mean English, Portuguese and Spanish. Ordination is the needed foundation to perpetuate our efforts, so the ordination program should be a top priority. Eventually we should also have a masters degree program that will provide an opportunity for further study and development.

Of course, quantity is not the objective, but we cannot ignore the aspirations of our fellow participants who want to be ordained and whom I think would result in high quality ministers serving our sangha.

Once we have more bodies, we could offer more activities in different areas in a broad geographic area in South America, not only at our temples, but also on the Internet and on social media. Following this stream, we could make ourselves more attractive to new generations of people, transmitting the Nembutsu to cultures outside of Japanese. Because it is not just about language, it is about how to communicate and educate.

Planning should include strong execution to ensure deadlines are met, responsibilities are delegated, progress is made, and goals are achieved, which will help us ensure a bright future. Planning should not depend on individuals, but rather on processes and policy.

Globalization could help us grow while avoiding redundant efforts. By this I mean that our South America, North America and Hawaii districts may help each other, share knowledge and resources, which will help take us to the next level. Together our organization will be stronger, resulting in more people able to hear the Nembutsu teachings.

Rev. Ghigonetto is a minister in Sao Paulo, Brazil.