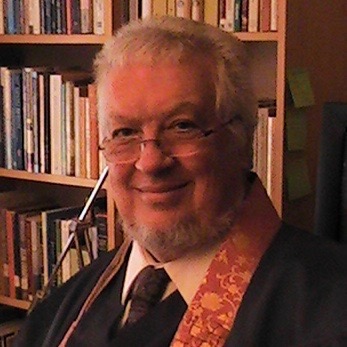 Frederick Brenion embraced Christianity whole-heartedly growing up and was an insatiably curious teenager. He became interested in world religion and sacred books. Yet, big questions nagged him: “What is truth?” “Who am I?” “Why am I?” Turns out, a children’s story held the key.

Rev. Brenion is a Jodo Shinshu priest with the Higashi Honganji North America District based in Southern California. From his book-lined room, wearing his priest’s garb, he good-naturedly spoke online about his encounter with Shin Buddhism. He began first by telling a classic children’s story by Hans Christian Andersen called “The Ugly Duckling.” He said, “I find this story to be a lens to see my own story.”

Once, in a duck’s nest, a chick hatched from an egg. The chick looked and acted differently from the mother duck and other chicks. This chick could not quack, waddle, or swim like the others, always failing. It was considered “ugly” compared to the other ducks.

This “Ugly Duckling” soon left the flock. Wherever it went, it was bullied for being so ugly. Time passed, and alone the duckling endured the winter. Spring arrived and the ice on the lake melted.

A flock of swans flew onto the lake. They looked so graceful. Would the swans ridicule the duckling? “Why would we?” a swan said. “You are one of us.” Feeling they were just mocking, the only thing to do was bow in humility. Just then, the duckling saw its reflection in the water. This duckling looked just like the beautiful swans.

The duckling saw it was really a swan. The duckling realized its true self. Discovering its “true face,” the Ugly Duckling found a sense of belonging and affirmation with the other swans. It soon flew off with the flock.

Before becoming a Shin Buddhist, Frederick felt much like the “Ugly Duckling,” somehow different and unable to fit in. When he attended college,  he majored in religious studies and philosophy, studying many books. He decided to become a librarian, enabling him to access books and stories that might help answer questions about life.

He worked in a state mental hospital for the criminally insane. He organized the library, acquired a breadth of new books, and helped inmates, answering their questions, and sometimes, listening to their troubles. In doing so, he discovered his own humanity, seeing that their lives and his were similar in many ways. He came to realize his own “foolish nature,” which Jodo Shinshu calls “bombu.”

Frederick continued to probe and examine his own ideas and opinions. The growing weight of his problems and difficulties eventually led to a complete collapse of his beliefs. Instead of having a firm view on various subjects, he now had “no-views” on many things. He never expected the absence of views would be so important in the Buddhist path. Previously, he studied and understood through “Christian eyes,” but now, he began to see with “naked eyes,” in other words, without filters. Still, he had further to go.

The next day, his daughter accompanied him on an errand. She told him, “Dad, you would make a good Buddhist.” That moment was like the “ugly duckling” story when it discovered itself as a swan. He suddenly saw with “naked eyes” that Buddhism was really about seeing your true face. For Frederick, it was a Buddhist face. He immediately imagined himself wearing Buddhist robes and walking peacefully through a grove of trees. His world suddenly changed.

Frederick threw himself into the study of Buddhism. He researched and read about various Buddhist teachings and traditions. In time, he realized that reading was not enough. To truly learn and live the Dharma, he needed a Sangha, a Buddhist community.

Initially, he considered joining a Zen, Tibetan or Theravada Buddhist group. From his readings, he perceived Jodo Shinshu to be a Christian version of Buddhism–Pray to Amida and go to the Pure Land. He thought, “Why would I want that?” He had left Christianity behind.

However, he couldn’t find a group where he felt comfortable. He eventually found a listing for the West Covina Buddhist Temple, which was 55 miles away from his home. He really wanted to hear the Dharma. It was a Higashi Honganji temple that followed Pure Land Buddhism, which hadn’t appealed to him. What else could he do? He decided to check it out.

At a Sunday service, he sat in the last row to observe. He felt a mixture of “curiosity and some dread,” and was ready to slip out quietly if needed. Temple member Joanie Martinez warmly greeted him. He was relieved that part of service was conducted in English. With the service book, he followed the chanting, reading an English translation of “Shoshinge” (Shinran’s Hymn of True Faith). He was utterly astonished. Some passages leapt out at him.

Afterwards, he met Rev. Kenjun Kawawata, who was the temple minister. Frederick said, “His English was not great but his heart shined openly with joy in his talks.” Frederick kept coming back. He was won over.

What really grabbed Frederick were the discussions after service. His own words just poured out. Too many big words at times, but that happens when a librarian comes to the Dharma. Above all, he found that like the Ugly Duckling, he really fit in for the first time. He also learned the true importance of Jodo Shinshu. That at the center of his being, he was not that bright of a chap but very much a foolish person, a bombu. He felt accepted as he was. The nenbutsu, the words “Namu Amida Butsu,” struck a deep chord with him. It seemed key to answering his questions.

In 2011, Frederick became an ordained Jodo Shinshu priest, When he visited the mother temple in Kyoto, he felt an appreciation for Jodo Shinshu’s historical struggles, along with his own feelings of helplessness. “But that is the place where we all must begin,” he said.

Rev. Brenion currently assists with services and serves as needed in the North America District. He says, “When I first visited the temple, I was warmly welcomed. Now I want to warmly welcome all who come.”

(This story was adapted from the publication, “Mon: Hearing and Gate,” Vol. 25, 2021, published by Higashi Honganji)