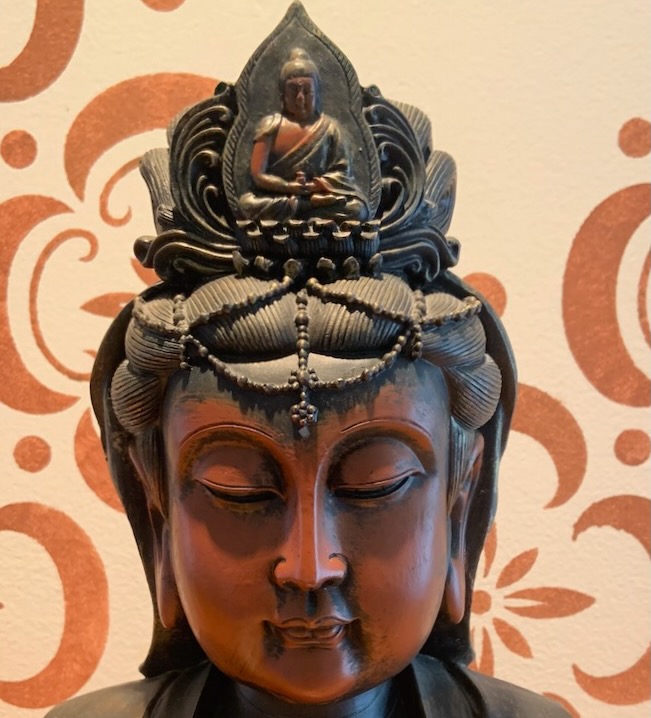 During these times of gender fluidity, it’s time to declare: Amida Buddha is “nonbinary.” This Buddha is neither male or female, but both. People disagree but I have a good argument.

It’s an important issue with big implications. Jodo Shinshu focuses on Amida more than Shakyamuni, the historical Buddha. And these days, some people don’t identify with the two genders of male and female. Rather, they feel a mix of both. Thus the term “nonbinary.”

Using the power of myth and symbolism, Amida represents infinite wisdom and compassion. According to the Larger Sutra on the Buddha of Infinite Life, Amida was a king who became a monk named Dharmākara before becoming a presumably male Buddha. Conversely, no “queen” became a “nun,” who became a “female” Buddha.

However, symbolically Amida represents great wisdom that helps everyone without discrimination. Wisdom is neither male nor female. Similarly, statues of Buddhas tend to show androgynous figures, embodying both male and female traits. To me, Amida—when becoming a Buddha—transcended male identity to become all genders.

Not long ago, I made this argument to a scholar who used “he” for Amida in a Buddhist text he translated from Japanese. As the English editor, I changed “he” references to the name “Amida,” hoping to avoid pronouns and controversy. I imagined women, nonbinary and some men friends of mine cringing if they saw “he” used in this context.

I explained to him (the scholar) today’s growing awareness about gender fluidity, and about people I personally know who’ve discarded traditional pronouns in favor of “they” and “them.” He insisted on using “he” because it was traditional and because of the male Dharmākara story. The debate about gender he felt was contemporary and fleeting. Of course, he had the final say for his translation.

I feel it’s time for change. After digging deeper, I feel more strongly. A caveat—I’m no scholar and the standards academics must follow are far higher than mine. Nevertheless, hear me out.

Curiously, according to the Lakkhana Sutta, of the “32 Marks of a Buddha,” number 10, depending on translation, says the male organ is hidden in a cavity. This implies “both male and female” or  “neither male nor female.”

In India, Avalokiteśvara is seen as male. In China, Avalokiteśvara, called Guanyin, is depicted as female and commonly called the “goddess of mercy.” In Japan, this figure, called “Kannon,” appears with androgynous features.

The Lotus Sutra describes Avalokiteśvara in various ways, including “wealthy man,” “monk,” “nun,” “layman,” laywoman,” “wife,” and “boy or girl.” This implies the bodhisattva of compassion takes whatever form necessary to help people.

In Buddhist art, both Mahāsthāmaprāpta and Avalokiteśvara manifest both female and male features with gender neutral characteristics, such as slender bodies, smooth skin, and refined facial features, as well as jewelry and clothing, best described as “unisex.”

Early Pure Land Buddhism depicted Amida Buddha in a triad, standing between the two bodhisattvas. In Jodo Shinshu, this triad folded into a single figure, Amida, embodying virtues of both bodhisattvas—wisdom and compassion—arguably inheriting both their female and male characteristics. Therefore in my view, Amida became “neither male nor female.”

The logic of “both” and “neither” reflects what Shakyamuni Buddha said in the Majjhima Nikāya, “This is, that is,” and “This isn’t, that isn’t.” The Buddha was describing “dependent co-arising” (pratītyasamutpāda), interdependence, meaning simply “you can’t have one without the other.” As the logic goes, males exist because females exist. Likewise, there can be no males without females, and vice versa.

The great Buddhist teacher Nāgārjuna (ca 150-250 CE) clarified and expanded this view. In his Mūlamadhyamakakārikā (Fundamental Wisdom on the Middle Way), he says the Buddha counseled against thinking “it is” or “it is not.”

To say ‘it is’ is to be attached to essentialism. To say ‘it is not’ is to lapse into nihilism. Therefore, judgements of ‘it is’ or ‘it is not’ are not made by the wise.

Of course, we live in a world of societal norms and laws, where for example, we must distinguish between men and women, just as we must make the distinction between night and day, life and death. This is the world of conventional truth and “duality.”

Nāgārjuna explained two types of truth— “conventional truth” and “ultimate truth.” To truly understand life, one must understand this distinction.

Conventional truth refers to everyday truths, such as, “Today, the sun is shining.” However, this truth is conditional and ever changing. “Ultimate truth” refers to universal truths that always are true. For example, “Weather is impermanent and always changing.” Buddha dharma means ultimate truth.

According to the Larger Sutra, all buddhas—past, present, and future—praise Amida’s name, meaning all become One with Amida. Therefore, Amida embodies all buddhas.

If, when I attain Buddhahood, innumerable Buddhas in the land of the ten quarters should not all praise and glorify my Name, may I not attain perfect Enlightenment.

The light of Amitāyus shines brilliantly, illuminating all the Buddha-lands of the ten quarters… All the Buddhas, śrāvakas, pratyekabuddhas and bodhisattvas praise and glorify it in the same way…

All Buddhas, Tathāgatas, in the ten quarters, as numerous as the sands of the River Ganges, together praise the inconceivable, supernal virtue of Amitāyus.

Perhaps that’s an argument for “they” as a pronoun for Amida, but I won’t go there.

Whatever the case, Amida represents infinite wisdom (light) and infinite compassion (life) that shine on all sentient beings. This Light and Life have no gender, no duality, and are not divided between male and female. That’s why I think Amida Buddha is truly nonbinary.