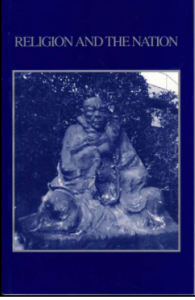 What does Jodo Shinshu say about social and political activism? An important question amid today’s social unrest.

Buddhists sometimes are criticized for being passive and uninvolved, too focused on their own personal enlightenment. But according to Rev. Junshō Tamamitsu, a Higashi Honganji teacher focused on activism, Jodo Shinshu urges us to look outward and face society’s problems.

In Buddhism, he said: “we’re encouraged to ask ourselves ‘Who am I?’ This process of self-reflection is not enough because we separate ‘self’ from ‘society.’ This ‘self’ must include our historical and cultural background. It must deal with social responsibilities of the self. In this way, spirituality not only brings psychological relief, but universal awareness.”

He added: “Nembutsu followers have dual nationalities—their spiritual home in the Pure Land and the nation in which they live. That’s why there’s tension between religion and the social system. If one thinks nothing is wrong with the social system, there’s no need for Jodo Shinshu.”

Rev. Tamamitsu’s words come from a 2002 talk in Honolulu, Hawaii, but his thoughts ring true today. Born in 1943, he was active in social issues, such as fighting discrimination against leprosy sufferers—who historically were treated as outcasts—opposing capital punishment, and questioning the validity of organ transplants. He was Higashi Honganji’s Shin Buddhist Research Studies director, and priest of Kōmyōji temple in Hyogo, Japan. His talk was translated from Japanese to English and published as a booklet called “Religion and Nation.”

Rev. Tamamitsu felt Shinran Shonin’s works and other Jodo Shinshu writings were a call to action. He said, “True spirituality is lost when religion is viewed only as providing psychological peace. We must recognize the importance of history, which transcends time and space. When Rennyo writes ‘the afterlife is the most important matter,’ he’s connecting the past, present and future, for which we all share responsibility.”

The Tannisho echoes this view, he said, showing how we’re all directly or indirectly connected to what’s happening in the world. In the Tannisho, Shinran states:

“Know that every evil act done—even as slight as a particle on the tip of a strand of rabbit’s fur or sheep’s wool—has its cause in past karma.”

Conversely, closing ourselves off from the world makes us self-obsessed and isolated. Shinran’s text, Kyogyoshinsho, states:

“As the time of kalpa-defilement advances,

Their evil and wrongdoing amid the five defilements increase,

So that their minds are like poisonous snakes and evil dragons.”

Shinran writes of the “great bodhi-mind” (dai-bodaishin), which is the mind that breaks out of self-closure, connecting us more to the world, Rev. Tamamitsu said.

“Jodo Shinshu is a religion of inter-relationships,” he said. “Consequently, what we say to others, reflects on us through the reaction of others. In Shinshu, this action and reaction reflects the teaching of ōsō and gensō (going and returning). This kind of two-way ‘dialogue’ means being open, sharing what one thinks, and listening to others. By contrast, a ‘monologue’ is one-sided. When you merely justify your views, judging what’s good and evil appears, then dialogue collapses.”

Traditionally, the Buddhist Sangha referred to a community of monks, sharing the same ideas. This represents a “closed” group. In Jodo Shinshu, sangha means each person is an independent thinker, relating to others, freely and openly, according to Rev. Tamamitsu. In this “open” network, each member is free to engage in dialogue with all. No one is excluded.

Jodo Shinshu encourages us to become independent in this way. Shinran, who lived during a time of religious persecution, class discrimination, poverty and civil war, declared his independence.

Addressing the social turmoil and persecution he faced, he wrote in the Kyogyoshinsho:

“The emperor and his ministers, acting against the dharma and violating human rectitude, became enraged and embittered. As a result, Master Genkū—the eminent founder who had enabled the true essence of the Pure Land way to spread vigorously [in Japan]—and a number of his followers, without receiving any deliberation of their [alleged] crimes, were summarily sentenced to death or were dispossessed of their monkhood, given [secular] names, and consigned to distant banishment. I was among the latter. Hence, I am now neither a monk nor one in worldly life. For this reason, I have taken the term Toku [“stubble-haired”] as my name.

Living during a time of discrimination by class, birth, wealth, power and education, Shinran saw everyone as equal. He found guidance in the Larger Sutra on the Buddha of Infinite Light. In this sutra, which most influenced Shinran’s thought, Dharmakara makes 48 vows to help sentient beings. The third and fourth Vows state:

“May I not gain possession of perfect awakening if, once I have attained Buddhahood, the humans and gods in my land are not all the color of genuine gold. “

“May I not gain possession of perfect awakening if, once I have attained Buddhahood, the humans and gods in my land are not the same in their appearance and are either beautiful or ugly.”

“It is as if sunlight is seen through a prism, in which there are various colors.”

“Light is the symbol of unity and color is that of differences.”

Here the color gold doesn’t mean everyone is the same, but rather, represents the preciousness of each person’s life, according to Rev. Tamamitsu. By contrast the fourth vow states that humans who should be the same in their appearance, neither beautiful or ugly, which means we should not discriminate, but treat everyone equally. To judge and discriminate is the working of the selfish mind, which separates “me” from “others.”

Elsewhere in the Kyogyoshinsho, Shinran quotes Pure Land master T’an-luan, who explains that despite our differences, we share this life with all others, and therefore can all our brothers and sisters:

“In this world of miscellaneous modes of births, whether beings are born from womb, egg, or moisture or by sudden metamorphosis, their fellow beings are numerous, and these fellow beings experience pain and pleasure in a myriad variations because of their diverse karma. In that land of happiness, every single being is born transformed from the pure lotus of Amida Tathagata’s perfect enlightenment, for they are the same in practicing the nembutsu and follow no other way. This extends even to this world, so that all nembutsu practicers within the four seas are brothers and sisters. The fellow beings are innumerable. How can this be conceived?”

In this way, we may accept our differences while treating all equally. Thus, Higashi Honganji’s Theme in 1998 was “Living Together in Diversity, Learning to Accept our Differences.” Even within families, each person must be recognized individuals, who are different yet come together. This constitutes a true human family.”

When considering our standing as a nation, Rev. Tamamitsu cites Shinran’s teacher Honen, who said:

“Honen said the three things one must eliminate to become a monk are feeling superior towards others through competition, wealth and power. Unfortunately, these three have become standards in our daily life. It’s human nature and this feeling prevails in politics and the economy,  influencing culture and military decisions. It’s often justified as “justice” or with religious ideology,

However, when judging others based on justice, we cannot see ourselves clearly due to our karmic conditions which affect our behavior.

For example, when terrorists kill, people see themselves either as those who “kill,” or those who are “killed” or who might be killed. Governments exact justice by killing the terrorists. Many people passively do nothing as long as they feel unaffected.

However, Rev. Tamamitsu said, “If we merely take an attitude of indifference, it already means we take the side of those who kill.” In Buddhism, he said “onlookers” are called “chikushō” (domesticated animals such as cows and pigs) who have neither shame nor self-reproach, according to the Nirvana Sutra. These people are “domesticated” by someone else.

He warns of being fixed in our views. Birth in Amida’s Pure Land does not mean attaining eternal bliss. That idealistic view is a static state where’s there no longer growth.

To be born in Amida’s Pure Land means “continuous spiritual liberation in the present moment.” “Thus, Jodo Shinshu is not a religion aimed at achieving enlightenment for oneself… because we realize our limitations.”

“Ordinarily, once we achieve our goal, we become complacent and no longer progress. By deepening our understanding through Jodo Shinshu, we keep rediscovering ourselves and encounter new situations every day. This is the meaning of “attaining birth.”

Before Shakyamuni Buddha passed away he advised disciples not depend on others for one’s spiritual understanding, but rather to be “a light unto oneself,” guided by the Dharma. This means continually listening to the Dharma and examining ourselves daily, Rev. Tamamitsu explained. Unless we become independent thinkers, we’ll always rely on others.

He said if your thoughts about a certain problem you face are the same as three years ago, you haven’t done any real “reflecting.” Learning about yourself is different from accumulating knowledge. Even if you feel you understand, it’s hard to apply to life. If you can, then true learning becomes exciting. “It’s about rediscovering oneself, rather than meeting the same self that hasn’t changed for three years. One encounters a new self each day.”

“Instead of studying Buddhism by just reading books and listening to lectures, it’s more important for each one of us to reflect on what shinjin or nembutsu means. Meet other people and exchange ideas. That’s how we keep learning and reach new levels of understanding.”

Rev. Tamamitsu warned against a trend of  “secularizing” Buddhist words and creating new terminology which dilutes their religious meaning. For example, “sentient beings” means all living things, a term meant to raise awareness of how we share life with animals, insects, plants and innumerable forms of life. More recently, this term has been interpreted to mean only human beings, which placed human life above other life forms. This way of thinking, for example, enables people to justify dumping chemicals into rivers and lakes, polluting them and poisoning fish and others creatures.

Likewise, certain social groups are prioritized over others, devaluing the elderly over the young. Jodo Shinshu teachings tell us all lives are equally precious.

“I think reflecting of the Pure Land provide us with a principle not only to be introspective but also to question everything, including the social system of each nation. Jodo Shinshu teachings liberate us continuously from nationalism and absolute ideas.

“…since the prohibition of the nembutsu (in the past) led to the arising of disturbances in society, on this occasion I hope that everyone will, deeply entrusting themselves to the nembutsu and firmly embracing prayers (for peace in the world) in their hearts, together say the nembutsu.”