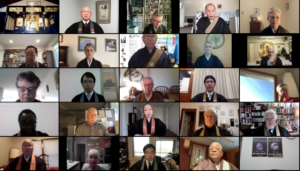 Buddhists leaders in Northern California have banded together to help tackle some of the world’s most pressing problems. They’ve adopted goals set by the United Nations and plan to urge their members to take action.

Representing various sects and denomination, including Jodo Shinshu, Zen, and Nichiren Buddhism, some 45 ministers and priests held an online Zoom forum last week to discuss their focus on the U.N.’s “Sustainable Development Goals” (SDGs), which aim to improve life across the planet by taking such action as eliminating hunger and poverty, promoting education and clean energy, reducing inequities, and addressing climate change. Although lofty goals, they said working towards the world’s biggest challenges requires action now.

“Buddhism can be called a teaching of action,” said Rev. Konjin Godwin, Soto Zen Buddhism International Center director and Abbott of the Houston Zen Center. “We are committed to understanding all of our karma: past, present and future. The task before us is enormous—to heal the earth and all of its beings.”

Buddhist leaders recently formed an alliance to work together. In a statement, they announced: “We, the Soto Zen, Shinshu Otani-ha and Jodo Shinshu Hongwanji-ha International Centers in the Bay Area have created a group called the Bay Area Buddhist Association… We hope that through this project, ministers and assistants from each sect will learn about Buddhism and the SDGs from each other in lectures and roundtable discussions so they can share it with students and members. We would like everyone to be able to use what they learn about Buddhism and the SDGs in their everyday lives.”

During the forum, Bishop Noriaki Ito of Higashi Honganji (Shinshu Otani-ha) North America said: “It’s important that we as Buddhists get involved. We are all in this together. Buddhism teaches that we all are interdependent. We are part of the greater global family.”

At a UN summit held in September 2015, member countries identified 17 goals and voted unanimously to make them international objectives to achieve by the year 2030. They envisioned government agencies of each country, as well as business and nonprofit organizations, working towards the happiness of all people and protecting the environment.

In November 2018 at the 29th World Buddhist Conference in Japan, 500 participants adopted the “Tokyo Declaration 2018.” Rev. Ryubun Kamada, chairman of the Japan Buddhist Federation, announced that Buddhists from around the world would support the UN’s goals.

The overall mission is to create a society in which “no one is left behind.” SDGs are comprised of the most critical issues which urgently need to be addressed, such as “poverty and hunger,” “inequality,” “environmental conservation,” and “the realization of a peaceful society.”

Here are the 17 Sustainable Development Goals identified by the U.N.:

Participants at last week’s forum talked about how people can make a difference through their own actions and influencing others. The Buddhist teachings, especially regarding interconnectedness and interdependence, provide a strong foundation for the mindset necessary to work towards these goals and making them a priority.

Bishop Marvin Harada of Nishi Honganji’s Buddhist Churches of America said it’s important to first reflect on one’s own behavior and thinking before taking action. “What we do as Buddhists is reflect on the dharma, practice the dharma, and share the dharma,” he said. Citing Institute of Buddhist Studies professor Takashi Miyaji’s example, he said it’s similar to being on an airplane and putting an oxygen mask on yourself first before you can help others.

Some participants talked about what their organizations are already doing, such as helping the homeless, volunteering in soup kitchens and food banks and participating in protests against inequality and racism. However much more could be done and organizations need to make more of a concerted effort to communicate the message to members and create activities that support the goals.

However talking with people about such priorities and goals can be difficult. “I feel there’s a disconnect in people who follow the dharma, but who don’t put those teachings into action,” said a participant. “Besides, any action we take can just seem like a band-aid.”

Another issue discussed was how the Buddhist tradition sometimes seems at odds with social work. For example, Buddhist monks purposely live simple lives with few possessions, but by society’s standards, may seem equivalent to being poor. Consequently, greater value is placed by Buddhists on helping people find spiritual peace and awakening, rather than providing material needs. Nevertheless, charity and social work have long been part of the Buddhist tradition.

Another participant mentioned how in Pure Land Buddhism, there’s a story of Amida Buddha, the Buddha of infinite wisdom and compassion. Before becoming a Buddha, Amida’s teacher told of how a great treasure lay at the bottom of the ocean, but to find it, all of the ocean’s water must be scooped out with a small ladle. Accepting this task gave Amida infinite patience and perseverance, unlike humans, who want an immediate payoff and who will easily give up. We can find strength to tackle the world’s great problems in this story.

“These challenges don’t resonate with some people, who think they are other people’s problems,” said Rev. Taiga Ito, assistant director of the Soto Zen Buddhism International Center in San Mateo, California. “That’s a shame. We have only 10 years to work towards these goals. We should think of these years as a time of action. We need to take action now.”

Bay Area Buddhist Association may be contacted at sdgsbayarea@gmail.com