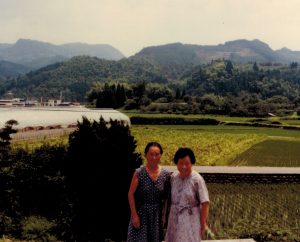 If you have neighbors you don’t know and to whom you never speak, you’re not alone.  It’s a sign of a common societal problem that can affect us emotionally, socially and spiritually.

Disintegrating communal ties makes us feel disconnected, creates stress and unhappiness, and at worse leads to neurosis and suicide. They can also lead to the elderly dying alone and youths becoming shut-ins at home.

These trends were documented in a report by Toshihide Shun’ei Hakamata, a Zen priest, written for The Eastern Buddhist, an academic journal published in 2013 by Higashi Honganji’s Otani University. The article is titled, “From a Disconnected Society to an Interconnected Society,” translated into English from Japanese by Jonathan S. Watts. Although the article was published a few years ago, his findings give us much insight about our world today.

In Hakamata’s home prefecture of Akita in northern Japan, the suicide rate rose over the past few decades, zooming above the national average. He and other Buddhist priests wanted to combat the trend, but first needed to understand the problem.

Prior to the 1960s, Akita’s suicide rate was below average. Most residents were farmers who, without machinery, freely helped neighbors, taking turns tilling and planting each other’s fields, and forming strong social ties. For example, they knew when families had babies, someone was sick, or when someone died, each time pitching in with food, clothing or labor.

Hakamata wrote, ‘“Someone has just died in this house’; ‘A baby has been born in that house’; ‘The breadwinner in that house has fallen ill’; ‘That old woman has become senile and needs looking after.’ In times like these, people in the community would make food and bring it over or help with the farm work. This was just natural or normal, and this is what was called shigoto. Shigoto was the ‘work’ of the community, and it was a duty.”

Later, mechanization allowed farmers to quickly complete their work and till their own fields without their neighbors’ help. With the extra time gained, they commuted to outlying farms to work and earn more money. Making money was called “kasegi” in Japanese. On train rides home, they’d get drunk on cheap sake. Eventually, people began feeling frustrated and depressed.

According to Hakamata, “Each household now uses machinery and works their rice paddies by themselves. In the past, a household could not farm without the help of others in planting, weeding, and harvesting. However, this kind of cooperative work has all but been lost. In this present situation of individual households doing their own agricultural work, the population continues to age and decrease, while the community stops noticing what is going on with its individual members.”

From the mid-1960s, Japan embarked on a campaign to become a world economic power. Young people moved from the countryside to cities in search of higher paying jobs. Their primary obligation became their jobs and companies, while family and friends dropped in importance. Making money became all-consuming, allowing them to buy things and satisfy personal desires. Likewise, people paid for childcare for the young, nurses for the sick, and assistants for the elderly. People no longer had time for such things. The word “shigoto” became associated with the priority company jobs took over community life, Hakamata wrote.

This “depopulation” trend—shrinking numbers of people living in rural areas—also affects Buddhist temples as they struggle to survive amid sinking membership, according to Hakamata.

In Hakamata’s village, an overwhelming number of residents were elderly, many living alone on tiny incomes. Dying alone had become commonplace, unheard in the past, when grandparents were surrounded by children, grandchildren and friends. Suicide became a way out.

Hakamata writes, “for the elderly who get sick, basically every household now uses a nursing service. In any event, almost everyone uses either day-care services for the elderly in their households or leaves them with specialists at nursing facilities. For some time now, Japan has had a system of care entirely by professionals. It seems that families have basically stopped taking care of their elderly members.”

A phenomenon known as “hiki-komori” also became prevalent, referring to a working age group—eighteen to fifty-five years old—who drop out of society, staying at home in their rooms without jobs, school or friends. Hakamata was surprised to discover more than 100 such people in the village.

Such isolation wasn’t possible in past agriculture communities. From an early age, young people helped in family fields and in their neighbor’s, naturally fostering interaction with many people. There was little privacy, due to shared sleeping quarters and living space.

Taking a lesson from the past, the priests confronting the suicide problem hoped to build stronger social ties by starting a community café, encouraging residents to drop by, relax, drink coffee, and to chat with each other. The café became a kind of community center, which seemed to help counter the suicide rate, resulting in no suicides the following year.

However, five suicides subsequently occurred, all by men, so the priests opened a kind of community bar, where men could drink and share their problems.

Hakamata concluded his essay by explaining modern society may make life easier and more efficient, but the cost is isolation and disintegration of social relationships. Many people want to avoid these “entanglements,” thinking they cause conflict and difficulties, but Hakamata believes they force us to set aside selfish desires for a greater good, actually helping us mature into better human beings.

This story reminds me why the Buddha emphasized “sangha” as one of the “Three Treasures.” Sangha means community, which is where we learn to work together, to temper our desires, to solve conflicts, to enjoy friendships, to understand interdependence and ultimately to realize Oneness. Feeling a sense of sangha really is important.

In our world today, it’s hard to feel a sense of community. Fortunately, our temples are places where we can feel a sense of connection with others, enjoy friendships, share experiences, work together, bicker, overcome differences and realize our interdependence. There are groups for children, teenagers, young adults, parents and seniors. Strengthening our bonds through sangha is precious.

Hakamata’s observation sheds much light on challenges we face in our society today. In the United States especially, we tend to prize our independence, freedom and self-reliance the most, while sacrificing ties to family, friends, and community, seeing them more as trouble rather than benefit. But our ties to each other—“entanglements” (which imply effort and challenges)—are what really lead us to a life fulfilled.

Rev. Ken Yamada is editor of Shinshu Center of America