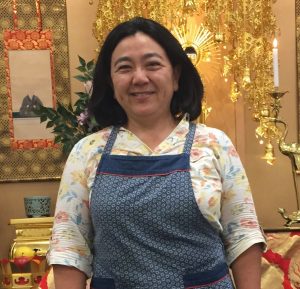 Reiko Ikehara Nelson first encountered the Shinshu teachers when her father passed away, more than two decades ago.

At his funeral, she heard a reading of “White Ashes,” a letter written 600 years ago by Honganji abbot Rennyo Shonin that is traditionally read at funeral services. Rennyo writes about impermanence, how a person may have a healthy face in the morning, but suddenly may die and become “white ashes” (cremated) in the evening. The service was held at the Los Angeles Betsuin temple.

Several years later in 2008, Reiko’s husband Ken suddenly passed away. He had been diagnosed with a pituitary tumor, had surgery, but never awoke. Earlier, he seemed healthy, so his passing came as a shock.

Afterwards, she felt sad and desperate. Reiko had been together with her husband for more than 20 years. Consequently, she tried different religions and heard what they had to say. She visited West Covina Higashi Honganji, which was near her home. There, she once again encountered “White Ashes.” This time, Rennyo’s words struck in her a deep chord.

“I couldn’t easily accept the truth of impermanence,” she said. “As I continued to reflect on that letter, it began to resonate with my experience. As I went to the temple, I became aware that I was a person who wasn’t living in the present. I was lost thinking about the past.”

As she listened to Shinshu teachings, she began to feel grateful for her life. “I am alive now,” she said. Whatever happens, she feels she can appreciate this life.

These days, Reiko goes to the temple with her niece Michelle to listen to the Buddhist dharma. Michelle has been participating in the temple’s “Dharma Seeds” program, which encourages people to become more active in temple activities, share their experiences and possibly become future leaders.

“First, we ‘knocked’ on the temple gates to encounter the teachings,” she said. “Now we want to open those gates to other people.”