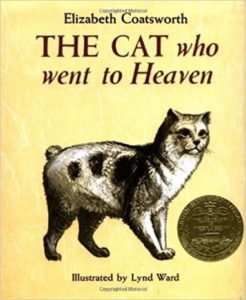 For an easy-to-understand book about the Buddha, I recommend “The Cat who went to Heaven” by Elizabeth Coatsworth.

I first read this book when I was a child, maybe 10 or 11 years old. The librarian recommended it and I remember it had brilliant illustrations and a gold seal on the cover.

The book won the John Newbery Medal for most distinguished contribution to American literature for children, and the Caldecott Award for best illustrated children’s book.

Based on a retelling of old Japanese folktales, this story whisks you away to a foreign land and time. In olden times, a poor artist and his housekeeper were barely keeping their lives going. One day the housekeeper, an elderly woman with the kindest of hearts, went to buy food, but instead brought home a small kitten that she fell in love with. The artist was unhappy, but seeing how the cat made his housekeeper happy, he reconsidered. Perhaps the cat might change their luck, so they named her “Good Fortune.”

Over the following days, Good Fortune showed herself to be a gentle and loving cat. The artist saw her catch a bird, then let it go. The artist began to learn from the cat, admiring her more and more. Then their luck changed.

The village Buddhist temple commissioned the artist to draw a great wall painting depicting the final days of the Buddha’s life, before he passed into “Parinirvana.” The scene traditionally shows the Buddha surrounded by, not only his disciples, but also many kinds of animals, including an elephant, tiger, monkey, stag, deer, and even, a dog. The Buddha had told stories featuring these animals. But there was one animal that could never be painted in such a work—the cat. According to legend, the cat refused to seek guidance from the Buddha and was never blessed. Consequently, cats were considered a creature of Mara, the Devil, and were forever cursed.

The artist starts painting the Buddha and drawing various animals. Each day, Good Fortune comes over and gazes at the picture. She cannot tear her eyes away. As each animal is drawn, a story is told of that animal in light of the Buddha’s life and wisdom. At the end of each day, Good Fortune looks at the artist, and from her eyes, seems to beg the artist to paint her into the scene.

With each lesson told, the Housekeeper recites a short poem describing her hopes and fears for the artist and the cat. These are poignant poems of simplicity and great feeling. And so, the story goes.

I won’t spoil the ending, but suffice it to say there’s a cat-astrophe (pardon the pun).

The story by turns is heartfelt and bittersweet. Ultimately joy overwhelms all views and actions. To me, this story about an artist became Art. This was my first encounter with the Buddha and has stayed with me ever since, making me forever grateful.

Think of the book’s name, “The Cat who went to Heaven,” and you may think, “There’s no heaven in Buddhism.” Is this a Christian book? Well, there are heavenly realms in Buddhism, as well as demons, ghosts, animals, and even, humans. There’s not much of a Christian kind of heaven in the story.

From my Pure Land Buddhist perspective, the “entrusting heart,” so ably demonstrated by Good Fortune, indicates what Shinran calls birth in the Pure Land. This story is not about a future life but lives transformed here and now. Even a cursed cat may be a blessed in this way.

Check out the hardcover edition published by Simon and Schuster that has wonderful illustrations by Lynd Ward, which the paperback editions lack.

-Rev. Brenion is a Higashi Honganji minister in Southern California