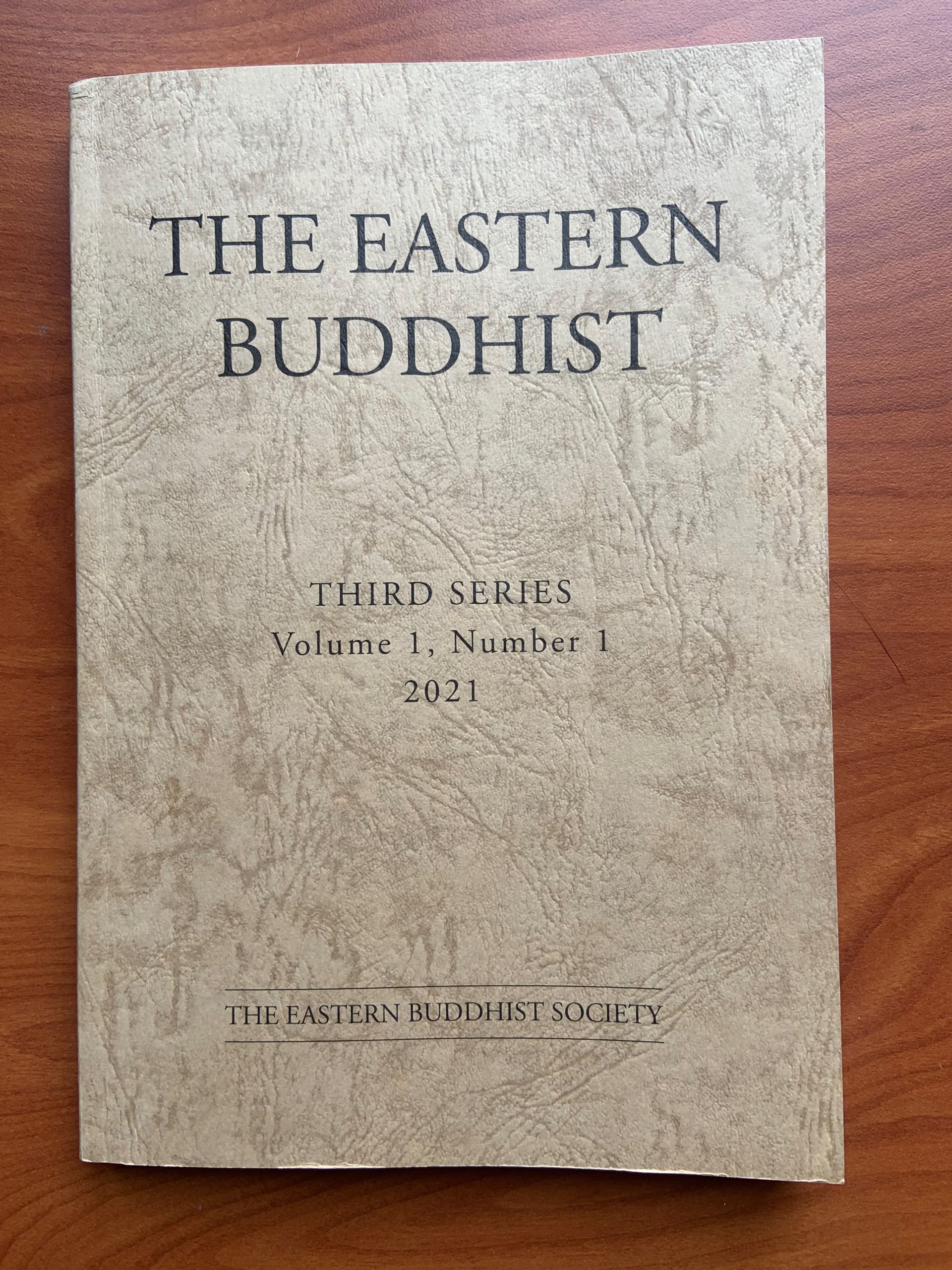 A century ago, Jodo Shinshu began transforming its image from beliefs in superstition and the supernatural towards teachings addressing modern day problems, bolstered by efforts of a new academic journal called The Eastern Buddhist. Today, the journal remains an active voice in English, clarifying Shinshu teachings, along with various other Buddhist traditions.

The journal was founded in 1921 by The Eastern Buddhist Society, led by Daisetsu (D.T.) Suzuki, his wife, Beatrice Lane Suzuki, Gesshō Sasaki, Chizen Akauma and Shūgaku Yamabe. It was based at Higashi Honganji’s Otani University in Kyoto, Japan.

At its launch, Japanese Buddhism was emerging from a period of repression and harsh criticism within Japan. Nativists promoted Shinto over Buddhism, which they perceived as foreign and out-of-touch with the times. In the West, scholars translated and studied Pali Buddhist texts based on Sakyamuni Buddha’s words, which they viewed as fundamental and authentic. To them, Mahayana Buddhism, with its mythical figures and fantastical stories, seemed like a bastardized offshoot.

“The Eastern Buddhist was established in part to legitimate Mahayana Buddhism in the face of these scholarly trends,” professor James Dobbins said in a speech commemorating the Journal’s 90th anniversary in 2011.  “It did so, however, not by criticizing early Buddhism, but by linking Mahayana to it and arguing that Mahayana actually fulfills its true goals. Needless to say, this type of argumentation was based not on historical linkages, but on essentialist thinking—that is, Mahayana was presented as the actualization of the essence of early Buddhism, and hence not in conflict with it.”

A major hurdle in Shinshu’s transformation was the image of its founder, Shinran Shonin, according to Dobbins. In pre-modern Japan, fantastical stories about him predominated, as well as the view that Shinran was a manifestation of Amida Buddha. Even today on the central altar of both mother temples of Higashi Honganji and Nishi Honganji, sits Shinran’s image, where normally Amida’s statue would stand.

The first official biography (Japanese: Godenshō) of Shinran, written by his great grandson Kakunyo (1270-1351), describes him as an incarnation of Amida Buddha. Later biographical stories expound tales of the supernatural. There’s a story of how Shinran’s mother, before he was born, slept facing the West while reflecting on impermanence. She dreams of a miraculous light enveloping her body and sees a vision of Bodhisattva Kannon bestowing her with a male child, which turns out to be Shinran.

Another story recounts how Shinran learns of a female spirit haunting a temple, where lays a grave of a mountain bandit. Shinran assures the ghost that even robbers and murderers are included in the Buddha’s compassion. He writes sutra passages on small stones and leaves them on the grave. A voice from the grave calls out that finally after 40 years, birth in the Pure Land is possible. In another story, Shinran encounters a huge snake, who says that in a past life, it was a greedy and angry wife. Shinran tells the snake to have faith in Amida. When the snake dies, it becomes a deity that flies away to the Pure Land. In yet another tale, Shinran meets hungry ghosts tormented by thirst. He teaches them Nenbutsu, reciting Amida’s name. A colorful cloud carries them away to the Pure Land.

These kinds of stories made Jodo Shinshu seem antiquated and out-of-step in the Meiji Period, when Japan emerged from two centuries of isolation. New ideas flooded into the country, including modern scholarship methodologies based on rational thinking, critical analysis and doctrinal research. Fairy tales and religious miracles no longer passed muster.

According to Dobbins, “Modern Western historiography was built on the rigorous examination of documentary evidence and critical investigation of historical claims. What this meant is that pre-modern historical narratives—for instance, miracle stories of religious institutions (engi 縁起) and hagiographic biographies of revered Buddhist figures—became the object of scrutiny and suspicion. This included the traditional biographies of Shinran, especially their descriptions of the spirit world, revelations in dreams, and miracles.”

During this time, even Shinran’s existence as a real person was questioned. Although this view was not widely held, doubters claimed reliable historical writings never mention Shinran, his actions weren’t authenticated, and that perhaps later generations invented him. In 1921, the discovery of letters written by Shinran’s wife Eshinni provided much needed historical documentation.

Moreover, it was a religious text, Tannishō (English: A Record in Lament of Divergences), that brought Shinran to life as a humble spiritual seeker. Noted Buddhist teacher Manshi Kiyozawa championed Tannishō as a source of inspiration, a cause furthered by his student Haya Akegarasu. The text quotes Shinran as saying he has nothing to teach, other than what he learned from his teacher Hōnen. He says Amida’s Primal Vow to save all sentient beings was made for him alone. “By shifting the spotlight away from his identity as a manifestation of Amida, it allowed Shinran to remain the central figure in a new type of Shin Buddhism,” Dobbins said. “He was transformed into a role model for religious living in the modern world.”

The Eastern Buddhist provided an important forum that advanced Shinran’s humanness, shifting his image away from a pre-modern miracle performing saint.

An editorial note in a 1922 journal issue states: “The interest the people take in [Shinran] lies principally in his humanness, and not always in his character as a religious leader or as the propagator of absolute “other-power” doctrine. Of course, his personality is inseparable from his leadership in a new religious movement. But the Japanese are at present regarding him as a character most human in the history of Buddhism in Japan. He was not a Buddhist saint as the term is generally understood. He was too richly endowed in human qualities to be such. He struggled hard against the stiff and inhuman conventionalism of the time. To assert his humanism was a most gigantic task in those days, but he was too true to himself to be a mere formal and lifeless follower of scholarly and ascetic Buddhism. He confessed his sinfulness and ignorance, left the orthodox school, and asserted his human weakness or rather virtues. This is what most appeals to the younger generations with modern education.”

Over the decades, The Eastern Buddhist contained essays on a wide range of topics, including studies of Indian, Chinese, Tibetan, Southeast Asian and Korean Buddhist texts, even French contributions, which were included in the 2017 issue (Francophone Buddhist Studies). Other topics include Buddhism related to social ethics and economics, as well as book reviews of new Buddhist publications. Jodo Shinshu and Zen Buddhism often are prominently featured, given the background of the founding editors. Essays and thoughts on innovative Shinshu thinkers such as Kiyozawa, Akegarasu, Ryojin Soga and Daiei Kaneko also frequently appear.

Several of the journal’s articles appear in book form, published in recent years as the “Eastern Buddhist Voices” series , edited by Michael Pye. Titles include “Beyond Meditation,” “Lay Buddhism and Spirituality,” and “Listening to Shin Buddhism.”

In the forward of The Eastern Buddhist’s first issue, Suzuki wrote: “The Society has for its objects the study of Buddhism, the publication of the result of such study, and the propagation of the true spirit of Buddhism.” Suzuki passed away in 1966 at age 96. Other editors included Keiji Nishitani (1900-1990), Masao Abe (1915-2006), Gajin Nagao (1907-2005), and Shin’ya Yasutomi (1944-2017). Advisors include Buddhist scholars across the world. The most current issue editor is Robert Rhodes.

In the latest issue (2021), Rhodes wrote: “Looking back on the history of The Eastern Buddhist, it is possible to say that the goal of the original founders—to dispel the then widespread notion that Mahayana Buddhism is a degenerate form of Buddhism fraught with superstition—has been achieved. No one would now deny that the Mahayana is a legitimate, and indeed a vibrant, form of Buddhism—though sadly, like all other religious traditions, it frequently fails to live up to its lofty ideals. However, this does not mean that the role to be played by The Eastern Buddhist has disappeared, since there are still many aspects of Buddhism in need of further investigation.”

Rhodes wrote: “The problems generated by human self-centeredness and its concomitant unbridled technological manipulation of the world remain as serious and tenacious as ever. Indeed, with the rapid growth of new technologies (such as new digital forms of communication like the Internet, genetic engineering, and artificial intelligence) and increasing globalism, they have only been exacerbated. We are convinced that the Buddhist tradition, with its emphasis on selflessness (and the radical critique of craving that it entails), emptiness, and interdependence, has much to offer in suggesting solutions to these intractable problems, and we hope that The Eastern Buddhist may serve as a medium for airing possible approaches to overcoming them.”