Perhaps the scariest creature you may find in a Jodo Shinshu temple is the dragon.

Dragons often adorn the sides of large incense burners in our temples. In Asia, you’ll find dragons crawling up pillars, on walls, and even on rooftops. But these creatures don’t mean you harm. They symbolize protectors of the Buddha and Dharma, the Buddhist teachings.

This symbolism goes back to Shakyamuni Buddha’s time in India, more than 2,500 years ago. According to legend, after the Buddha attained enlightenment, he continued to sit in meditation for a total of seven weeks. During the sixth week, a huge storm broke, pouring rain down on him. Seeing this, Mucalinda the serpent king, arose from the ground and with its back, covered the Buddha like a giant umbrella. 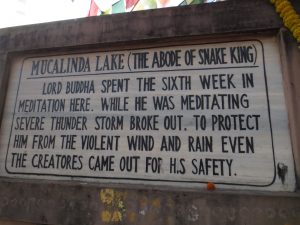 In this way, giant serpents were seen as protectors of the dharma, the truth that liberates us, standing strong against any attack. In China, giant snakes were mostly unknown, but artists imagined them as dragons. In Chinese culture, dragons have come to represent, good luck, good fortune, power, authority, the Emperor, and even, the Chinese people. You’ll find them in palaces, gardens, tombs, buildings, boats and even atop temples.

Not all depictions of serpents in Buddhism are positive. In the “Three Poisons” of human nature, anger is symbolized by the snake, along with greed (rooster) and ignorance (pig). In Tibetan Buddhism’s “Wheel of Life” mandala, these three creatures lie at the wheel’s center.

Each of us, in outward bearing,

Makes a show of being wise, good, and dedicated;

But so great are our greed, anger, perversity, and deceit,

That we are filled with all forms of malice and cunning.

Extremely difficult is it to put an end to our evil nature;

The mind is like a venomous snake or scorpion.

Next time you visit a temple, please notice the dragon and think what it means to you.