This month we celebrate the Buddha’s birthday, called “Hanamatsuri” (flower festival). He is honored as the founder of the Buddhist teachings. In Jodo Shinshu, however, his birth has another meaning.

According to tradition, immediately after the baby Buddha was born, he took seven steps and proclaimed, “I, alone, am the noble one.” This act has been interpreted different ways, foremost symbolizing the Buddha as a great teacher with supreme wisdom. 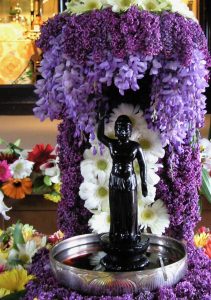 Subsequently, Shakyamuni Buddha, or Gautama Buddha, as he was called, gave us various teachings such as the Four Noble Truths, the Eightfold Path, the truths of Impermanence and Interdependence and so forth. His teachings spread and evolved over time, resulting in different forms of Buddhism, such as Theravada, Mahayana and Vajrayana, and different traditions.

But according to Shinran Shonin, the most important reason why the Buddha was born was to tell us about Amida Buddha’s vow to help all sentient beings and about Nembutsu and reciting Amida’s name. Our tradition, Jodo Shinshu Buddhism, is based on Shinran’s teachings.

For Shinran, the teachings of Amida’s “original vow” are the most important. Because of this vow, everyone has an innermost aspiration to awaken to the true meaning of their life. This means that all of us have the potential to attain spiritual awakening in this life. The vow makes spiritual awakening accessible to all people, regardless of age, education, wealth, status, gender and so forth.

Shinran cites the Larger Sutra on the Buddha of Infinite Life as proof. In the sutra, Shakyamuni tells the story of how the monk Dharmakara became Amida Buddha.

In his text Kyōgyōshinshō, Shinran asks, “How do we know that Śākyamuni’s appearance in the world was the great event [whereby we are informed about Amida Nyorai and his Prayer]?”

Just before telling the story of Amida, the Buddha was asked a question by his attendant Ananda. Shinran highlights this exchange between Ananda and Shakyamuni recorded in the Larger Sutra.

Ananda, who had listened to Shakyamuni’s teachings for many years, was one day astonished at Shakyamuni’s extraordinary appearance; Shakyamuni was radiating immeasurable light. Ananda sensed that the Buddha was intending to explain his real cause for coming into this world.

Ananda praised the Buddha: “Today we find joy and contentment revealed in every sense organ of the World-honored One. Your expressions are clear and pure. Your face shines in dignity like a bright mirror in which the reflections are transparently manifest. Today your commanding features, radiant and wonderful beyond words, infinitely surpass anything we have seen before…”

The Buddha asked Ananda, “Do you owe it to the devas that you ask me this question? Or does it come out of your own wisdom—this question of yours in regard to my dignified features?”

Ānanda answered, “I owe nothing to the devas; it is my own asking, out of my own point of view, O World-honored One.”

The Buddha said, “Well done, O Ananda. Your question pleases me very much.”

Then the Buddha began telling the story of Amida by saying, “Ananda, listen carefully, I shall now expound the Dharma.”

To which, Ananda replied, “With joy in my heart, I will listen.”

To Shinran, these words between teacher and disciple, signify that the Buddha is explaining the most important teaching. Shinran says: “…Shakyamuni… made his appearance in this world in order to help all beings with the illuminating teaching of the truth through which they would be benefitted with things true and real.”

In his “Hymns on the Pure Land Patriarchs,” Shinran honors his direct teacher Hōnen Shonin, who taught him about Amida Buddha’s original vow:

Throughout countless lives over vast kalpas

From the cycle of birth-and-death.

If we did not encounter our primary teacher Genkū [Hōnen] on this occasion,

We would surely have passed the present round of existence in vain.

In the postscript of Kyōgyōshinshō, Shinran writes: “Thus in Kennin kanoto no tori (1201), I, Gutoku Shaku no Ran (Shinran), took refuge in the original vow and dispensed with all other practices. ”

For Shinran, the teaching of the Larger Sutra and the Nembutsu path are most important for spiritual awakening and understanding the importance and value of our life. Shakyamuni Buddha was born to give us this important teaching.

Thus, the baby Buddha taking seven steps and proclaiming “I, alone, am Noble” is our own proclamation that my life is precious. It is the birth of our own awakening to the preciousness of this life.

Different Buddhist traditions emphasize different aspects of the Buddha dharma. For example, some schools say the reason for the Buddha’s birth is to expound the Lotus Sutra.

For followers of Jodo Shinshu, the Buddha was born so we could hear the teachings of Nembutsu.

-Rev. Ken Yamada is editor at Shinshu Center of America

–Larger Sutra on the Buddha of Infinite Life