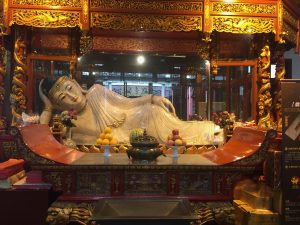 Traditionally, many people on February 15 observe Nirvana Day, the day when Shakyamuni Buddha passed away.

When we hear about the Buddha, we often think he was not like us, but rather someone more like a super human being. We should not forget he really was the same as you and me. He was born as a human being and he died as a human being.

What then is the difference between the Buddha and us? To me, he found peace of mind and had eyes that saw reality and truth. With those qualities, he lived a meaningful and profound life.

Our main goal in Buddhism is the same as Shakyamuni’s—to become a Buddha. This means becoming an awakened person and finding a deep peace of mind.

It is important to remember Shakyamuni was a spiritual teacher. In Jodo Shinshu, we walk the path of the Buddha through the Nembutsu teaching. We listen to the Buddha’s words and reflect on our lives so that our eyes open to truth.

Shakyamuni Buddha died at the age of 80 years. He shared his teachings with others for 45 years. When he realized he would soon die, he left Rajagriha, where he was staying, and began traveling to his hometown of Kapilavastu. This was his last journey. On the way, he stayed with some disciples in a town called Kushinagara, and received an offering of food from Chunda, a blacksmith. However, there was a poisonous mushroom in the food. Only the Buddha suffered from food poisoning. He lay beneath a Sala tree as his final resting place. It is said the cause of his death was old age and food poisoning.

The Buddha knew the cause of his sickness was food that Chunda offered. He also knew he would soon die. Before he died, he told his disciples, “Don’t accuse Chunda. His offering came from a pure mind and therefore it was right conduct.”

He said, “Don’t look only at the results of an event,” explaining that Chunda’s attitude in making the Buddha an offering represented a beautiful deed.

“Don’t accuse him,” was the Buddha’s last message to his followers and his attendant Ananda, a first cousin and one of his principal disciples. He then passed away.

In the Buddha’s last sermon, he had said, “Make the dharma your light! Rely upon it; do not depend upon anyone else.”

He also pointed out to Ananda that our world is constantly changing and not lasting—the essence of impermanence—so he urged his disciples to follow the Buddha dharma to gain salvation.

In his last message, the Buddha tells us we need two lights to illuminate our lives; one to see the world of reality, truth and the Dharma, and one to see our true selves.

When walking outside on a dark night, we need a flashlight to see. Since our world is constantly changing—just like our constantly moving minds—we cannot imagine what will happen in the next moment. We need to make a constant effort to listen to the Buddha’s teaching, which directs us to the world of awakening.

Our practice is hearing and calling the Buddha’s name with the words “Namu Amida Butsu.” By walking on this path called Nembutsu, we encounter the truth of the words the Buddha spoke in his last message.

-Rev. Kawawata is Bishop of the Higashi Honganji Hawaii District and  “rinban,” or head minister, of the Hawaii Betsuin temple.