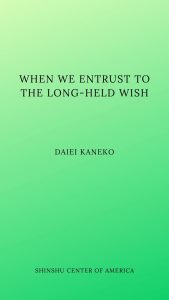 That mission was Higashi Honganji teacher Daiei Kaneko’s, just after World War II when U.S. troops occupied Japan. Perhaps Kaneko was best for the job. He based his approach on reasoning and analysis found more in Western philosophy than medieval religious belief. He effectively made a case for Shinshu’s relevance in modern times.

Kaneko delivered his talk in Tokyo before the Asiatic Society in 1948, which became an essay Shinshu ni tsuite in Selected Works of Kaneko Daiei (Japanese: Kaneko Daiei Senshu). Translated into English by Wayne Yokoyama, Shinshu Center of America recently published it as a short eBook called When We Entrust to the Long-held Wish.

Kaneko (1881-1976) once was considered a heretic and suspended from the priesthood, but later became regarded as an important and progressive Buddhist thinker, whose writings cast a modern understanding on Shinran Shonin’s teachings, which became Jodo Shinshu. Kaneko was a student of Rev. Manshi Kiyozawa, whose experiential and rational approach helped shape a modern interpretation of Shin Buddhism.

In Japan today, Shin Buddhism is a major Buddhist sect, however in the West, it suffers from misinterpretation and is weighed down by complex language and concepts. In When We Entrust to the Long-Held Wish, Kaneko explains why Shin Buddhism is the most accessible form of Buddhism and its relevance to our daily lives and contemporary world.

In the book he points out: “Often a spiritual journey begins by experiencing conditions of human suffering and pain. People without suffering are strangers to religion. Thus we say people free from suffering and complacent in their happy lives are actually spiritually unhappy because they never question the meaning of true happiness.”

As his starting point, Kaneko takes a statement from Shinran, “When we entrust ourselves to the Long-held Wish for us and call the Buddha’s name, we too will become Buddhas.” In this work, Kaneko explains the profound depth of this statement and the importance of Shin Buddhist teachings.

In 1927, the Higashi Honganji organization accused Kaneko of heresy, ultimately forcing him to resign as professor of the denomination’s Otani University. He was later invited back to the university and his writings today are studied and translated as a basis for a modern understanding of Shin Buddhism.

What landed Kaneko in hot water were his views influenced by Kiyozawa (1863-1903). As Robert Rhodes, summarized in his profile of Kaneko in the book Cultivating Spirituality: “Kiyozawa here understands Amida Buddha, not as an other-worldly supernatural being residing in a world far off to the west, but as the saving power that appears in the believer’s faith. The analogous point is made by Kaneko in his description of the Pure Land: It too is not an actual place located somewhere in the universe, but a spiritual reality that appears in faith.” According to his accusers, Kaneko’s view presents Pure Land as a mental projection, rather than the traditional explanation of Pure Land as a place.

The “long-held wish” refers to a vow made by Amida, the Buddha of Wisdom and Compassion, to save all beings who recite the Buddha’s name, according to the Larger Sutra on the Buddha of Immeasurable Life.

Kaneko writes, “Shin Buddhism may be summarized as follows: ‘When we entrust ourselves to the Long-held Wish for us and call the Buddha’s Name, we too will become Buddhas.’”

Tying Shinran’s teachings to today’s world, Kaneko addresses a fundamental human problem: “Buddhists do not believe true happiness can be achieved through material prosperity. True human happiness cannot be attained through the limited power of political and economic activity.”

He writes: “We watch helplessly as one war after another are fought in the name of peace. I wonder why? This may be linked to basic human nature — our maligned sense of love, anger, and hate from which we can never escape. This love-hate syndrome of man’s inner self outwardly manifests itself in factionalism and struggle.”

Moreover he writes, “People argue and fight fiercely for their own interests. When carefully scrutinizing various viewpoints, whatever side we take always has a dark shadow. Indeed, nothing is more savage than declaring, ‘I am right, you are wrong.’ By contrast, self-reflection leads to repentance that ultimately enriches inner spirituality. Therefore people should appreciate conditions allowing them to do good. Furthermore, people thinking their accomplishments are entirely their own should feel ashamed.”

Through this kind of deep introspection, Kaneko argues that reciting the Buddha’s name (also called nenbutsu) gives form to Amida’s promised wisdom and compassion. “When haunted by delusional thinking or troubled by love-hate relationships, we surely can turn our thoughts to the Buddha’s long-held wish for us. During those times, the Nenbutsu we recite liberates us from the despair of self-confession, while expressing gratitude, fostering inner strength and forging a sympathetic heart.”

This kind of self-reflection forms the basis of a compassionate and peaceful world. Kaneko concludes by proclaiming, “no society can build a strong foundation while ignoring this religion.”

(Rev. Yamada was an editor of When We Entrust to the Long-held Wish)