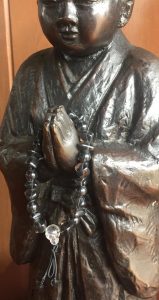 After service one day, a woman asked about O-nenju, Buddhist beads. Catholics use rosaries when they pray, she said, but how about Buddhists? What do Buddhist beads mean and what is their purpose?

A Buddhist string of beads commonly is called juzu or O-juzu (“O” is honorific in Japanese). In our Jodo Shinshu tradition, we usually refer to them as “O-nenju.” I would like to share the meaning of Onenju.

It’s generally understood we should carry O-nenju when attending Buddhist services. Perhaps you were told that bringing an Onenju to service is a rule of the temple, or required by our denomination or religion. In the past, I heard ministers and adults would tell children. “Don’t think about the reason, just bring it. It’s the correct way!”

Nowadays, I don’t like being blindly obedient, so I ask why things are a certain way. I don’t want to be forced to follow rules for no good reason. I think we always need to question why we do things. Questioning is very important.

The origin of prayer beads comes from ancient India. During Shakyamuni Buddha’s time, he also used prayer beads. According to a Buddhist sutra, a king asked the Buddha how to govern a country peacefully. The Buddha responded by teaching the king about using prayer beads to help him meditate on, think about, and recite the Three Treasures—the Buddha, Dharma, and Sangha. In that way, the king could calm his mind, see through his blind passions (Japanese: bonno), and govern the country peacefully. According to the sutra, prayer beads were for counting the number of times a person reflected on the Three Treasures. “Meditating,” “thinking,” and “reciting” together counted as one bead.

Over time, the use of prayer beads spread to China and Japan. Buddhist prayer beads became used for a variety of reasons, such as counting the number of times a mantra is recited, counting how many breaths are taken while meditating, the number of prostrations done, and how many times the Buddha’s name is recited. Generally, prayer beads are for counting something, so the string of beads was called juzu in Japan. Juzu means, “counting beads.”

If we don’t count the number of times we say Nenbutsu, then why carry O-nenju when attending Buddhist services?

I think there are two reasons. One is “proper attire;” the other is “attitude.”

Rennyo Shonin, considered the “second founder of Jodo Shinshu,” in the 15th Century wrote in a letter his observations of people visiting a temple: “…there is no one who even carries devotional beads. It is as if they grasped the Buddha directly with bare hands. The Master certainly never said that we should venerate the Buddha by discarding the beads.”

Regarding “attitude,” Rennyo Shonin said holding beads shows respect for the Buddha. This is the correct “attitude” when carrying beads. We are encouraged always to hold the beads when doing gassho, putting our hands in prayer position and reciting the Buddha’s name. We put the beads around our hands in gassho. We do this to express respect for others.

For example, when we put our hands together in gassho, it means, “I respect you and I don’t want to offend you.” By contrast for example, people who fight when boxing, or doing Judo or Karate, separate their hands to attack and defend.

Holding prayer beads means showing respect for the Buddha and other people. In Japan, my teacher taught me about human nature. He said generally we know about acting respectfully, but often forget and become careless. For example, when we first enter a Japanese-style room, we open the sliding door using both hands, which is proper. But as we get used to it, we’ll open the door with one hand. Finally without thinking, we may even open the door using a foot. This is what my teacher taught me about human nature again and again.

So what does the string of prayer beads mean? In Buddhism, each bead shows our blind passions or deluded mind such as The Three Poisons—greed, anger and ignorance. Therefore the meaning of holding the beads is to hold our blind passions.

However, there are various interpretations. Holding the beads helps us remember we are filled with blind passions. In our daily lives, we forget about our blind passions and we become self-centered, thinking only of our own, one-sided way. But the beads constantly tell us to be mindful.

Blind passions themselves are neither good nor bad. They are part of human nature. Blind passions can become treasures for us. Their value and quality may be transformed without any change in appearance. Each bead is linked by a string, symbolizing Amida Buddha’s deepest wish to make us understand great Truth.

The linked beads of Buddha’s wish encircle and tie our hands in gassho. That’s why we put O-nenju around our palms when doing gassho. O-nenju encourages us to live with a feeling of constant gassho. It tells us not to forget we are filled with blind passions.

O-nenju encourage us to keep putting our hands together, to deeply reflect on our true nature, to transcend our self-centeredness, and to connect to the greater Truth about life. Those are the reasons why we carry O-nenju.

Rev. Kikuchi is minister at Higashi Hongwanji Mission of Hawaii temple in Honolulu.