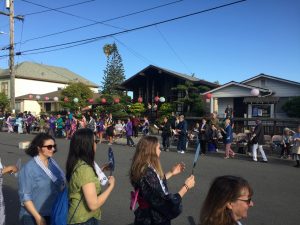 A crowd of people wearing Japanese clothing recently formed a circle on a Berkeley, California, street and began dancing, following the Buddhist observance “Obon.” Even more unusual, this was a gathering of two different Jodo Shinshu Buddhist groups—Nishi Honganji and Higashi Honganji.

For more than 30 years, the two Berkeley temples have held a joint Obon dance, each alternating as host. This tradition is ironic considering their histories rooted in conflict that resulted in their split—twice.

Since the 1980s, the Nishi temple, called Berkeley Buddhist Temple, and Berkeley Higashi Honganji, have co-sponsored an Obon dance. Each with a relatively small sangha (congregation), they came together to keep their respective Obon traditions alive. The dance has become a community event, attracting many non-members and non-Buddhists, who participate as a Japanese cultural activity and fun summertime event. More than a hundred dancers join in, along with spectators, curious neighbors, and temple volunteers.

For six decades, local well-known dance teacher Michiya Hanayagi led Berkeley’s Obon dance. Her daughter, Michisuya Hanayagi, has succeeded her by carrying on the tradition of teaching and leading the dancers.

Berkeley’s Obon typically is held the second Saturday evening of July. While other, bigger Obon observances are known as “Obon Festivals,” which include various foods, drinks, children’s games, crafts for sale and more, Berkeley’s event is focused primarily on dance. Both temples’ summer bazaars are on different dates.

Back in the 1900s, there was only one Jodo Shinshu temple in Berkeley (Nishi Honganji) that primarily served Japanese immigrants. In 1926, a group of families broke away from the temple because of a dispute over management of a Japanese language school. Those families began meeting in a nearby community center. They asked Higashi Honganji headquarters in Japan for a minister to serve them, and thus, Berkeley Higashi Honganji was born.

Four hundred years ago, during Japan’s feudal period, before Japan became a unified country, samurai armies battled against one another for territory. At that time, there was only one Honganji organization, whose main temple was located in Osaka, at a spot later occupied by Osaka castle. The temple had its own militia, which held its ground against samurai leader Oda Nobunaga.

After Nobunaga was assassinated, his successor Toyotomi Hideyoshi negotiated a truce, agreed to by Honganji’s abbot. However, the abbot’s eldest son and presumed successor, Kyonyo, was distrustful and held out a while longer. The father was given land for a temple in Kyoto, which became Nishi Honganji. Later when Tokugawa Ieyasu became Japan’s ruler, he gave Kyonyo land for a temple also in Kyoto, which became Higashi Honganji.

Nowadays in Berkeley, those conflicts lay far in the forgotten past. Instead, the two temples have formed a strong bond that helps preserves what is now a Berkeley community tradition.

Rev. Yamada is editor of Shinshu Center of America.